I don't know about you, but I’ve found that original 1930’s and 1940’s knitting patterns are becoming increasingly difficult to find.  I know that, you can get photocopies of patterns on Etsy and eBay but I’ll admit that I’m a bit of a pattern snob and while I will knit from copy patterns to protect the original, I still like to collect the genuine article.
If you are after an original, they can cost a pretty penny on eBay.  Take this one for example.
﻿ ﻿
I’d had it on watch for a few days and it had stayed at a nice low price but just before the auction ended, it jumped to £9.51!  When you take P&P into account, that’s over £10 for one vintage knitting pattern!  Now, don’t get me wrong, I would have loved to have added this to my collection but the vintage pattern enthusiast in me did battle with the bargain hunter and the bargain hunter won!  Then there is this one!

However, although this one slipped through my knitting fingers, there were plenty that didn’t over the last couple of weeks.
First up are these two lovelies from the 1930’s. 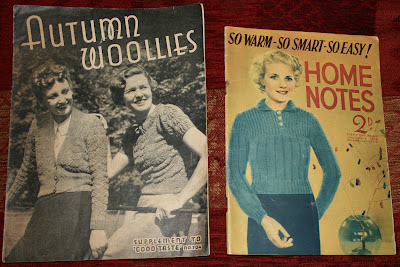 The Home Notes is more of a general magazine with some quite appealing recipes, apple snow or Japanese tartlet anyone??  It also has a page where beauty problems are answered, things like “A cure for warts”, “Remedy for Pimples” and “Am I too Thin” It only contains the one knitting pattern and that’s for the jumper on the front which is apparently “ easy to knit…….and can be made in a few evenings” hmm, we’ll see!  I love the language in this magazine, so very British, containing words seldom heard anymore.
The Autumn Woolies booklet is also a little gem.  It has some stunning patterns, graceful ladies playing golf and it contains a photograph which wouldn’t be allowed in advertising today! 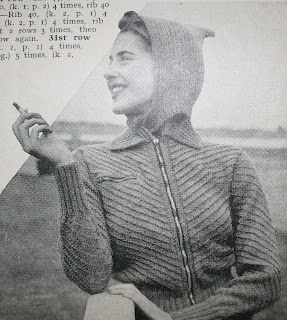 Next are 2 new additions to my Needlewoman and Needlecraft magazine collection.  Number 7 from 1941 and 12 from 1942.  Both are a little disappointing from a knitting point of view as there are no jumpers but they do contain home ideas using needlework (the title says it all really!) 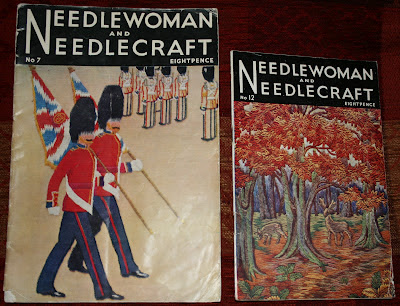 Next are 3 patterns bought at a bargain £1.00 each.  I already have the middle one and have knitted this jumper from it but this copy is in far better condition than mine! 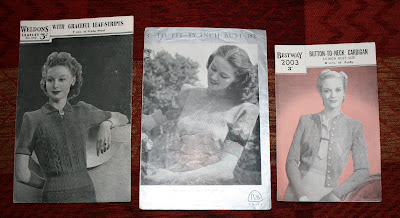 A simple cardigan and a neat bit of fair isle (not my favourite thing). 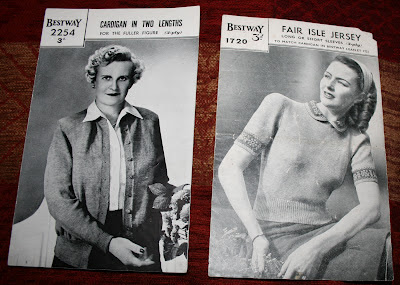 And last, but by no means least, are a batch of patterns that arrived yesterday.  I could have swung for the postie when he bent the envelope to force it through the letterbox.  Seriously, if it doesn’t fit, knock!  Thankfully, no damage was done to the patterns that I wanted and I’m over the moon with them.  I took a punt on these on eBay.  They had been listed as old patterns and there were just 2, long distance shots.  Lots of the patterns were obviously from the 1960s and 1970s but my eagle eye spotted some black and white ones hiding!  So, leaving the bidding to my other half (he likes to fight it out to the last second) I was pleased when I won them for just £6.60 plus £2.00 shipping.  Well, they were received today and I’m pleased to say that my eagle eye served me well.  Sure, I got a lot of patterns that I won’t be using so will pass on, but there were all of these…… 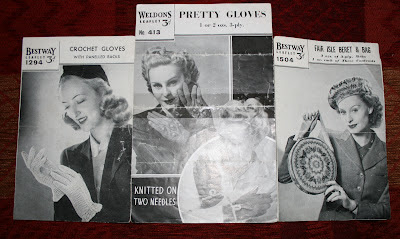 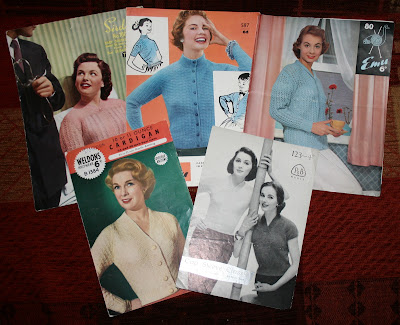 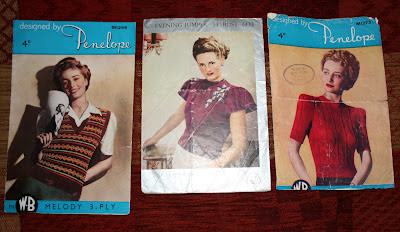 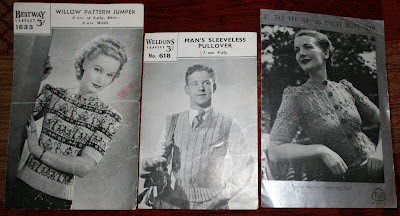 My favourite from the job lot are these 3. 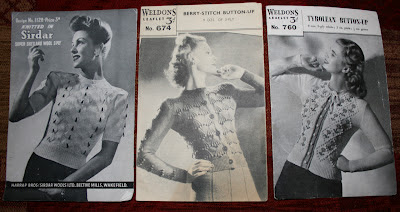 Measuring just 4.5” by 7”, they were produced during the war when paper was in short supply.  I can’t wait to pick some wool and make a start on the middle one!!
Along with patterns, I’ve also been buying fabric of the vintage kind and once I’ve taken a good shot when we get some sunshine, I’ll be back to share it with you :o)
Posted by Lucy at 04:12