I’ve had a ridiculously pants few days.  Things totally out of my control have got me down, and the post that I had wanted to do on March 15th is being done late and I don’t like it when things don’t go to plan.

However, I’ve finally found time, and energy, to get this together.  No vintage finds, no new makes, just a photo heavy post in remembrance of my brilliant , who would have been 90 last week.

Born at White House farm, Pettistree in 1922, was only 17 when war broke out.  Being a farmer’s daughter, she chose to join the Women’s Land Army.  She worked on the farm for the duration of the war, her older brother serving in the Royal Navy.

I always remember being told how hard work on the farm was, but how she loved it.  White House was a mixed dairy and arable farm and at just 18, was working alongside the older farmhands, the younger ones having gone into the services; she soon learnt to stand up to them!

Being born and raised on the farm, becoming a Land Girl seemed only right, but she was thankful that she didn’t have to relocate miles from home, like many Land Girls had to do.

Working in the Land Army gave a life long love of the countryside and as children, she taught us a lot about the world around us.  It was in recognition of my ’s life during WW2 that my Mum chose to re-enact WLA at 1940’s events.  Nan was proud of her contribution to the war effort, and it was in memory of her and all the other land girls that Mum donned her dungarees and set out to find out as much as she could about the WLA, in order to portray their role as accurately and respectfully as possible.

Goodness knows what my would have said if she could have seen us now! 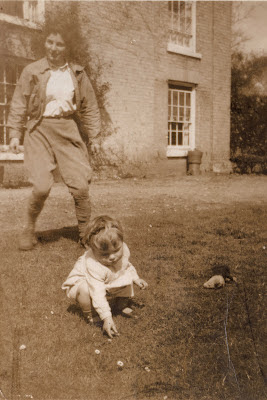