To all of you followers, old and new, thank you for stopping by and taking the time to read my blog, I truly do appreciate it.  2015 has been a beauty, and here's hoping 2016 is just as good.
Wishing you blessings and best wishes for a happy, healthy 2016! xx 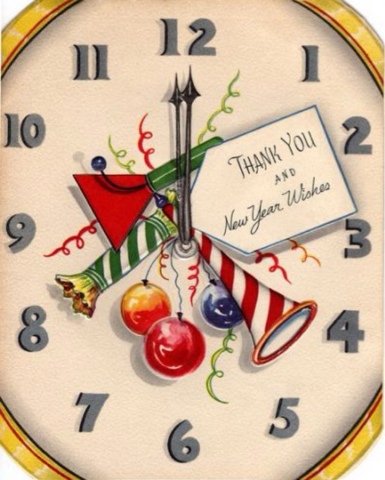 So, the big day itself has been and gone, and now we're enjoying the restful gap before the New Year.  I love the few days after the craziness of the Christmas buildup.  We tend not to make many plans and spend most of the time just the four of us, going for walks, picking our favourite festive flicks from the Radio Times, and eating far too much!
It's my birthday tomorrow so Mr Y has taken the girls shopping for a few last minute bits so I have some peace and quiet.  Rather them than me battling with the crowds of sale shoppers!
We had a wonderful time with family this Christmas.  This year, just like last, I decided to make a homemade gift for my nearest and dearest.  And this year, again, just like last, I left things a little late, so was still finishing off the final gift on Christmas Eve.
As well as the staple foodie makes and bakes that have to be thought about at this time of year, I decided to make Miss C a dress from a rather delightful polar bear fabric from John Lewis. 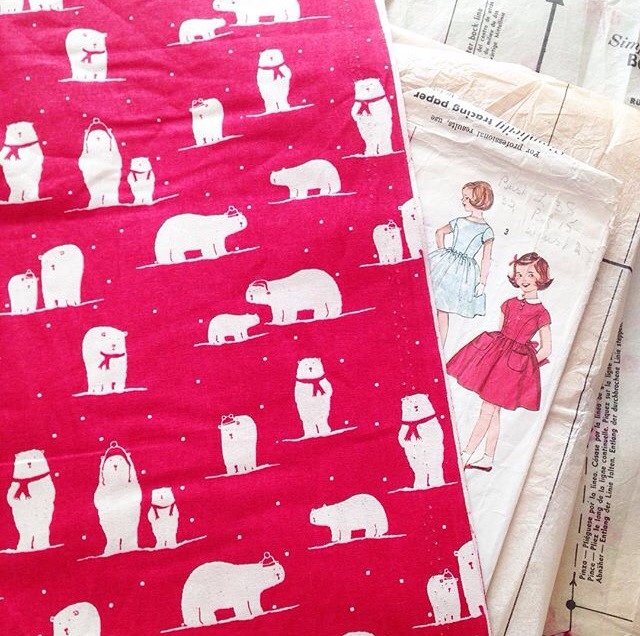 There was a slight hiccup with the fabric, and they sent 75cms less than I'd ordered.  A few frustrating phone calls, an email and finally a PayPal complaint later, I received my correct quota of fabric, and was told to keep the original lot, which meant Miss M got a dress also. 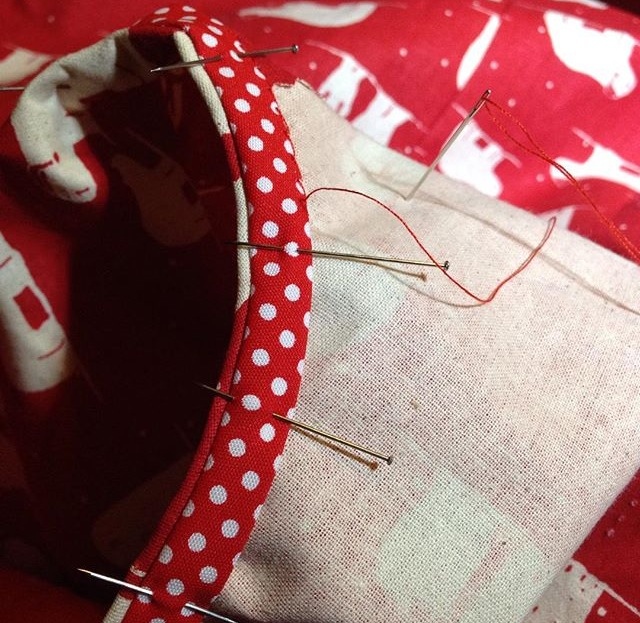 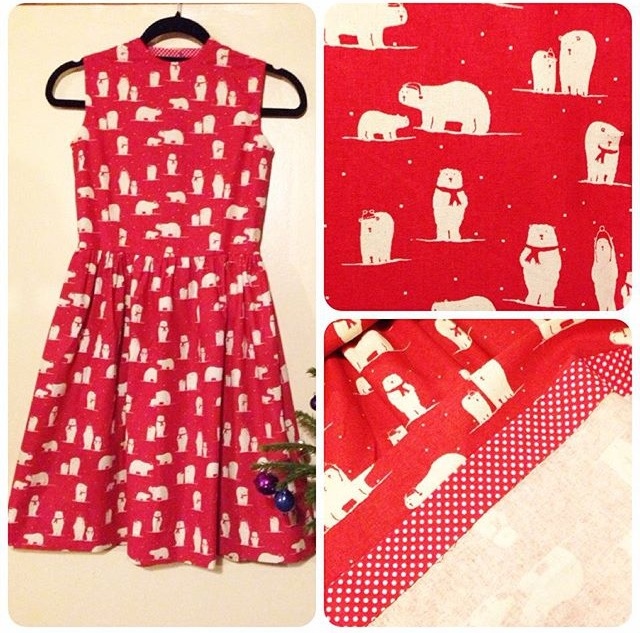 Miss C also took a fancy to a collar in an old Mollie Makes magazine from last year, I think. 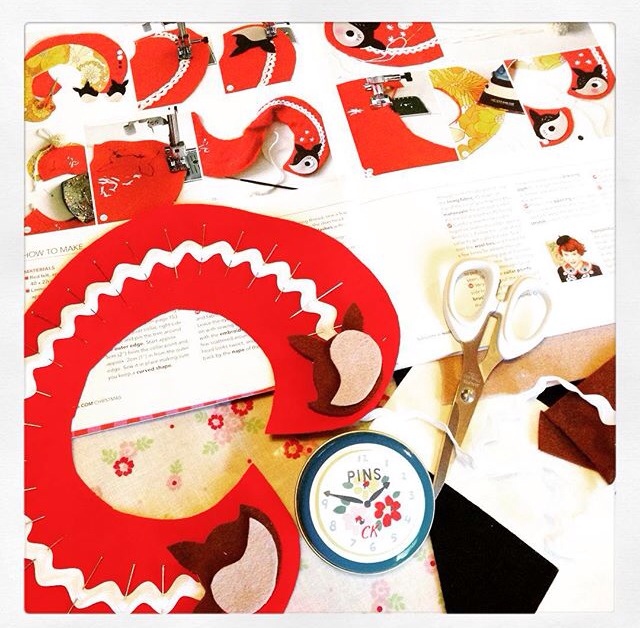 I had to resize it quite a lot, but Miss C loves it.  Miss M wasn't at all impressed, so no need for a second one. 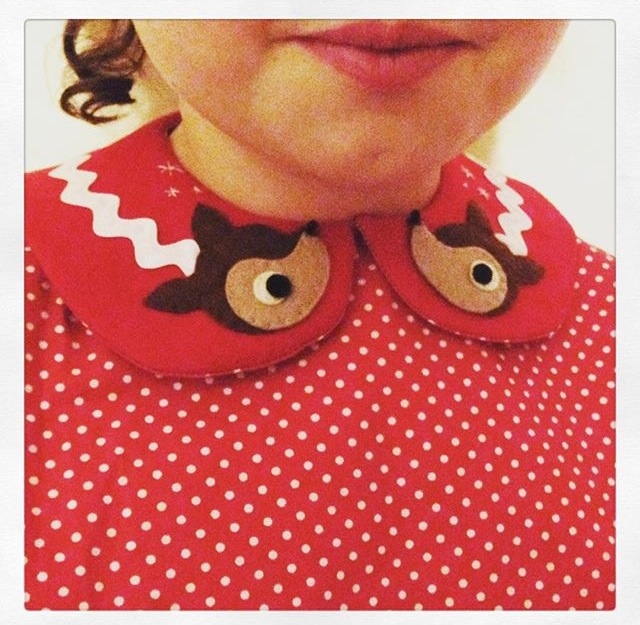 For their actual handmade Christmas gifts, I opted for a cot quilts.  Back in the summer I made a start on a quilt for Miss M's bed using hexies.  Seriously slow going, I knew it wouldn't be done in time for Christmas, so went for a quicker, smaller, machine worked version for her baby boy doll.
Having never tackled quilting before, I didn't know what to expect.  I used a mix if vintage, vintage design reproduction cottons and scraps of dress fabrics they'd had over the years.  I used 2" squares, and learnt as I went along. 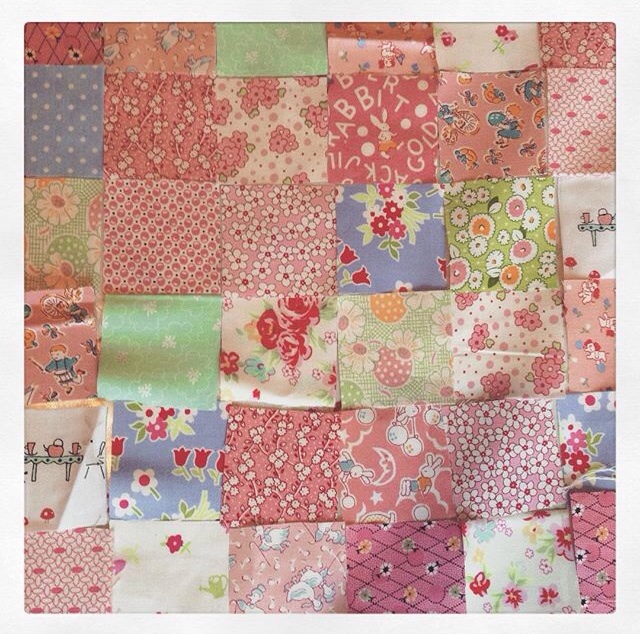 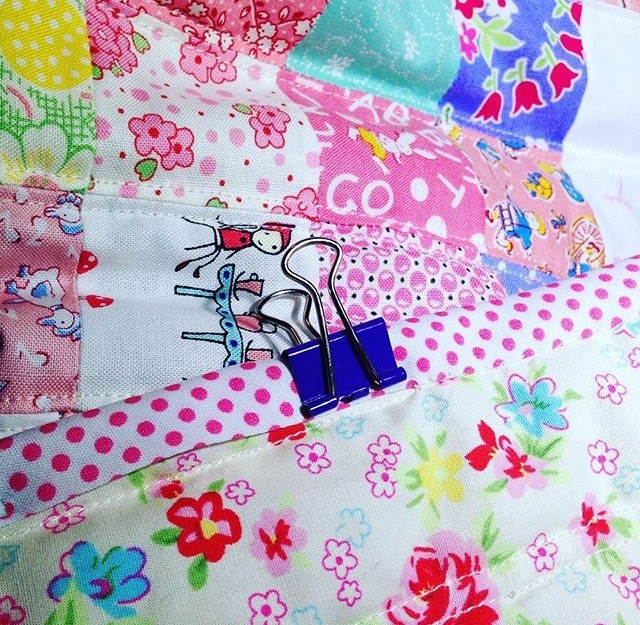 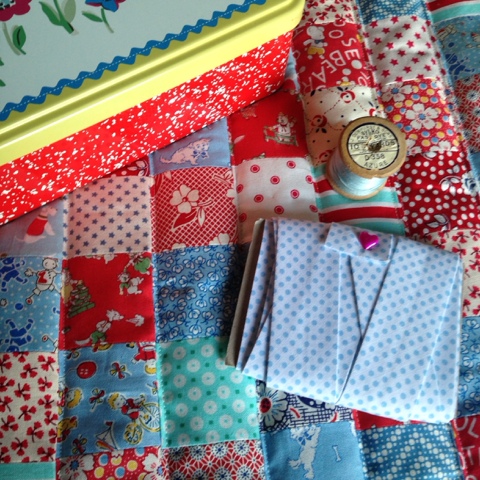 The binding was a pain in the behind.  The binding wasn't bias binding so there was no give or stretch.  The corners are poorly done, but the girls didn't notice and were over the moon with them. 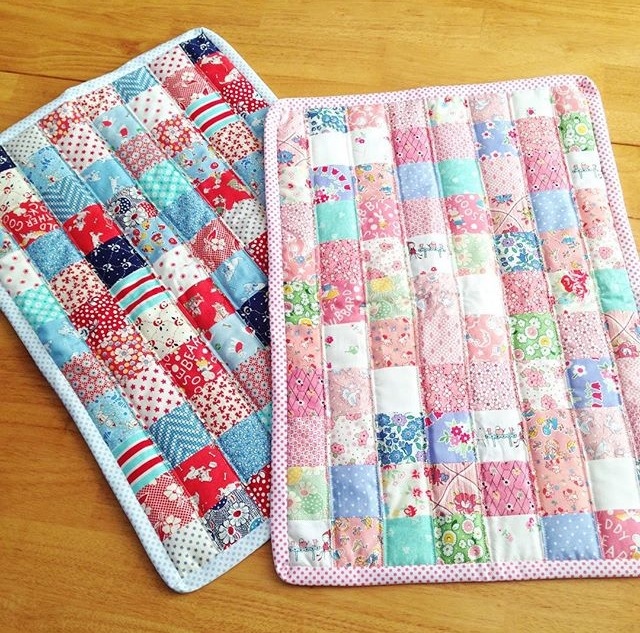 My dad is never an easy option for makes, and it has to either be edible or knitted.  I went for the knitted option and picked what I thought was a relatively easy Fair-isle. 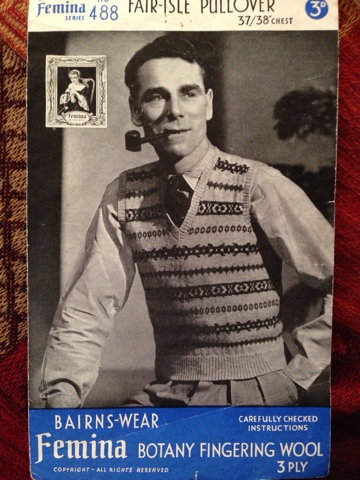 I cheated and made the back plain, and that knitted up really quickly, but the front was somewhat different.  I prefer to work Fair-isle from a chart, so where there isn't one, I make one.  The first pattern was a simple one but the second just wasn't turning out right.  I sought help from a friend who was an absolute wonder.  She not only found out what the problem was, she charted the whole pattern for me!

Once the pattern problem had been fixed, I was able to start the serious work of knitting. 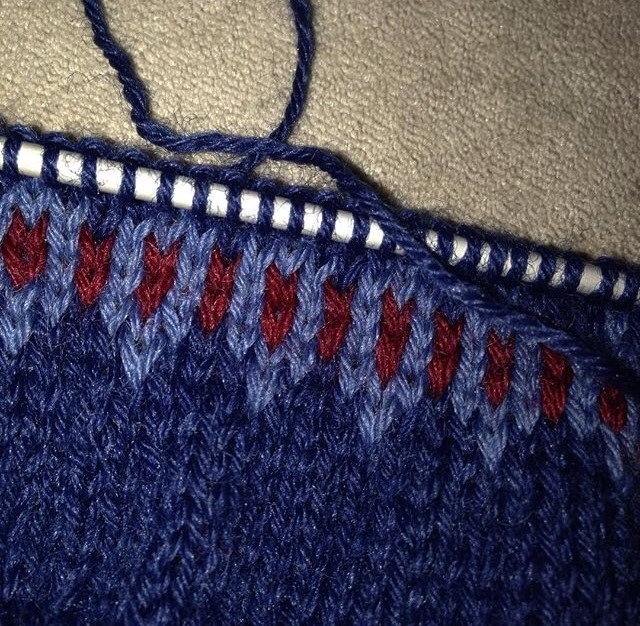 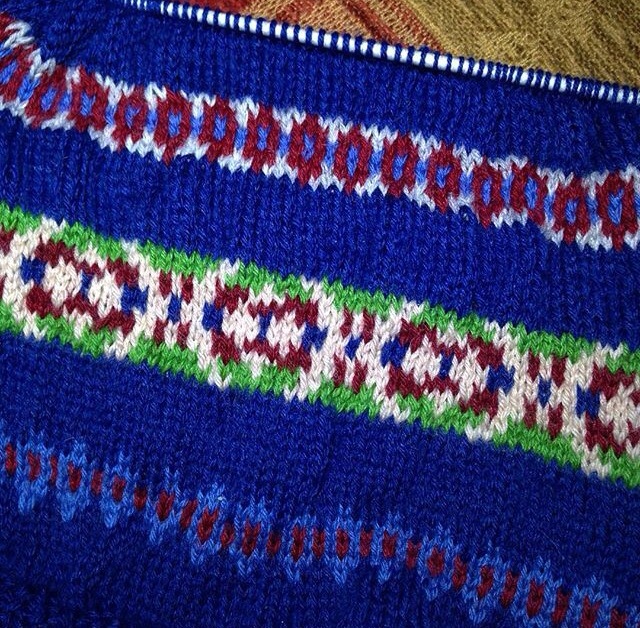 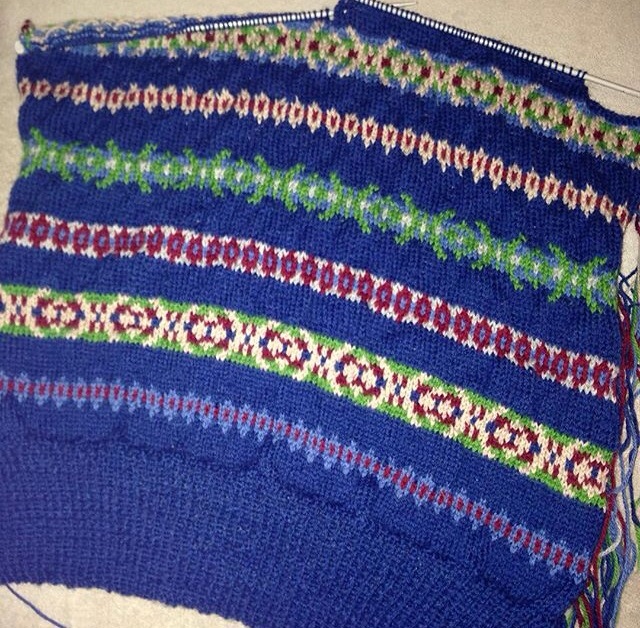 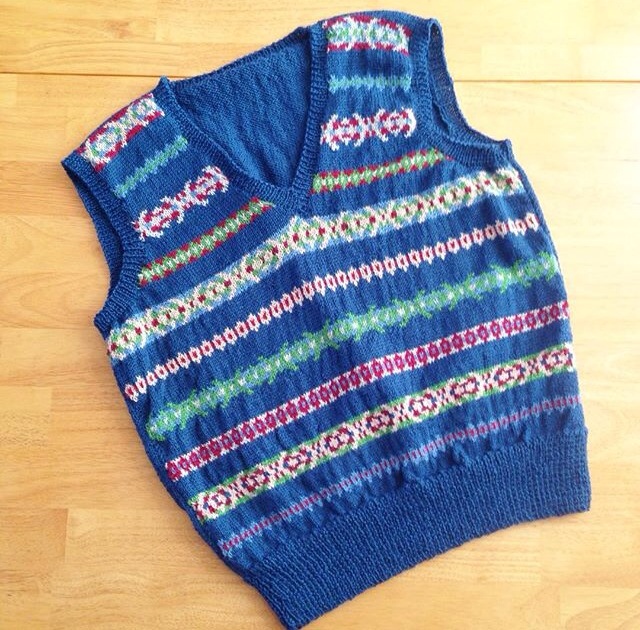 My most favourite gift to make, by far, was a bag for my amazing mum. Ever since I saw this picture on Pinterest, I knew I wanted to replicate it. 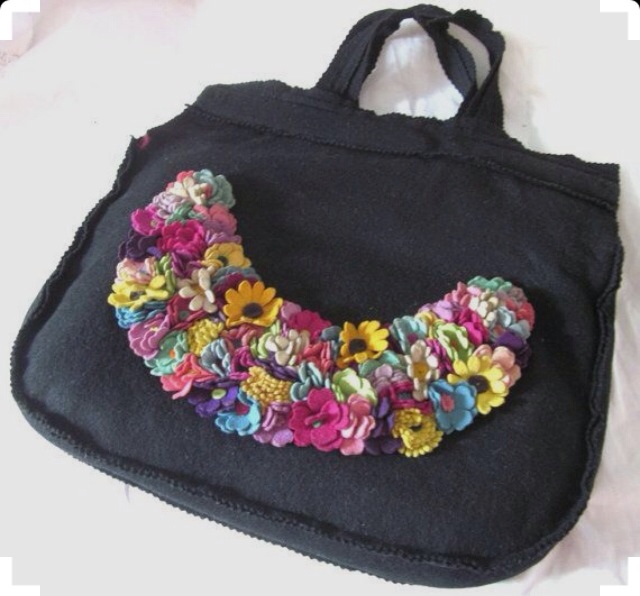 I dug through my felt stash and found some beautifully thick 4mm wool felt yardage.  I drafted the bag and flower shapes by hand and set about picking the right colour felt to match a piece if 1940's rayon silk that I had chosen for the lining.
I stayed up very late on the 23rd of December to get as much done as I could. 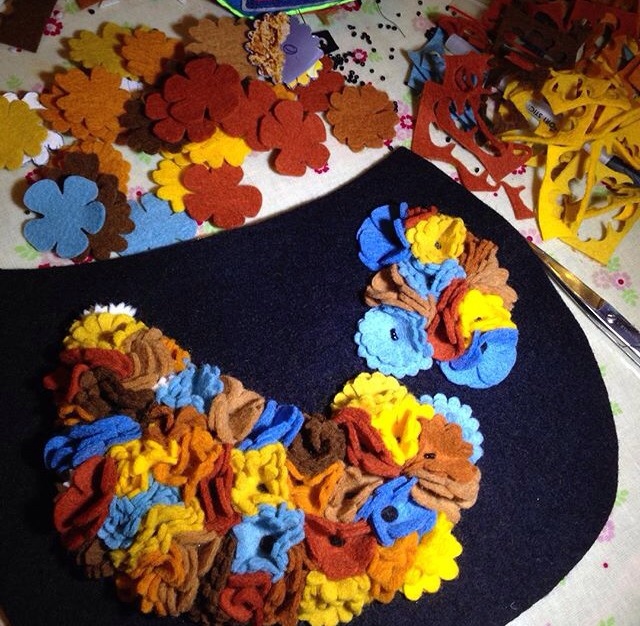 It was finished on Christmas Eve, and 100 hand cut flowers and 150 beads later, this was the result. 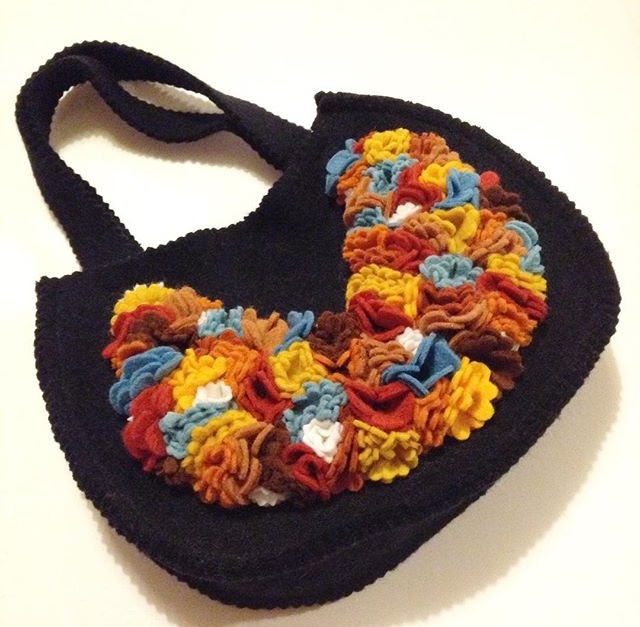 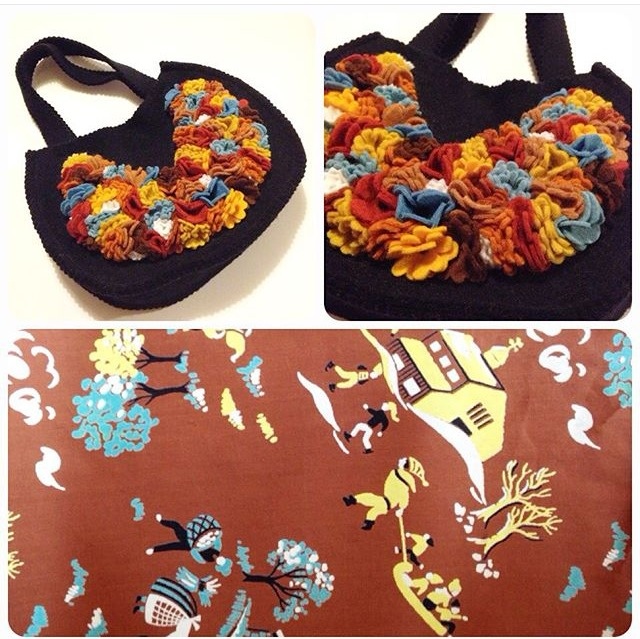 I love it so much, that I may just have to make one for myself!!
All the gifts were well received, which made all the hard work worth it.
I hope you had a fabulous Christmas, however you celebrated xx
Posted by Lucy at 11:52 10 comments:

Well, it's been a while.  As we approach the last few weeks of 2015, I figured that if I didn't dip my toe back into the world of blog, I never would!!  So, here I am, and what better post to bring you than a neat little knitted number.

Many months back, a fabulous customer of mine asked me to knit her a cardigan.  To my joy, it wasn't just any cardigan, it was one of the most pretty patterns I've seen in a long while, a pattern that had been on my rather long "to knit" list.

The pattern came from a Needlework Illustrated magazine from the 1930's. 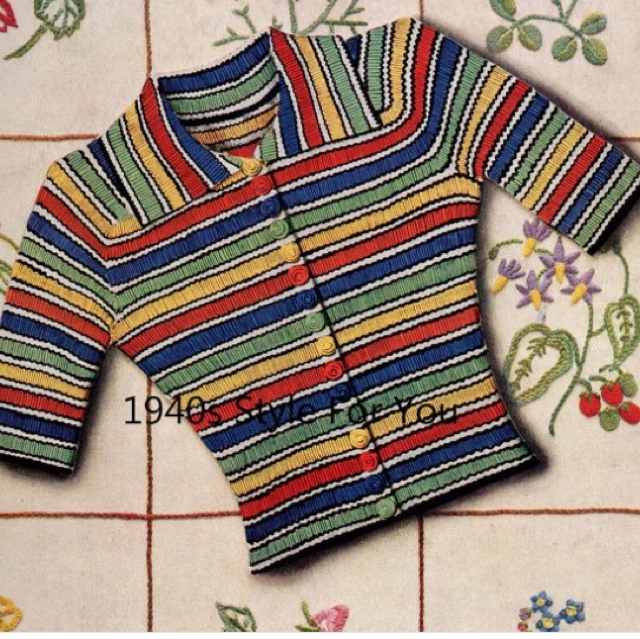 Pretty neat, don't you think?!  It was love at first sight.  The colours, the style, those sweet little buttons, I knew I had to knit it.

The customer wanted it to be as close in colour to the original as I could make it. Luckily, Adriafil Azzura had nigh on the exact same shades, and a little colour test later, and we were sold on the design. 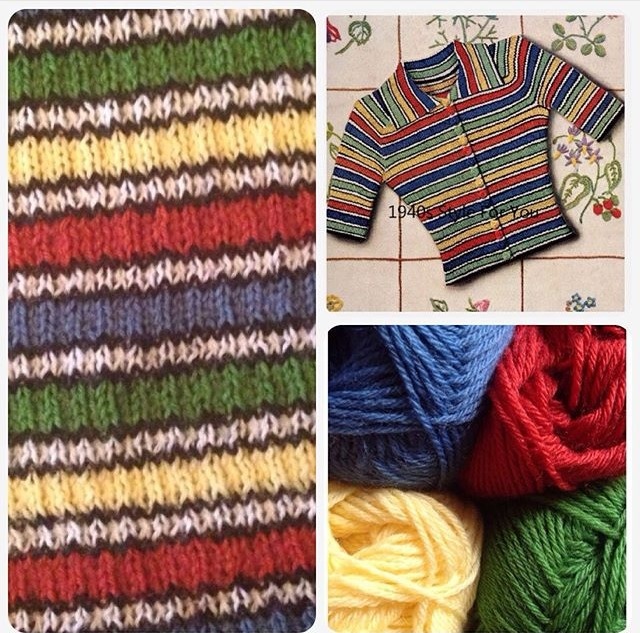 When you look at the cover photo, it clearly shows that there are four base colours in wide stripes, with thin black rows and slightly thicker white, in between.  However, when I came to work from the pattern, it wasn't turning out the same.  In the pattern, the four strong colours were worked in equal thickness to the white, and the result just didn't have the same wow factor. 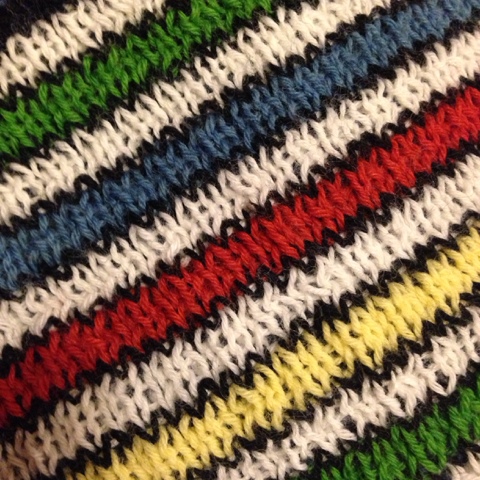 As the customer had seen the cover image with the thinner white stripe, I had to rework the pattern slightly, tweaking the thickness of the black and white rows and making it just a little bit longer in the body, for comfort.

The pattern isn't difficult, as the entire cardi is worked in rib, but the constant colour changing slowed the work down a lot.  That, and the fact that a made a mistake halfway up the back and had to re-knit it meant this one took nearly 4 months of on and off work.
Thankfully the customer was unbelievably patient, which I always appreciate.
Making up the jumper was a bit quicker, but oh so many ends to sew in..... 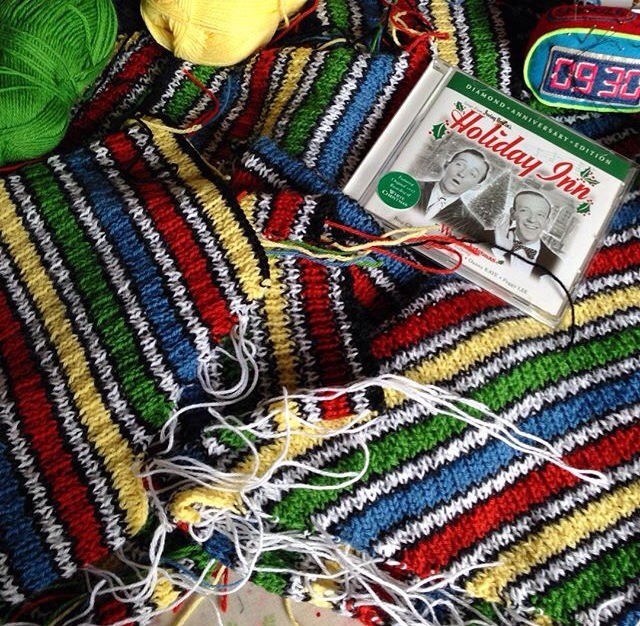 And the construction was different to anything I've sewn up before.  The top of the sleeve becomes the yoke, and there are two pleats in the sleeve, which take out some of the fullness and give it a neat finish. 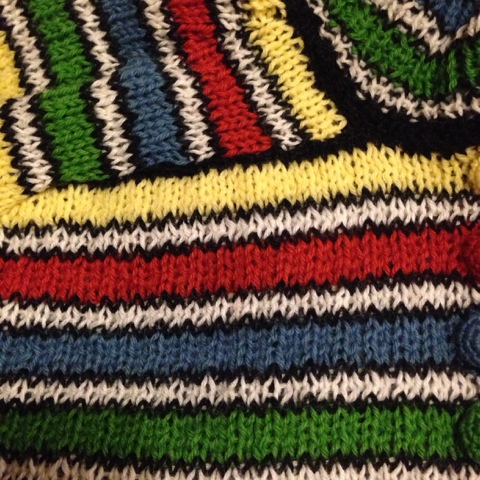 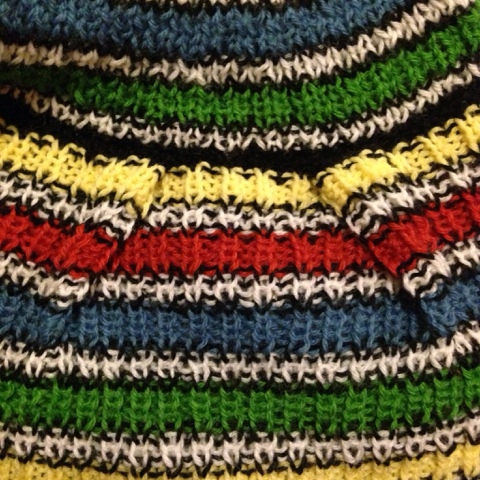 Crochet isn't one of my strong points, but the buttons were pretty simple to work.  Double and treble crochet worked round little button forms, they finish it off perfectly, I think. 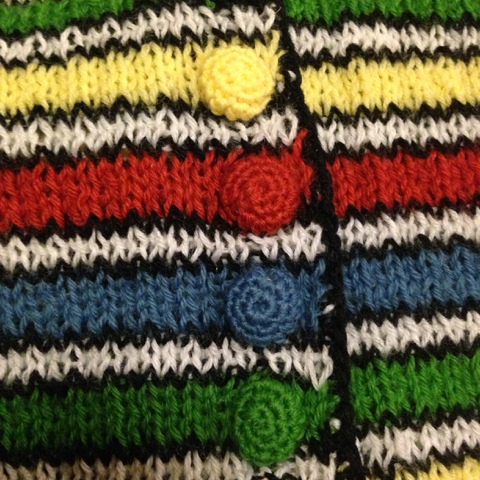 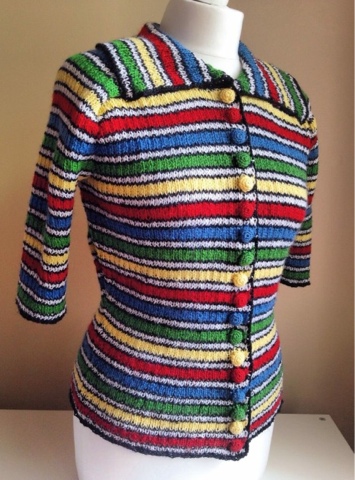 If you fancy giving it a go, the pattern is available for sale in my Etsy shop, which she can find here. It's not a complicated pattern, it could certainly be tackled by a beginner knitter, but it does take a lot of patience running in all the ends, but it's worth it!