About once a year, if that, the little Y’s go and stay with their grandparents.  It’s not a long way away, about 10 miles, but at 6 and 4, it’s a big adventure.  The overnight stop usually coincides with Christmas shopping so we can head off without 2 pairs of little peepers but this time, we’re off to see a show, a rare occasion.
The house is so quiet and I had thought I’d be rejoicing that I wasn’t standing on Lego mini figures or hearing the clatter of beads hitting the floor.  However, I am not.  It’s very strange and I’m actually missing them!
I know they’re in safe hands though so, sitting here with heated rollers in and my head feeling way too top heavy, I thought I show you some (well quite a few) of the patterns that I’ve recently purchased!
Much to Mr Y’s dismay, I’m always on the lookout.  I trawl eBay, charity shops and vintage fairs, with limited success.  EBay is full of copies but, don’t get me wrong, I like to knit from copies, I want (I’m always trying to get the girls not to say “want”) originals.  So, imagine my delight a couple of weeks ago when I found a lady selling no less than 60, individually listed 1940’s patterns!  I actually let out a little scream!  They were in good condition and I could have taken them all home but for the prices they ended up going for, that would have cost over £360!!!!!  The  listings began to finish at 4am, yes seriously!!, I couldn’t justify setting my alarm for such an hour.  Instead, I entrusted the bidding to Mr Y, who’s always up until midnight, and headed to bed.
I awoke the next morning to confirmation that I’d bought 23!!!  I not so patiently awaited their arrival but I was out when the postman tired to deliver them.  The sight of the little red card on the doormat brought about much moaning from me as to why you have to wait 24 hours before collecting, why the sorting office isn’t open Sundays, why did we have to go and do the shopping when the postman would be calling etc, etc, etc….
When I did get to collect said patterns, I was on the way to take the little Y’s to play with friends in the park.  I can honestly tell you that I didn’t let go of that envelope for the entire time I was there!  Even in the play area I abandoned my handbag on a nearby bench to push littlest Y on the swing, but still had, firmly clutched in my paw, said patterns.  I can tell you, pushing a swing while holding patterns is a skill I have not yet mastered!!
When I finally got round to opening the envelope some 6 hours later, I was not disappointed.  Look what I bought….. 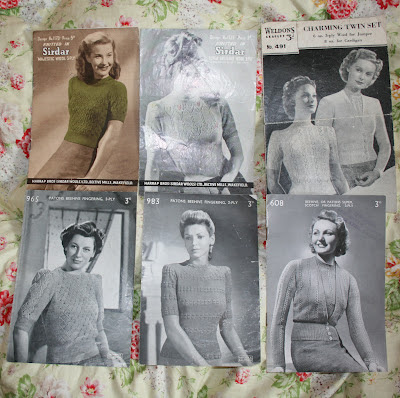 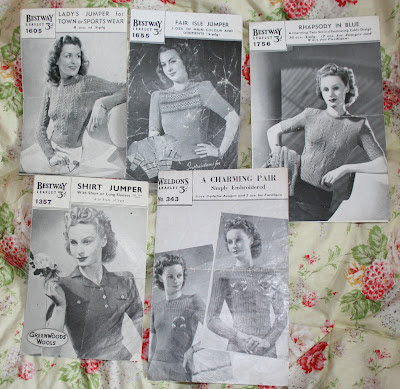 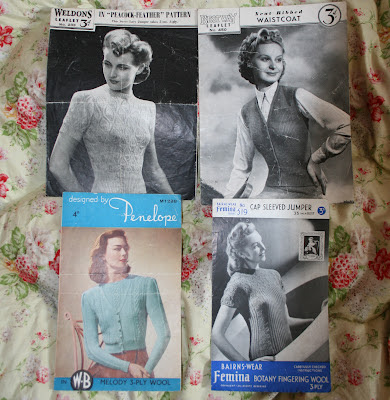 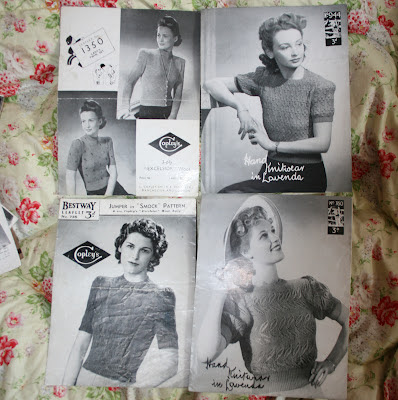 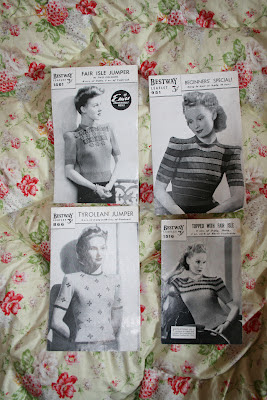 There are some beautiful ones and I can’t wait to give some a go!
In addition to the above, I also found a few more patterns, again, on eBay. 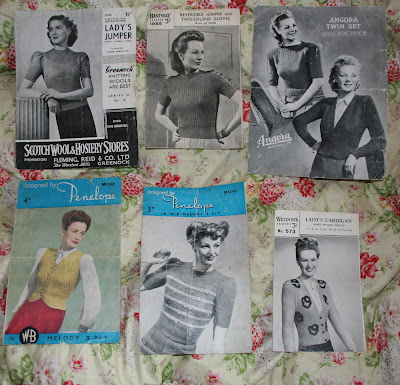 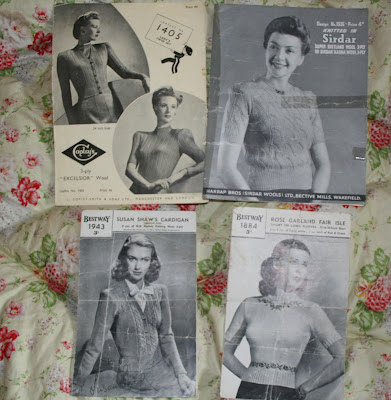 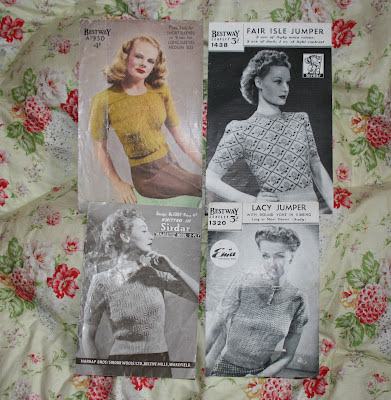 Some, like the with flowers on, I’ll never attempt.  Other’s like the one with the sunray yoke, are high up on my “to do” list – which is for ever getting longer!!
Not one to miss the men out, I also bought these.

The one on the left, I hope to knit up for my Dad.  I have knitted this one for him before, but he’s now keen on having one in different shades.
I hope you like the patterns or am I the only one who can’t resist a vintage pattern – or two?? ;o)
Oh, don’t forget that the competition for 200+ Facebook followers ends tomorrow, check it out here.  Winner to be announced over the Easter weekend!!
Posted by Lucy at 07:34