Over the bank holiday weekend, between dodging yet more rain, entertaining my family for my Mum’s birthday and knitting until I felt that my fingers would fall off, I found time to watch, for the millionth time, Victoria Wood’s brilliantly written “Housewife, 49”.

The ITV drama is based on the diary that Nella Last, a housewife from , sent in for the Mass-Observation project, that was run during the Second World War.  I watched the drama a number of years ago and was so intrigued by the life of this everyday lady that I nipped onto Amazon, as you do, and bought the book “Nella Last’s War”.  It’s simply brilliant.  It was a book that I just didn’t want to put down and this is what the blurb says;

“In September 1939, housewife and mother Nella Last began a regular diary that lasted for thirty years.  The account that she left of life during the Second World War is moving, fascination and unique.  While Nella’s younger son joined the army, she and the rest of the family tried to adapt to the transformed rhythms of life in , which suffered terribly from enemy bombing raids.  Writing each day for the “Mass-Observation” project, Nella grows in confidence as a result of her new work, and her diary entries tell a powerful story about the war years, covering everything from sex to the genuine fear of invasion.  This was the period in which Nella turned fifty, saw her children leave home and reviewed her life and her marriage – which eventually she compared to slavery.  This is the war as Nella Last lived it.”

The drama is as wonderful as the book, brilliantly written and incredibly well acted.  Victoria Wood is just brilliant.  There are so many things I could waffle on about, the little details in the sets, the enamel kitchen goodies, the bakelite items and a 3 piece suite, once owned by my parents, that was exactly the same as the one in Nella’s living room.  However, what I really want to share with you are the amazing jumpers.

There are quite a few pictures coming up and, unfortunately, the quality isn’t that good because my camera didn’t want to take clear pictures of my TV screen – stupid thing!

Anyway, first up is one worn by Nella Last’s sister in-law on what was meant to be Christmas Day 1939.  The dark chocolate and pink go really well together, I'd like to replicate it one day. 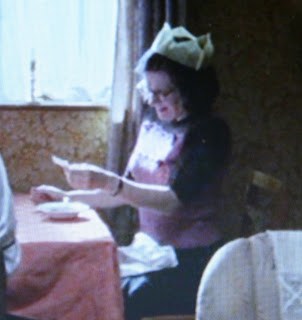 I actually have the pattern for that very jumper!  It might be that mine is a re-issue of a 1930’s pattern but I actually think the pattern is from the 1940’s.  What do you think?? 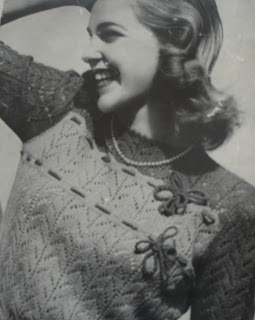 The sister-in-law also gets to wear another beautiful jumper.  I believe it’s a Lavenda pattern and is called the rainbow jumper.  I have seen it knitted up before and it’s so pretty but I haven’t found a copy of the pattern yet – I shall keep looking! 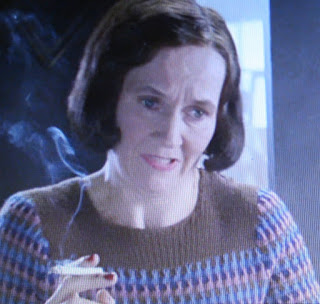 There are plenty of other lovely jumpers, stripy affairs, lots for men, both fair isle and cable but I especially liked these two as well. 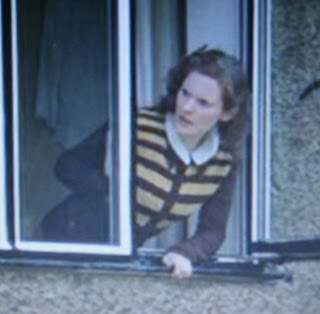 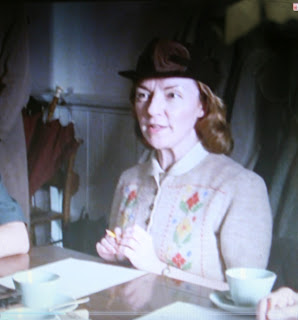 Out of all of the costumes, my favourite woolies were worn by a character called Evelyn.  She got to wear some beautiful pieces. 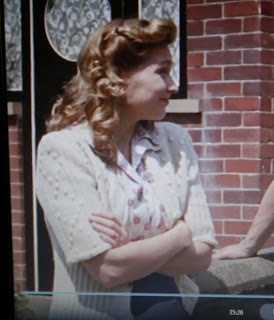 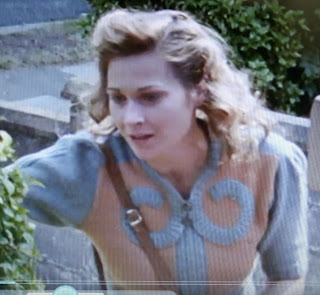 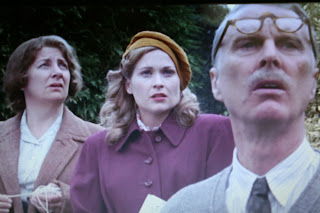 How beautiful is that mustard coloured beret?!  If I could find a pattern for that, I would be a very happy knitter :o)
Posted by Lucy at 11:12