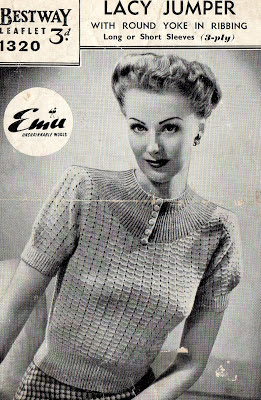 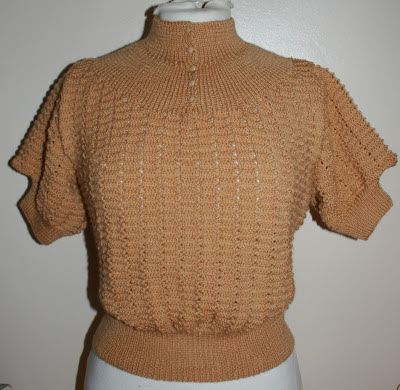 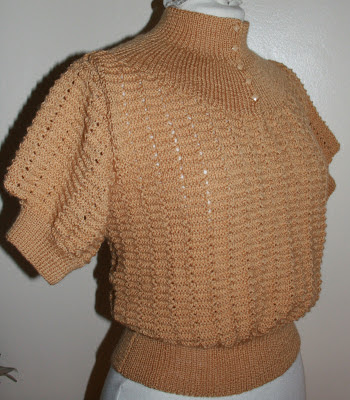 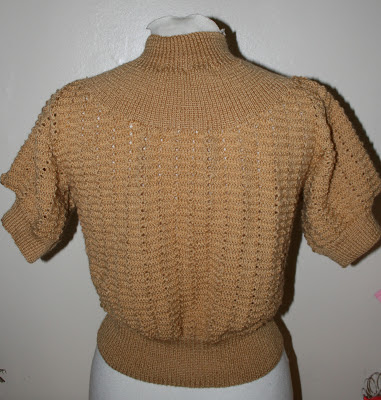 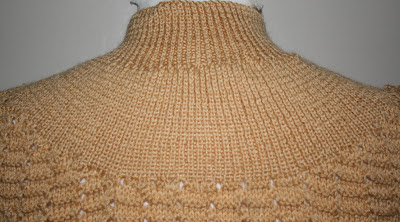 The sleeves have an interesting little bit of detail which I've never seen on a jumper before.  Quite sweet don't you think?? 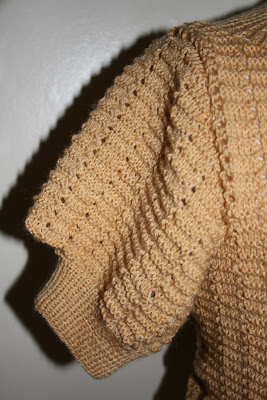 I cheated a little on the buttons.  The original called for tiny crocheted ones but I had the most perfect little glass 1930's ones and so opted to use them instead.  I need to tighten the button holes a little because the buttons are so tiny but I don't think I could have colour matched them any better!

I'll be taking the jumper to our first fair of 2013 which is "The Old Hollywood Vintage Fair" which is being held on March 10th in Norwich Cathedral - I'm SO excited :o)!!

If you fancy knitting this pretty little jumper for yourself, I hope to get the pattern posted up by the end of the week thanks to the help and words of wisdom of the lovely fellow bloggers who emailed me!
Posted by Lucy at 13:16 7 comments:


So, today, this beautiful little lady of mine is celebrating her birthday.

However, instead of enjoying the vintage tea party we had planned for her (a celebration entirely of her choosing) she has succumbed to the flu and is sleeping soundly on the couch.

She hasn’t been able to get excited about anything; not the snow flakes which have been falling on and off throughout the day (yes, it’s been snowing AGAIN!) and not the toadstool house cake I made for her which she had planned months ago. 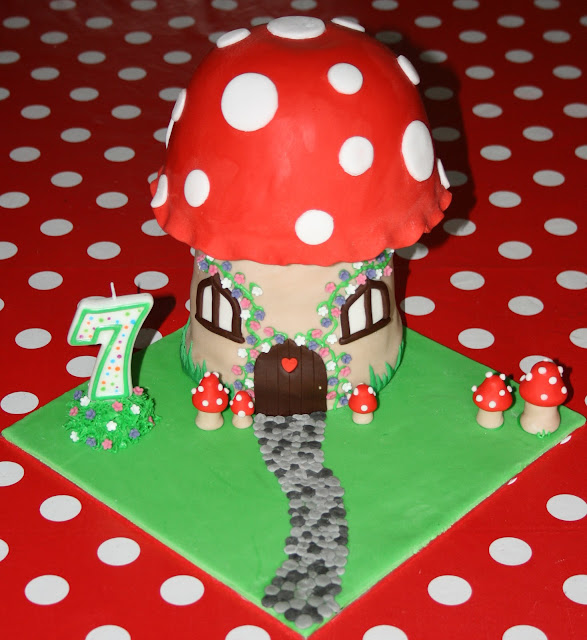 I’ve reassured her that it’ll be waiting for her when she’s better but it’s not the birthday she had planned which is such a disappointment for her because birthday’s are so important when you’re 7! :o)

The flu she is suffering with is the same one that saw me out of action for a few days, hence my Internet absence.  Mr Y and my youngest also have it and all three are now sleeping soundly.  The house is eerily silent, apart from my fingers clicking on the keys.

Being ill and then running round after three bug ridden people, I haven’t really achieved much in terms of making and I haven’t done anything interesting; things have been pretty boring! :o)

However, although I don’t have anything completed to share with you, I do have a number of “works in progress” shots, “sneak peeks” if you like!

First up is a really pretty jumper from a 1940’s Bestway pattern. 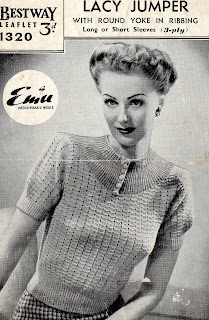 It’s been knitted in Stylecraft 4ply in a shade called butterscotch.  It’s a relatively new shade in the 4 ply range and I’m really impressed with it.  It’s so pretty and suits the 1940’s palette perfectly.  All the pieces have been knitted; I just need to sew them all together. 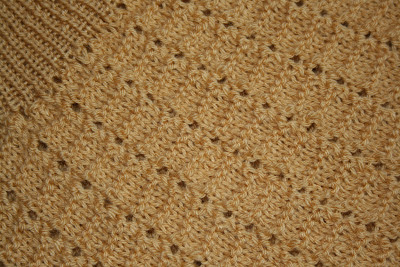 Next up is a waffle jumper, a design that I’ve used many times before, from a 1943 pattern.  Again I’ve used Stylecraft 4 ply, this time opting for aster, midnight and cream.  Aster is quite a bright shade and although I’m not a “blue” person, if you get what I mean, it’s actually turned out prettier than I expected.  Perfect with a little navy skirt or slacks perhaps? ;o)  All the pieces for this one are also finished so it’s just the sewing up that needs to be done. 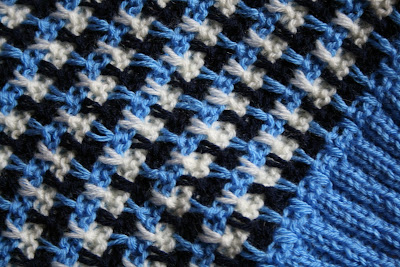 Last up, yet another waffle (I will never tire of this simple yet effective pattern).  Again, a Stylecraft 4 ply number, this time in black and cardinal.  One for Dennis the Menace perhaps??  This one was finished and I was about to sew it up when I noticed a mistake more than half way down the back!!  I’ve ripped it back and corrected the mistake but it's been put back in my work basket until I can face knitting it again. 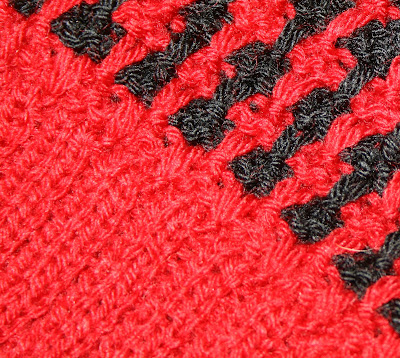 P.S.  I want to post some free knitting patterns on the blog but I can’t work out how.  If any of your clever people know a way, please email me on style1940s@yahoo.co.uk – I simply can’t work out how and it’s frustrating!


Well, what’s this then?  Could it be yet another jumper?  I know, I’ve surprised myself too.  No regular jumper postings for weeks and then two come along within days of each other.  I wouldn’t get too used to it though :o)!!

In truth, this one was actually completed in 2012 but it is such a fiddly little beastie to sew up that I’ve been trying to ignore it.  Out of sight, out of mind and all that!  You see, there are 12 pieces to the jumper and the 240 stitch long frills are tricky to attach.  Also, being such a dark brown, it wasn't something I could sew up in the evenings as I needed daylight.  As it is currently raining, snowing and hailing (how does that happen all at once?) light is somewhat of a problem and so I apologise for the poor quality of the shots that are coming up.

The pattern comes from a 1942 Stitchcraft magazine.  It was featured on the front cover which means we get to see the original in all its colourful glory.  I’d love to find just the right shades of green to replicate the original. 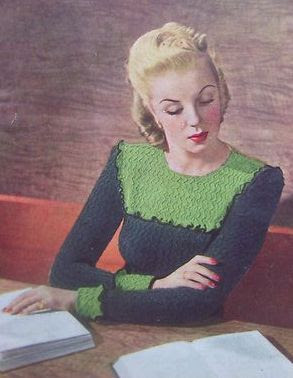 I chose Stylecraft double knit using dark brown as the main and copper as the contrast – a nice combination I think.  From a wool usage point of view, it didn’t use as much as I thought it would and only took 330g of dark brown and 140g of copper which leaves me plenty to make a two colour turban to match! :o) 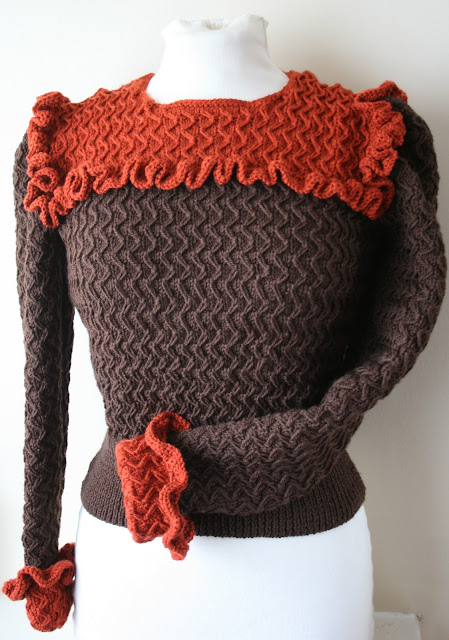 The stitch is more simple than it looks.  The pattern is basically stocking stitch with a row of slip stitches that you carry over 3 rows before shifting them forwards or backwards on the 4th row depending whether you want a zig or zag!

The neckline called for a row of double crochet, something I can just about manage, and the back opening is finished neatly with 3 original vintage buttons. 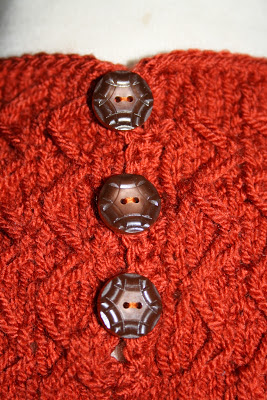 I do have an admission to make.  The frilly bits should have been cast off in the contrast yarn to give an added bit of detail.  I can’t remember the reason why they weren’t but I don’t think it really matters, they still look lovely. 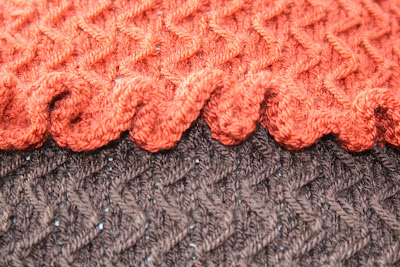 The design is one of my wartime favourites, which is why it's been done 5 times before! :o)  This is a lovely lady wearing my favourite green colourway :o) 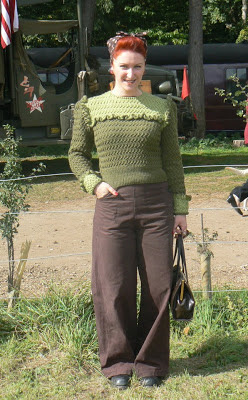 It never hangs around long and I'm hoping that this new colourway will be snapped up just as quickly!  With the weather taking a turn for the worse, it could be your perfect winter warmer :o)

In response to a couple of questions I got on my previous jumper post;  Yes I do actually sell my jumpers.  Primarily, I sell genuine 1940’s civilian clothing, shoes, hats etc but as a sideline, and a very popular one at that, I do sell the jumpers either at 1940’s events or occasionally on my Facebook page which you can find HERE.

A jumper to share with you this evening, my first completed one of 2013, although there are a couple more hot on it’s heels!

This time, a chunky woolly, perfect for the chill that has returned.  I wanted something simple to knit, you know, the stuff you can do on auto pilot when you're tired and lacking in brain power.  I opted for DK this time because, although I know 4 ply gives a more authentic ‘40s look, DK knit grows at a greater rate and sometimes, you just need that sort of satisfaction.

From my Stylecraft stash, I picked a lovely shade called grape and selected stripes of black, graphite and plum.  Nice combination I think. 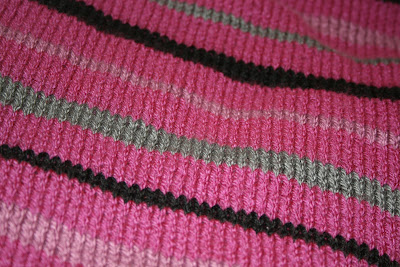 The pattern, although undated, is from the 1930’s and is by P&B.  I love the style of the jumper with it's full sleeves and deep welt.  I love the pattern so much that this is the 4th time I've knitted it! :o) 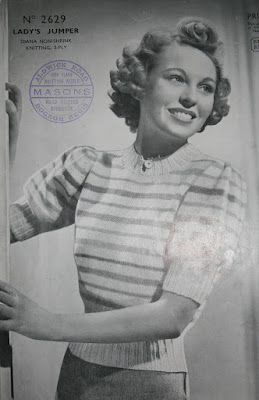 If you haven't worked with a vintage P&B pattern before, I would recommend them.  They are some of the nicest to follow and the instructions and clearly written.  This one has the added bonus that it instructs you to knit the first and last stitch on every so you end up with a defined line of stitches for sewing the jumper together.  I hope you like it. 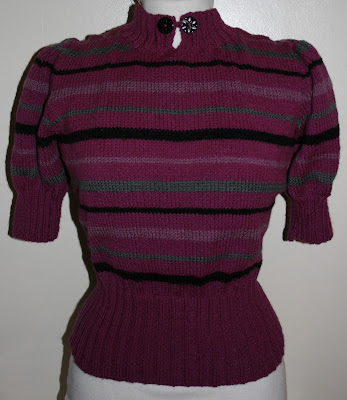 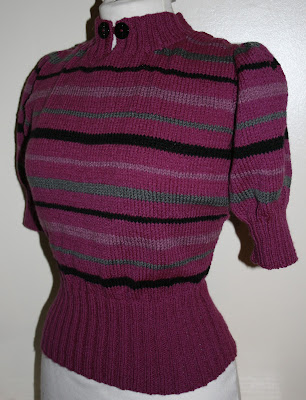 I love the double button closure at the top and think it finishes the jumper off a treat.  I would have liked them to have been bigger, more of a statement, but I couldn't find any black 1930's ones which were suitable and so ended up using some genuine 1940's buttons instead.  Still perfectly serviceable though :o) 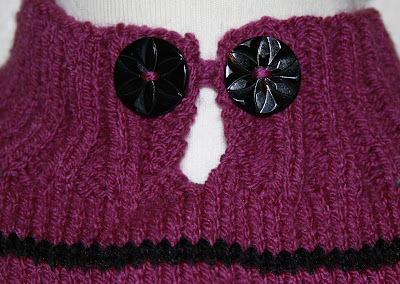 Slightly off topic but on the vintage front, we managed half a stock take yesterday.  As time consuming as it was, I thoroughly enjoyed perusing the rails of authentic 1940's frocks!  We also had a rummage in the hats and have picked out a few that will be for sale on our Facebook page in the next couple of days so do pop on over and take a look HERE :o)
Posted by Lucy at 13:50 12 comments: