Anyone For a Dip?

Well, that was a rather unintended absence from the blog, I do apologise.  I’m not entirely sure what happened.  It’s not that I haven’t been busy, for I have and there are so many things I want to share with you, but time simply hasn’t allowed.  The Easter holidays were all consuming and when Mr Y headed back to school, it took me a while to get back into a routine but I’m happy to say that we’re back on track, just!

We’ve been having much better weather in my neck of the woods.  Don’t get me wrong, it’s not exactly sun, sea and swimming costume season yet but at the rate this year is romping by, the summer will soon be upon us.  Day dreaming of BBQ’s and trips to the beach, my attention has been turned to a spot of vintage swimwear. 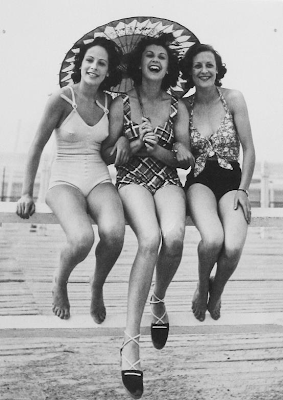 Up until the mid 19th century, popular male attire for an early morning dip was ones birthday suit!  Yes, seriously, swimming in the buff was not uncommon and it wasn’t until 1860 that the practice was banned – thank goodness :o)

For women, swimming attire was an entirely different, and frankly burdensome, affair!  During the 18th century, fashions of the day were for skin white as snow and exposure to the sun was discouraged.  Women would enter the water fully clothed in dress, shawl, gloves and a bonnet.  To protect modesty further still, some had weights sewn into the hems of their dresses to prevent the fabric floating to the surface of the water.  I can’t help wondering how many of them were pulled down by the sheer wet weight of what they were kitted out in!

As general fashions changed and styles updated and modernised, swimwear fashions followed suite.  However, up until the early part of the 20th century, the overriding theme of women’s swimwear was one of modesty.  It was deemed indecent for too much flesh to be on display and figure hugging attire was a definite no go.

By the end of the Victorian era, with rail travel made available to the masses, people flocked to the seaside to enjoy all that was on offer.  The cumbersome Victorian costumes of woollen dresses over bloomers hindered a wearer’s ability to actually swim and a revolutionary new design was required.
During the 1920’s, women gained greater freedom and relative equality than they had ever had before.  With their roles within the home and the workforce changing, swimwear designers were able to offer the newly empowered women a more feminine costume, designed to flatter and appeal.

﻿
﻿Costumes were no longer purely a thing of practicality or designed with modesty in mind.  As the decades moved on, the ‘30s and 40’s saw necklines come down and hems go up!  A costume was not simply for swimming, they became a thing of fashion, of play, of beauty; something to swan around in and look lovely :o) 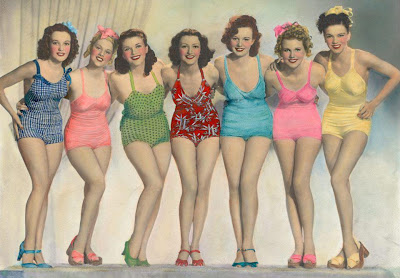 It was in the late 1940’s and 1950’s that swimwear design really took off.  With the invention of manmade materials, designers could, more than ever before, create a sculpted look.  The lovely ladies of the day could slip into something fabulous which had been designed with fashion in mind and would enhance and show off their assets rather than disguise and hide them. 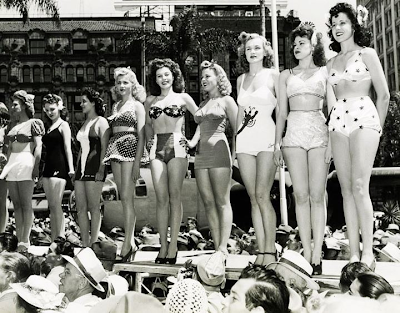 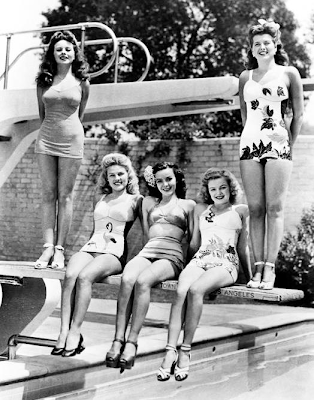 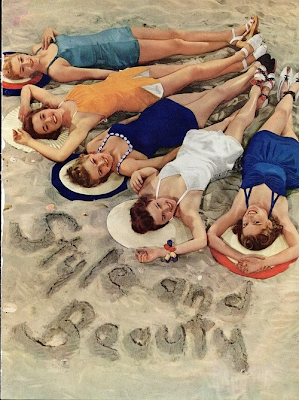 The swimming costumes of the 1940’s and 1950’s are not dissimilar in design to those we have today and those that you might well find in your own chests of drawers.

Part of the reason I’ve had a little delve into the history of the good old cossie is because I have been having a sort out of my vintage clothing mountain and have decided to part with 3 rather splendid vintage swimsuits.

For any of you who don’t know, I sell original 1930’s and 1940’s clothing (with a small amount of early 1950’s clothing thrown in for good measure).  In my journey to sniff out beautiful period pieces, I often come across little gems that aren’t from my preferred area, or that aren’t really what I sell, but that are just begging to be rescued and the three costumes that I am getting rid of are perfect examples of this!

My favourite of the bunch is a candy stripe cotton one which is from the 1940’s or 1950’s.  It is just divine, in near perfect condition, desperate to find a new home.  There is no makers label on this one so no history to go with it but it is deserving of a new loving home. 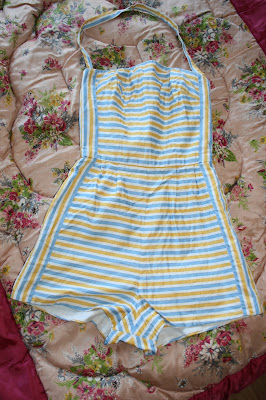 The other two are later examples, and part of the Rose Marie Reid range.  I’d never heard of Rose Marie Reid until I was looking up the label, as you do, and found out that she was quite a well know designer!  Born in 1906, she began designing swimwear in the 1930’s and by the mid 1940’s, 50% of all swimwear sold in had been designed by Reid – not bad in my book! :o) 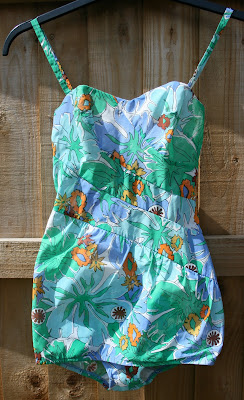 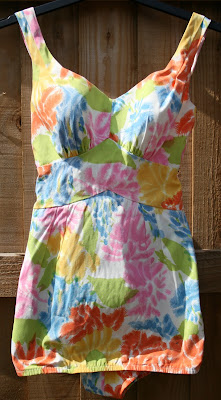 The costumes have all been put on eBay because I simply have no idea what they are worth so if any of you vintage loving ladies are on the lookout for a new costume to soak up the sun in, take a look at the listings which can be found here.