A spot of Make Do and Mend

I’ve been at it again with a spot of Make do and Mend!

A few weeks ago, we took a trip into the depths of rural to visit an incredible octogenarian with the most amazing collection of vintage clothing I have ever seen!

Setting eyes, for the first time, on the rails and suitcases stuffed to the brim with vintage goodies, I was rendered temporarily speechless (Mr Y only wished he had been there to enjoy the fleeting silence!).

Accumulated over a lifetime, this incredible collection is housed in the beautiful 14th century home that the owner of said collection was born and raised in.  A hoarder (her term) of things, as we happily chatted and rummaged, we were shown everything from the pixie hood she wore to school during the early ‘30s (now the prized possession of my eldest little lady) to a pair of green leather wedge shoes that she bought in April 1947 to go with a moygashel dress which, when the New Look came in, were suddenly out of fashion, but no replacement could be bought because she had no more clothing coupons!

The collection had been in storage for many, many years.  Many of the items were in beautiful condition but, as is so often the case with true vintage clothing, some pieces required a good wash, the odd stitch or too and a button here or new zip there.

I love, love, love what I do.  I get excited by every new find and could wile away many an hour looking at the structure and design of the clothing of the era.  We brought so many wonderful items home with us that to choose a favourite would be impossible but, for me, a definite contender for that spot is this amazingly bright 1930’s number. 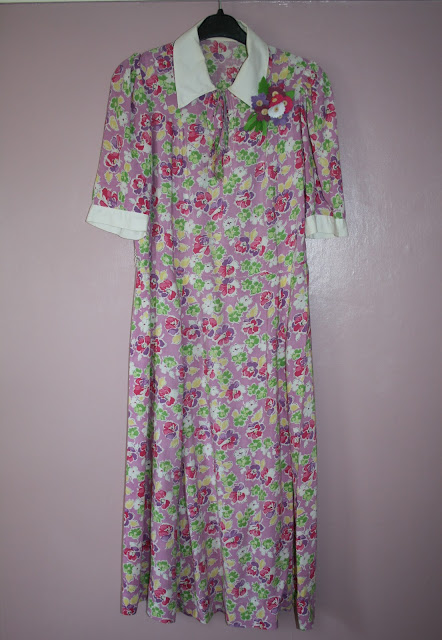 The dress is made from very fine cotton and was homemade during the 1930’s.  The lady recalled, with great zest, how she disliked it greatly and had had a preferred alternative.  With the crisp white collar and sleeve trim detail, I love it, and such bright colours; stunning. 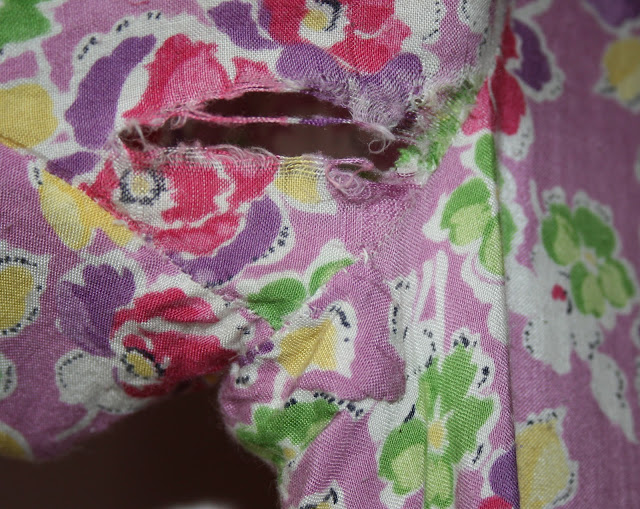 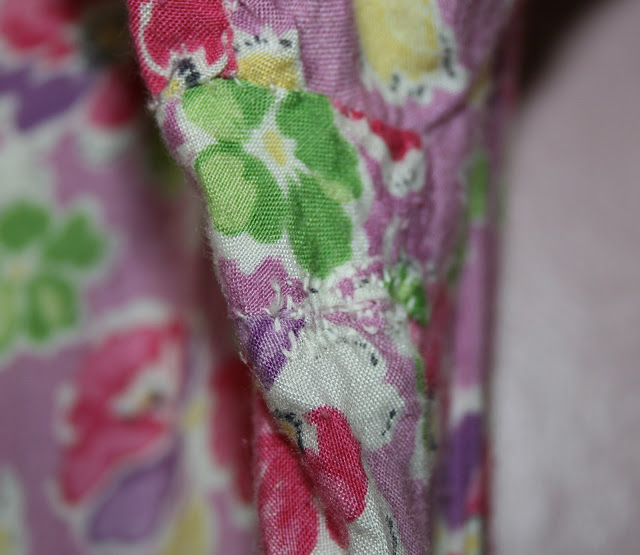 Ordinarily, we wouldn’t have considered the dress because, in its purchased state, it was un-wearable; even for the hardiest of 1940's re-enactors.

However, the dress found its saviour in the form of a rather generous, and definitely passion killing, pair of bloomers!  Just take a look at the voluminous behind on these drawers.  No chance of coping an eyeful of something you weren’t meant to with these little babies on your behind! 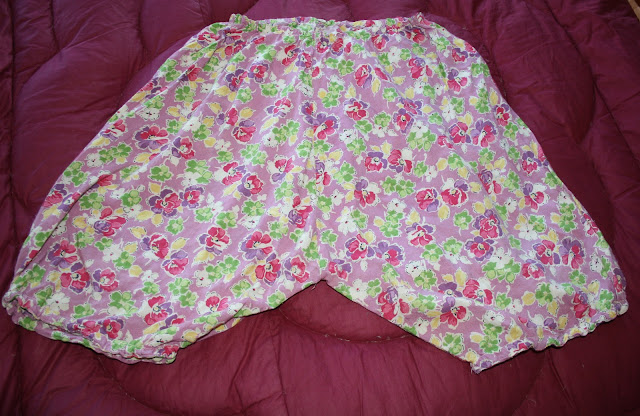 With pursed lips and a deep breath, I carefully unpicked the sleeves.  The seams had been overstitched by hand to prevent fraying, the seam allowance was on the small side and the stitching was tiny which made the process of unpicking them rather time consuming.

Once the sleeves were off and the dainty white trim removed, I made a paper pattern from the damaged sleeve. 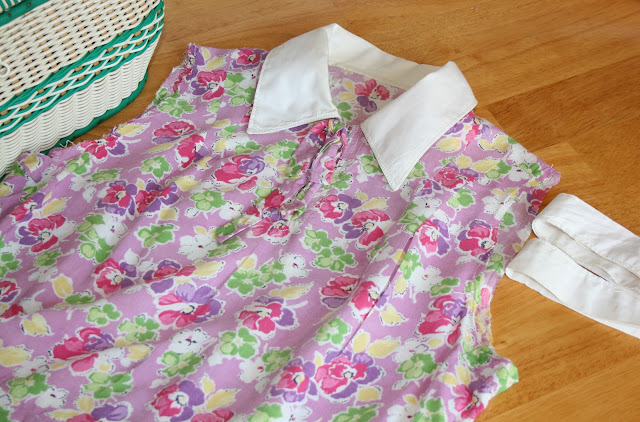 The seams on the bloomers had been stitched, folded over, and stitched again which made unpicking them impossible so I cut off the seams.  When originally made, the pattern had been cut on the cross, to give a degree of stretch to accommodate ones derrière, which meant there wasn't as much fabric in them as I thought there would be, but I managed to find enough fabric on the straight grain to get 2 new sleeves cut. 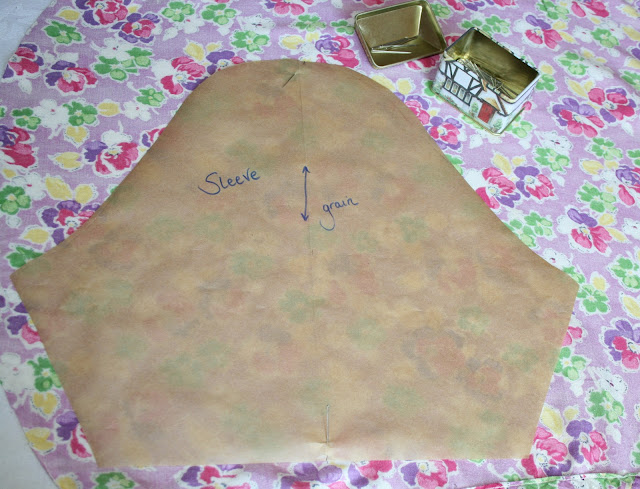 The underarm damage had been patch repaired a long time ago.  In other vintage dresses I have, there are underarm gussets and so, with that in mind, I cut away the damaged fabric from the underarm on the right hand side and made a paper pattern from the pieces which I then flipped over to make corresponding replacements for the other side.

With such a busy floral print, the new pieces are virtually lost in the design and you have to look quite hard to see the repair. 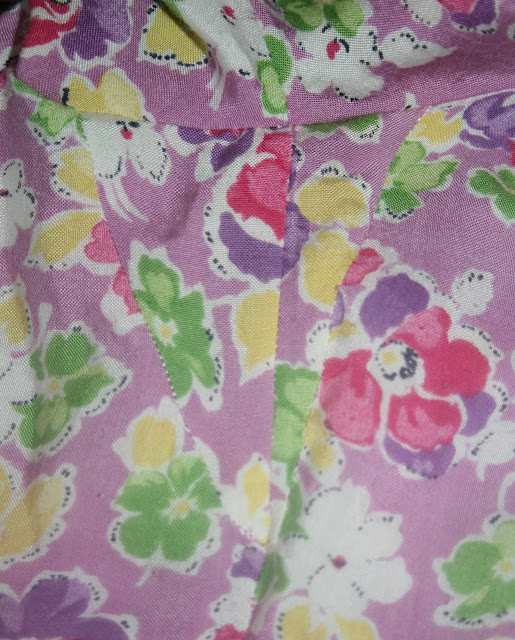 Originally, the dress had a belt, as most dresses of the day did.  I didn't have a long enough piece of fabric to make a belt from one piece so instead joined together 4 pieces, 12" long, and fashioned them into a back tie belt.  With the addition of a white 1930’s buckle for decorative detail only, I think the dress has turned out really well.  Granted, it's not as good as new, but something that might have ended up on the scrap heap has now been given a new lease of life and is ready to find a new home. 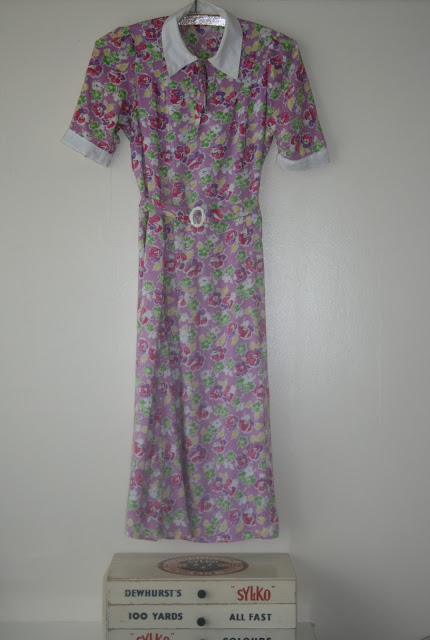 But it doesn’t stop there :o)

Inspired by the colours of the dress, I decided to make a matching corsage.  I actually made the corsage before I butchered the dress, I simply couldn't wait!! :o)

I love the colours in the dress.  There is something so wonderfully fresh and spring like about them and the green was so vivid and bright.  I matched my felt colours as closely as possible, although I couldn't match the yellow (I still haven't found a decent, non acidic, yellow shade) and so went for cream instead. 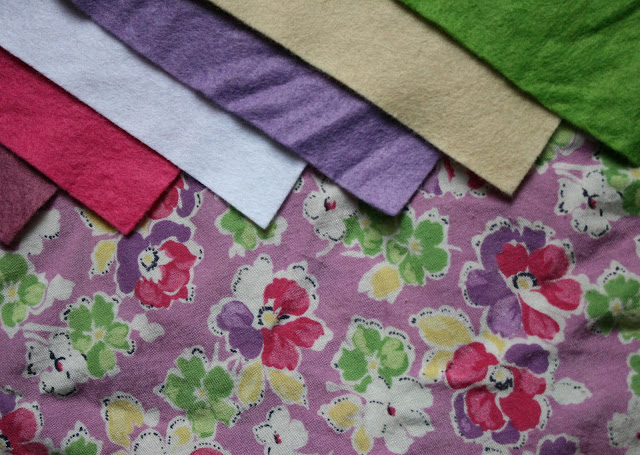 I used a new to me corsage pattern from 1941.  It's fiddly to cut out, but the finished design is really pretty so all the snipping is worth it!  I'm now chomping at the bit to make some more!! :o) 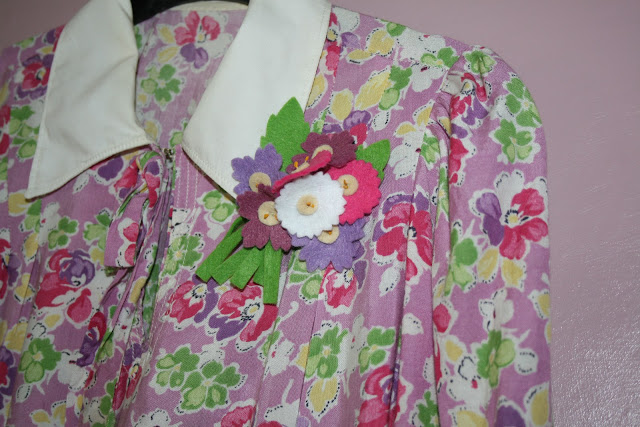 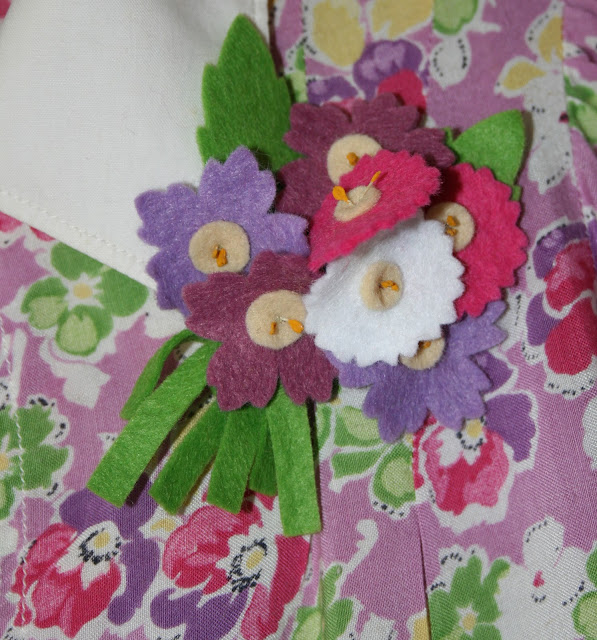 Well,what a beautiful bank holiday we had.  The sun shone here in my little bit of Suffolk for the entire three days and not a bit of rain fell; something which is virtually unheard of on a British bank holiday.

I've been snuffling along this past week with a rather knock out bought of lurgy that Mr Y kindly brought home with him from school.  Snuffles and sneezes are an occupational hazard in his job :o)  To tick me off even further, I've woken up this morning with a cricked neck which is making even the simplest of tasks painful.

I therefore have very few words for you today (you might consider that to be a good thing!) but I couldn't let the glorious bank holiday slip past without a mention.  We certainly made the most of it!  It involved some gardening, a BBQ, the historic car run, a trip to the ice cream parlour, DIY (it was a bank holiday after all!), sewing, knitting, crafting, baking and birthday celebrations. (The pictures have loaded in a random order - sorry).