That Will Teach Me!!

Have you ever seen the film “Love Actually”?  It’s a feel good favourite of mine that I have probably watched more times than I care to remember.  Anyhow. If you have, bring to mind, if you will, the scene with Bill Nighy where he is in the recording studio attempting to do a festive rendition of “Love is all Around”.

Well, after failing again to cram the new lyrics into the song, he lets off steam with a rather expletive laden tirade.  If you do know the scene that I am writing of, then that was me when I naffed up the most recent car jumper that I was knitting (if you don't know the scene, then you can see the clip here, courtesy of Youtube).

I’m not actually knitting a jumper with cars on, no, my car jumper is my “on the move jumper”; the one that keeps my fingers busy when we are out and about in the car.

The jumper that I made a right royal muck up of was one I started about 2 months ago.  The pattern used was a 1940’s Lavenda one that I have had on my “to knit” list for a very long time. 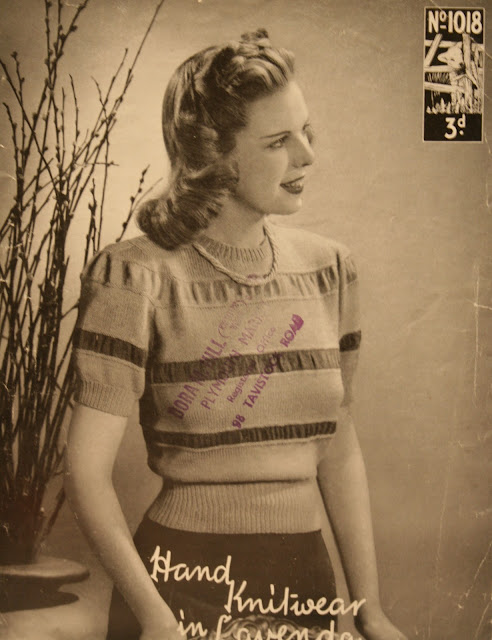 Being stripy, I thought it would be the perfect woollie to use up some of my 4 ply stash on.  The pattern wanted 5oz of main and 3oz of contrast, which was fine.  I weighed the melon wool left over from a jumper completed 2 summers ago and, with just over 5oz, I thought I had enough.  Struggling to find 3 contrasting shades, as the pattern suggested, I ended up opting for just the one in a neutral shade of silver grey.

I got off to a good start.  The sleeves knitted up quite quickly and the colours looked really nice together, if a little ‘30s rather than ‘40s.  I moved onto the front and, although it turned out bigger than the pattern suggested, despite my accurate following of the instructions, I wasn’t too concerned.

I moved onto the back and blithely carried on, not getting too concerned at the diminishing ball of melon and then; disaster!  When I got just above the second stripe of grey, I ran out of melon!

To say I was peeved would be an understatement.  Furious would be closer to the mark, with a few expletives thrown in to boot!  I can honestly say that I have never run out of wool on anything I’ve knitted.  I’m usually meticulously careful with my calculations and I check and double check everything.  Not this time.

Looking back over the pattern, I’d mucked up the calculations entirely because I had failed to notice that the original was knitted in 3 ply!  Such a school boy error but that’s exactly what I’d done.

So, what to do then?  I didn’t like to admit my failings and at first did what every rational knitter would do; shoved it in a bag and moved onto something else!!  I thought the old saying “out of sight out of mind” might be true; not this time.  With the knowledge of a more than half finished jumper niggling away at the back of my mind, I was determined that the many hours worth of work would not be wasted.

I thought about possible solutions to the problem including buying more melon, but matching the dye lot would have been impossible after such a passing of time.  I thought about ripping back the sleeves and then knitting them in just the grey, but that didn’t appeal to me either because one of the main reasons I loved the original pattern was the continuity of stripes going across the entire jumper.

No, the only possible solution to the problem would be to unpick the melon rib and then use the unpicked wool to finish the top of the jumper.  I could then use the grey, a wool I had plenty of, to re-knit the rib.  Labourious, certainly, but it was the only solution I could think of.

And so it began!  Have you ever tried to rip back a jumper from the bottom up?  All I can say is avoid it if you can!  It’s really tricky!  I thought that it would unravel nicely, like it does from the top, but the wool kept getting caught and, after an hour of pulling and unwinding and seemingly getting nowhere, drastic action was called for.

With a No. 12 needle, I picked up a row of knit stitches just about the rib and then, with a deep breath, I cut off the rib!

I really could see no other way to go about it.  Unravelling it from the bottom was leaving me stressed and the wool over stretched.  Working it this way round, I was able to take the knitting back to a neat finish and then, after doing a row of knit with the grey, was able to carry on with the K1, P1 rib.

I didn’t want to rip back the rib on the sleeves because that would have given an additional grey stripe which would have looked uneven.  Instead, I left the sleeves as they were, but opted to pick up around the neck using the grey wool in an attempt to pull the jumper together.  A couple of clear plastic buttons later, and the jumper was finished. 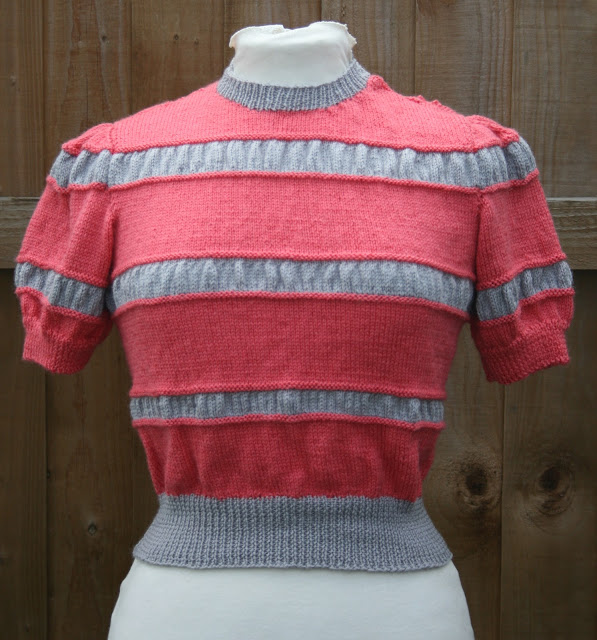 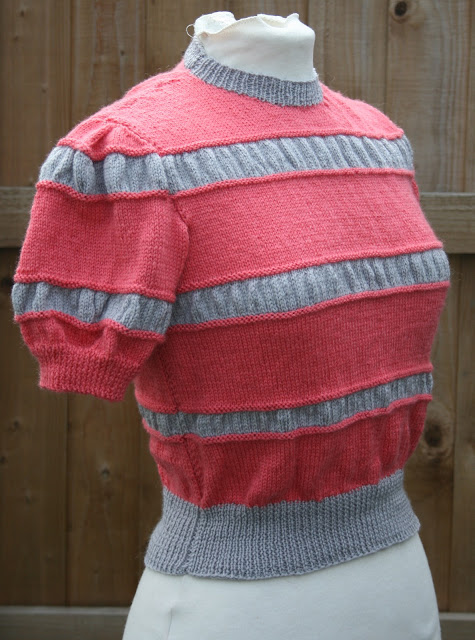 Obviously, the jumper didn’t end up looking exactly as the pattern suggested, but I’m not unhappy with it, although I don’t intend to have to go through the same faff again and will therefore be certain to get my calculations right next time!!