Warning!  This is yet another post dedicated almost entirely to those pretty little petals of felt that make me giddy just thinking about them! :o)

I have been desperate to write this post and have been willing my hands to snip and stitch faster and wishing that boring things like cleaning and ironing didn’t get in the way!!  You see, I have bought a rather wonderful new pattern booklet.  Just take a look! 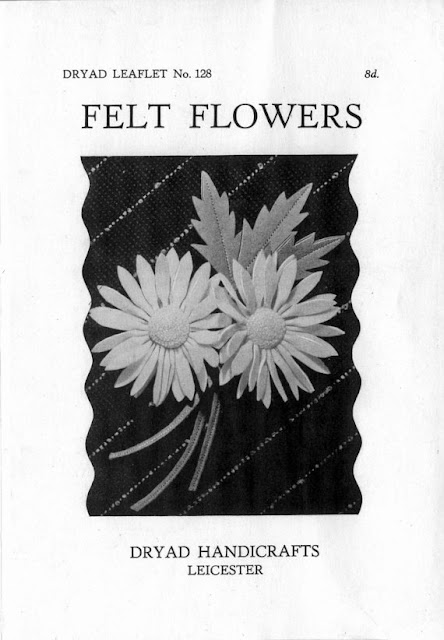 Doesn’t look much, right? But trust me when I say that it really, really, really is!!  This pattern, this coveted and much sought after pattern, was featured in one of my Needlework Illustrated magazines.  I had been trying to track it down for a long time but had never found it; until now!!!

At the Rufford 1940’s event, I was talking to a fellow trader, (the reader of my blog that I mentioned in my last post) and we were discussing felt flower patterns.  It turned out that her husband had an Etsy shop and for sale in said shop, along with an amazing collection of patterns, was the very Dryad leaflet!!  Small world, don’t you think??

Anyway, I bought the PDF pattern and as soon as it arrived, I set to work!  It’s a slow process though as the corsages are very time consuming and, let’s be realistic, home life doesn’t just stop because I have a new pattern!

There are 12 patterns in the booklet but they aren’t all to my taste so I started on those that appealed the most.

First up, a neat little bunch of “gay golden marigolds”, all in autumnal shades which, given the change in the weather, is rather fitting. 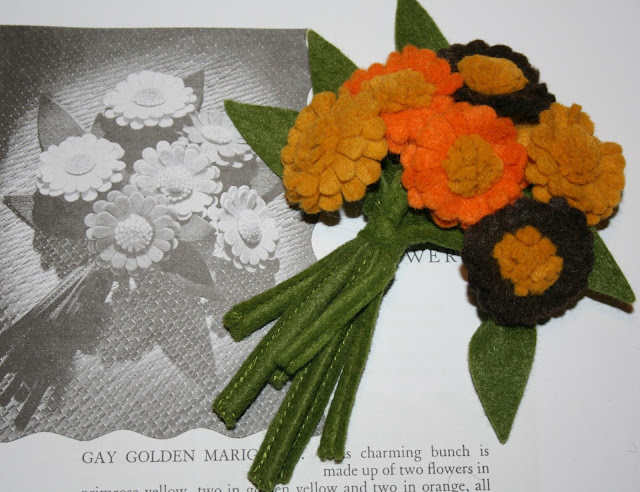 Next we have a rather large pair of chrysanthemums.  The original pattern called for all white flowers and middles, but the white felt wasn’t holding its shape very well so I used some original 1940’s felt instead.  This one is destined to adorn my winter coat! 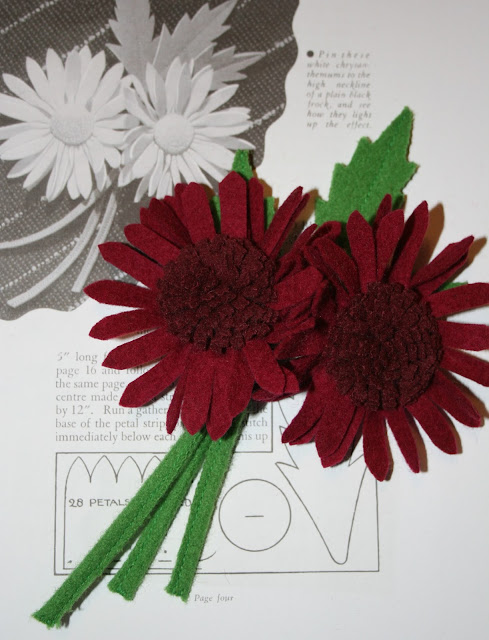 A favourite of mine is the rather spring like bunch of little daisies.  These were tricky little blighters to do as there are 10 in the bunch and it was hard to show each one off.  It was also hard to find 5 colours that went well together and I certainly wasn’t convinced by the original suggestion of scarlet, golden yellow, primrose, royal blue and white! 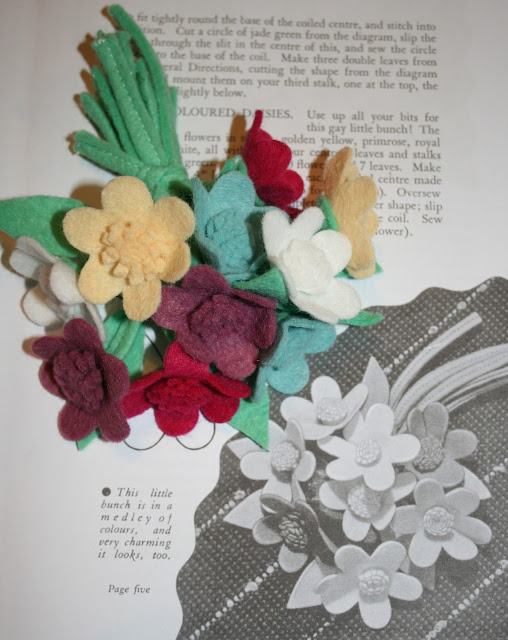 The poppies are, quite simply, divine.  They were a joy to make and have already proved popular. 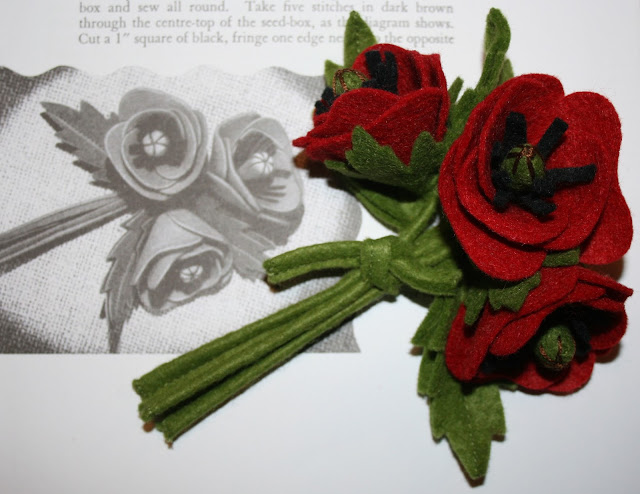 Next, some more red flowers, this time in the form of some larger daisies.  I stuck to the pattern this time and used the colours they suggested. 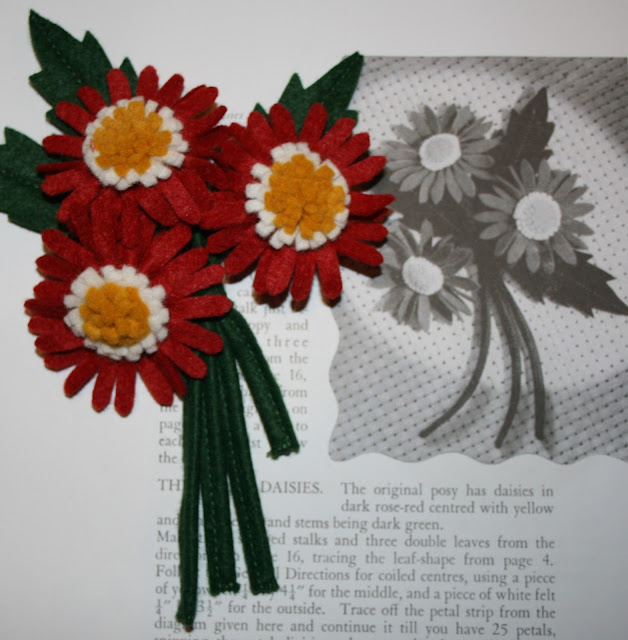 The penultimate bunch is a rather neat little trio of rosebuds. 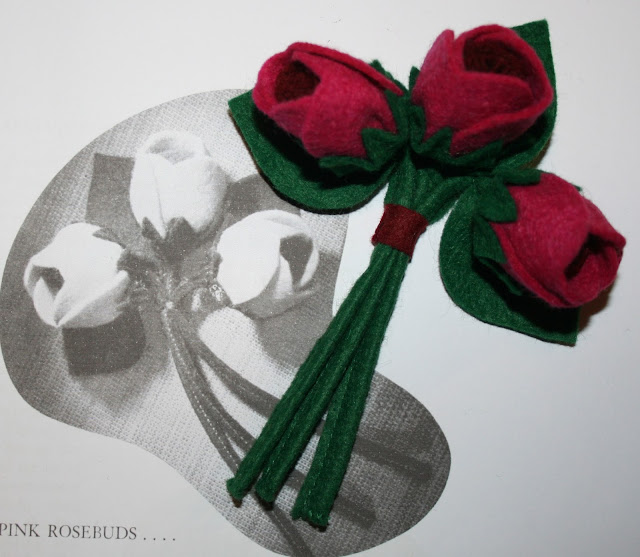 And finally, my absolute favourite, if somewhat large, the amazing bunch of anemones! 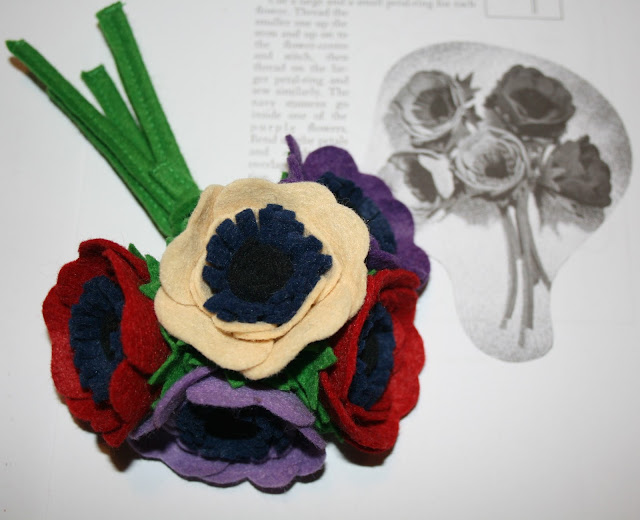 And if you haven’t had enough already, here is one last snap, all 7 pretty posies clustered together! 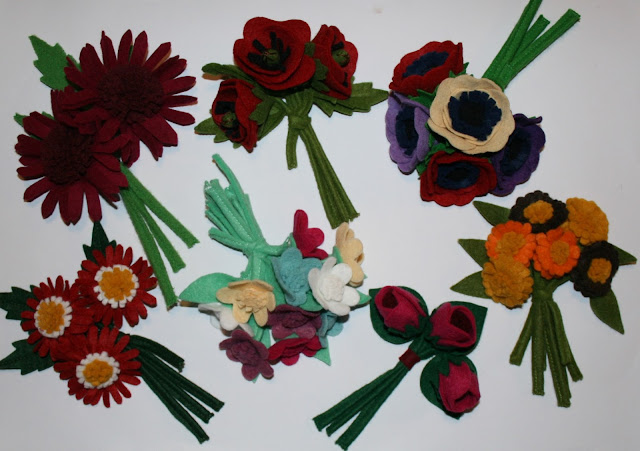 Aren’t they pretty?!  Unlike so many of the corsage patterns from the 1940’s, the instructions in the Dryad leaflet are actually clear, and the pattern pieces neatly worked out and easy, if rather time consuming, to assemble.

If any of you crafting lovelies want to give these felt fancies a go, you will find the leaflet here, on LittleJohn2003's Etsy shop.  The service they provide is A1!!  The pattern has been digitally enhanced and is as clean and crisp as the day it was made.  Great time and effort has been put in by the seller to ensure that the pattern is in tip top condition and I received my pattern within an hour of placing the order (if you are overseas, please allow additional time due to time zone differences).

If you don’t craft, but would still like to own such a pretty piece, then please head over to my Etsy shop, here, where you can place an order :o)
Posted by Lucy at 00:51 22 comments:

So we are in September already!  Isn’t this year rolling along quickly?  Although the days here in are still decidedly sweltering, the mornings are fresh and there is a definite nip in the beautifully clean air, signalling that autumn is just around the corner.

We were away this weekend and certainly felt the dip in temperature.  No longer able to sleep under canvas with just a single layer, the girls were bundled and snuggled, while my Mr and I lay awake discussing how we should have taken more bedding with us!

Where did we go?  Well, the unimaginative title of this post already gives the game away as to where we have been; the delightful and beautiful Rufford Abbey.  And the reason for our visit; their annual Rufford at War weekend!! 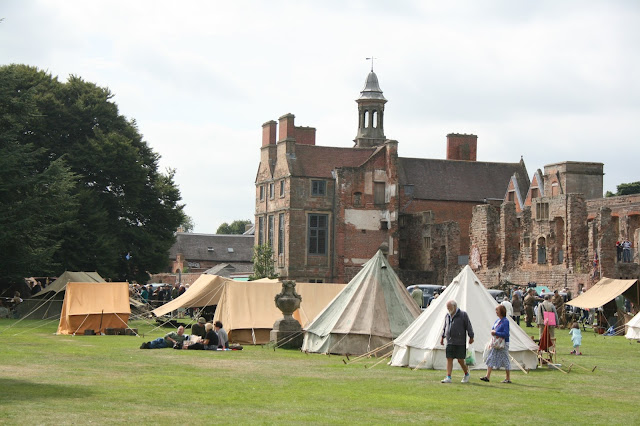 The event is in its 7th year, but this was the first time we have attended.  Being 160 miles away from home, it’s somewhat further than we normally consider travelling with our vintage wares but, with Wimpole at War clashing with Sheringham’s 1940’s event (which I’m highly peeved about, I must tell you!!!) we thought we’d better pick up another event, so Rufford it was.

Rufford Abbey is an amazing place.  Although no longer as grand as it once was, the Grade 1 listed Ancient Monument is incredibly beautiful and more than a little eerie when wandering around it’s vast grounds at dusk, when your husband, knowing what a coward you are, finds it hysterically funny to liken the structure to Count Draculas home!!!

The event was brilliantly organised and had a good dose of proper re-enactment.  By that, I mean that the re-enactors who had given their time to attend the event really got involved and engaged with the public.  Railway events and the like are brilliant for promenading in one’s finery, and I really mean that, but from a historical perspective, it’s nice to see true re-enactors giving a good portrayal of what life was really like during the dark days of WW2. 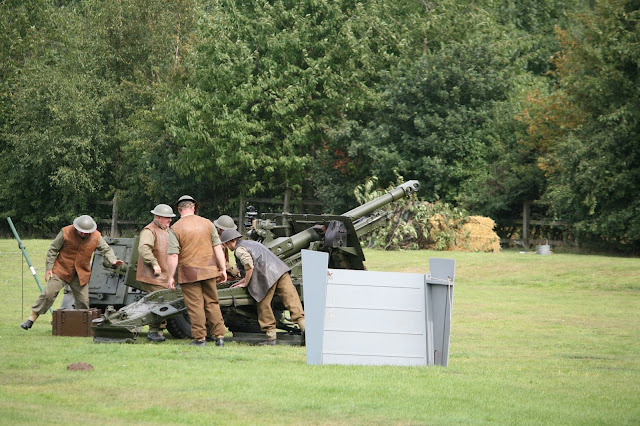 My dad is part of the Civil Defenders re-enactment group, and once kitted out from top to toe in his battledress and webbing, becomes Norman, a member of the 10th Battalion Suffolk Home Guard.

He, like me, is not a great fan of the camera and distance shots are about the best we get!! 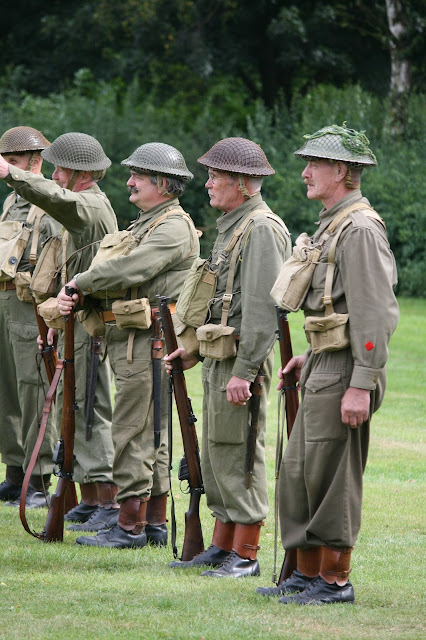 The girls had a wonderful time and even took park in a swing dance competition where they danced their little hearts out to 7 songs to become the swing dance winners of the day!  Their prize, rather aptly considering the Abbey had turned back the clock to WW2, was a banana, presented to them by The Spitfires, a great trio of female vocalists. 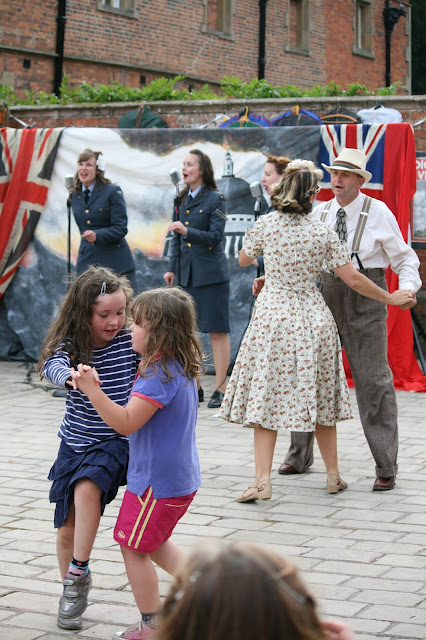 ﻿ ﻿
For me, the best bit of the weekend was meeting a lovely lady who actually reads this little old blog of mine!  I know people read my wafflings, because the stats tell me so, but to actually meet a real person; I was absolutely made up, if a little embarrassed!

The lady was a stall holder and had an enviable collection of knitting patterns, 10 of which came home with me, plus 2 more Needlework Illustrated magazines!  The collection is growing, slowly but surely :o)

Also on her stall were these beautiful brooches!  Aren’t they pretty? 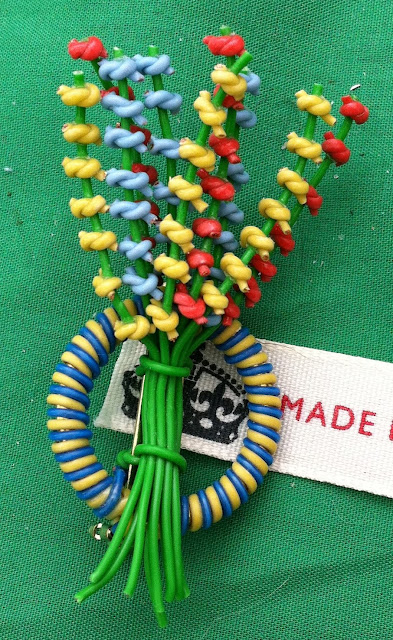 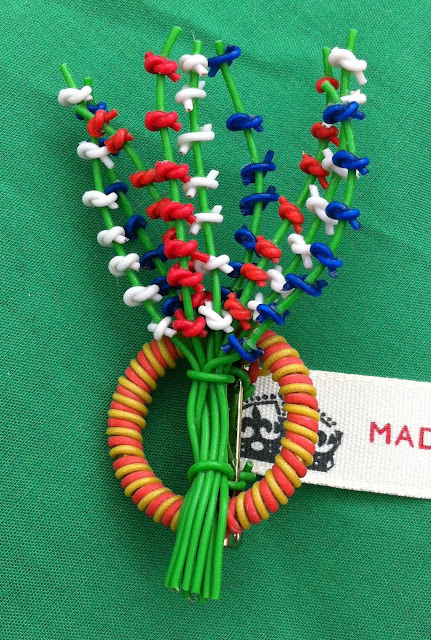 Based on original designs of the brooches I collect, they are absolutely beautiful!  They are so neatly finished and I believe you would be hard pushed to know they weren’t originals, unless you turned them over to look at the fastening.  If you have fancied owning such a piece, but have struggled to find an original one at a reasonable price, then they may be right up your street, so to speak :o)  I’m not sure if they are available online, but you can contact the maker through the following email address; em_vintageretro@hotmail.com

To the lovely lady and her family, this is a special “hello” to you.  I hope you like how the brooches photographed! xx

In other news, Mr Y has gone back to school now, 6 wonderful weeks over.  We are slowly getting back into the swing of things such as the 5.50am alarm and 11.45pm bed time; no wonder I look tired all the time!  But, as the saying goes, every cloud has a silver lining, and in this case, being awake for so many hours means lots of crafting time and, thanks to an incredible gift from a fellow blogger, you know who you are I hope, I have some wonderful patterns to work from, the results of which I hope to share to you soon!!