A couple of weeks ago, on what seemed like the first sunny weekend since last year, we popped out of , and into the neighbouring , for a weekend by the sea.

The weather was glorious, one of those perfect spring days that I remember from my childhood.  As we walked the coast path at Weybourne, the sky was a brilliant shade of blue, the sun was warm upon our backs, the skylarks were singing above our heads and the air was delightfully fresh and crisp.  The walk certainly blew away some lingering cobwebs.

I adore , I could happily pack my bags and move there tomorrow, if circumstances allowed.  There is something about the pace of life and friendliness of the locals that seems so welcoming.

Whenever we visit this neck of the woods, we endeavour to take a trip on the North Norfolk Railway.  My Mr is a lifelong railway fan and would live on the railway, given the chance!  If truth be told, I’m rather fond of a steam engine myself, and nothing beats travelling behind the engine, in a vintage railway carriage.

The NNR is our favourite heritage railway, and if you ever get the chance to visit, I’m certain you won’t be disappointed.  At the end of the line at Holt, tucked neatly against the tree line, with a perfect view down the track, is the most A-M-A-Z-I-N-G railway cottage ever!  I have seem some pretty quaint railway cottages in my time, but this one, without exaggeration, is the most incredible cottage I have ever had the pleasure of visiting.

You see, the cottage in question isn’t just any cottage, oh no, this beautiful home, one that I would happily set up home in, started out life as a railway carriage!

Once upon a time, railway carriages as homes wouldn't have been an uncommon sight.  When soldiers returned home from WW1, the promised jobs and homes simply weren’t there.  When they were demobbed, soldiers received any back pay that was due, and could apply for a grant to buy a small plot of unproductive farmland, onto which they put a decommissioned wooden Victorian railway carriage.

Railway Cottage was a home from the 1930’s right up until 2007, when the then owners donated it to the NNR.  Once on site at Holt, an extensive restoration project took place, and the tireless work of everyone involved has made Railway Cottage something truly amazing, well, to a vintage loving, social history obsessed nut like me it is! :o)

The cottage was officially opened to the public in April 2011, and although we have visited the railway on numerous occasions, I’d never actually managed to cross the threshold until that weekend.  I’m pleased to say that wasn’t disappointed.

The interior is beautiful.  It is as though you could just move in.  The larder is full, there are clothes hanging in the wardrobe, and what’s more, you are allowed to actually touch things.  The cottage is used as an educational resource for local schools to learn about what life would have been like during WW2.  I shan’t prattle on any more, but shall let you enjoy the pictures. 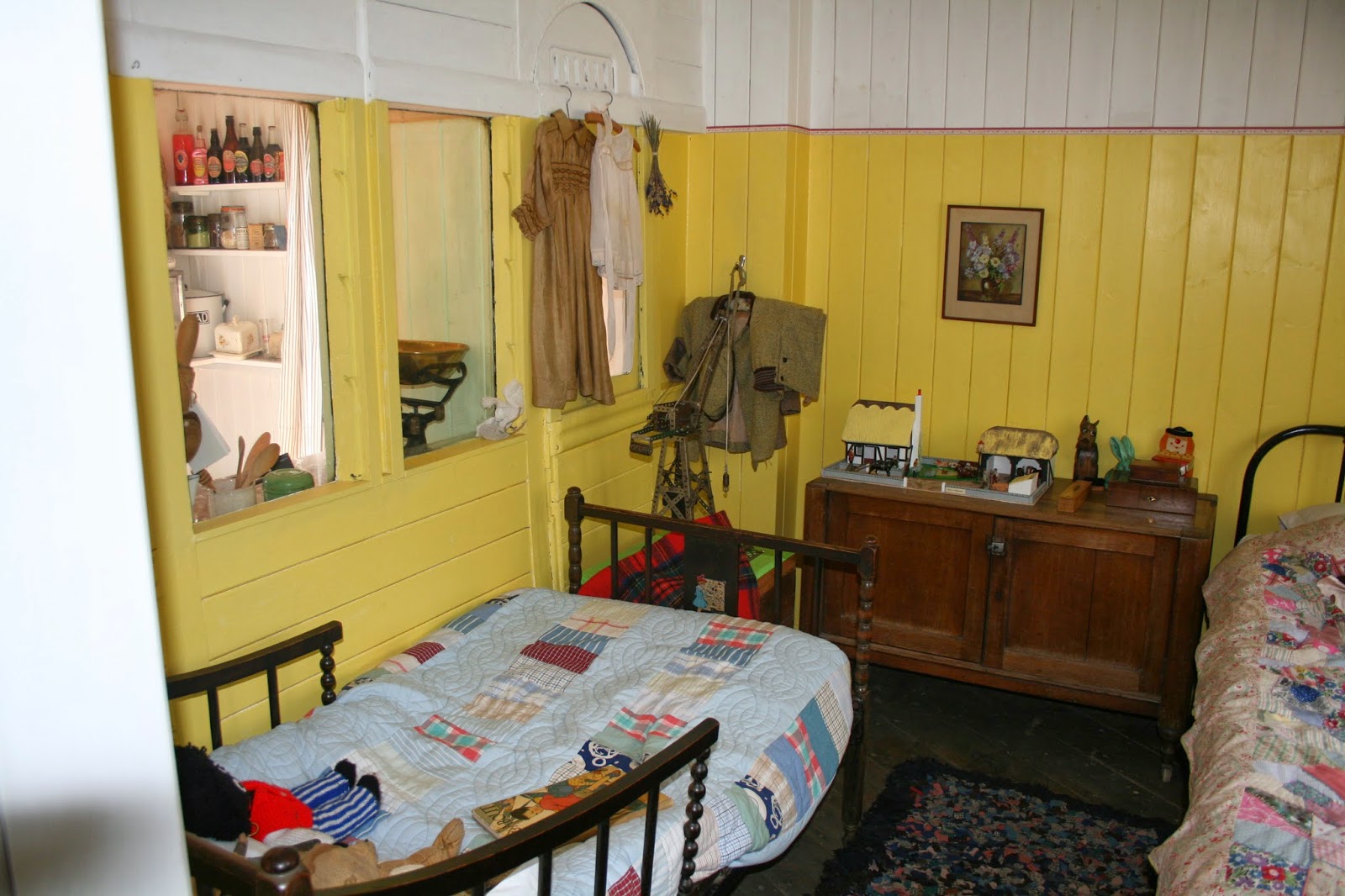 My Mr and I have a sort of unwritten rule.  If he goes to see a train (or 10!), I get to have a scout about for vintage goodies, and Norfolk never disappoints.  Holt has some beautiful antique and vintage clothing shops, and I’m always eager to see what we can find.  This visit proved fruitful, and finds included a coral linen 1940’s day dress, a novelty print cotton smock, knitting patterns and some knitting needles :o) 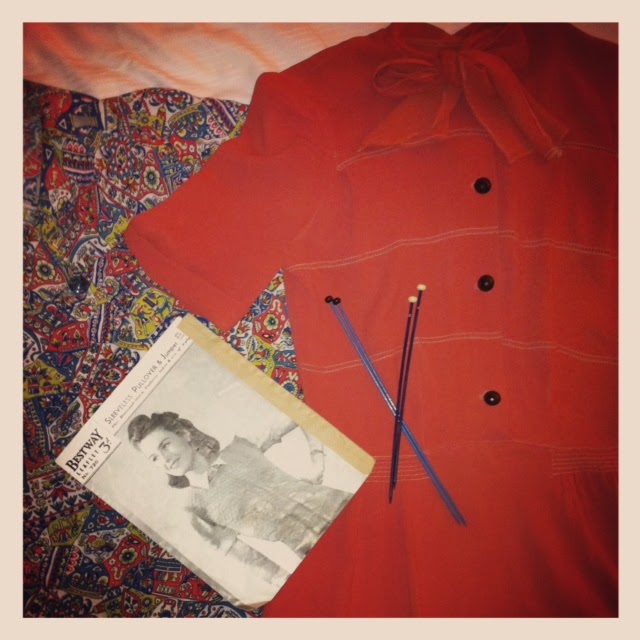 I'm sure it will come as no surprise to any of you that I like a spot of knitting.  If you follow me on Facebook or Instagram, I'm certain you know that I have a somewhat unquenchable love of vintage patterns, especially those from the 1930s and '40s.  The storage boxes under my bed, the drawers of my dresser and the drawers of my sideboard are all testament to my hoarding habit.  Take a book from the bookshelf, and a pattern is likely to flutter to the floor!

I haven't been particularly good at keeping an accurate record of the patterns I already have.  When we are out scouring for patterns, and the like, my Mr is always amazed that I can, just by looking at a front cover image, know, categorically, whether I have said pattern or not.
Although I adore most of the individual patterns from the 1940's, I always find myself specifically drawn to the Bestway patterns.  I don't know what it is about them, but I am always surprised at the varying designs and clever stitches, many of which I am yet to master!  The leaflets vary in size.  Those from the late 1930's and early years of WW2 are quite large, on thickish paper that doesn't bend easily.  As war progressed, and paper shortages became an issue, the size of the patterns was decreased and there was a significant decline in the quality of the paper.  Wartime patterns are far flimsier and tear more easily, yet survive in surprisingly large numbers.

As you would expect, I have some all time favourite patterns, all of which are on my "to knit" list :o) 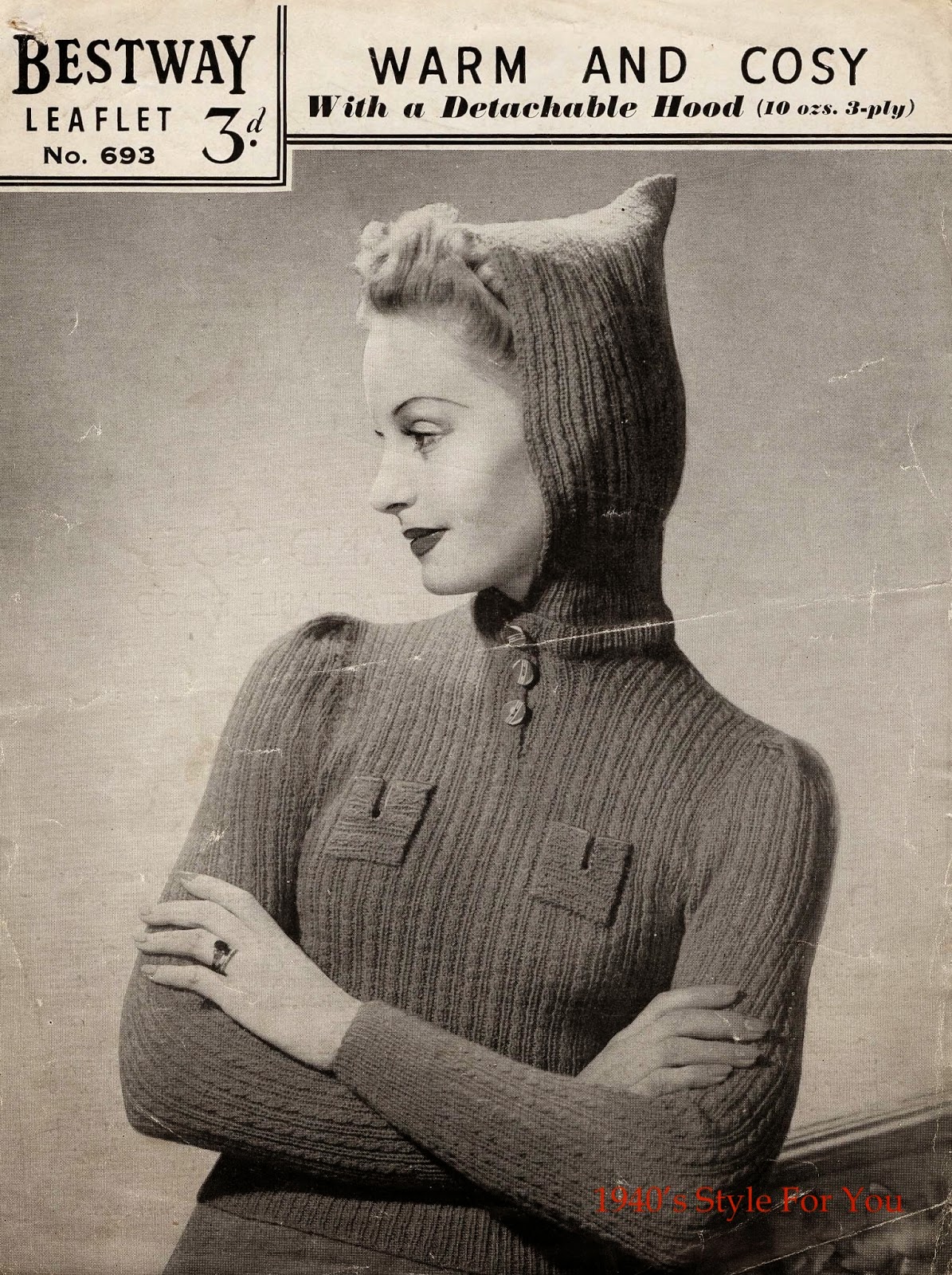 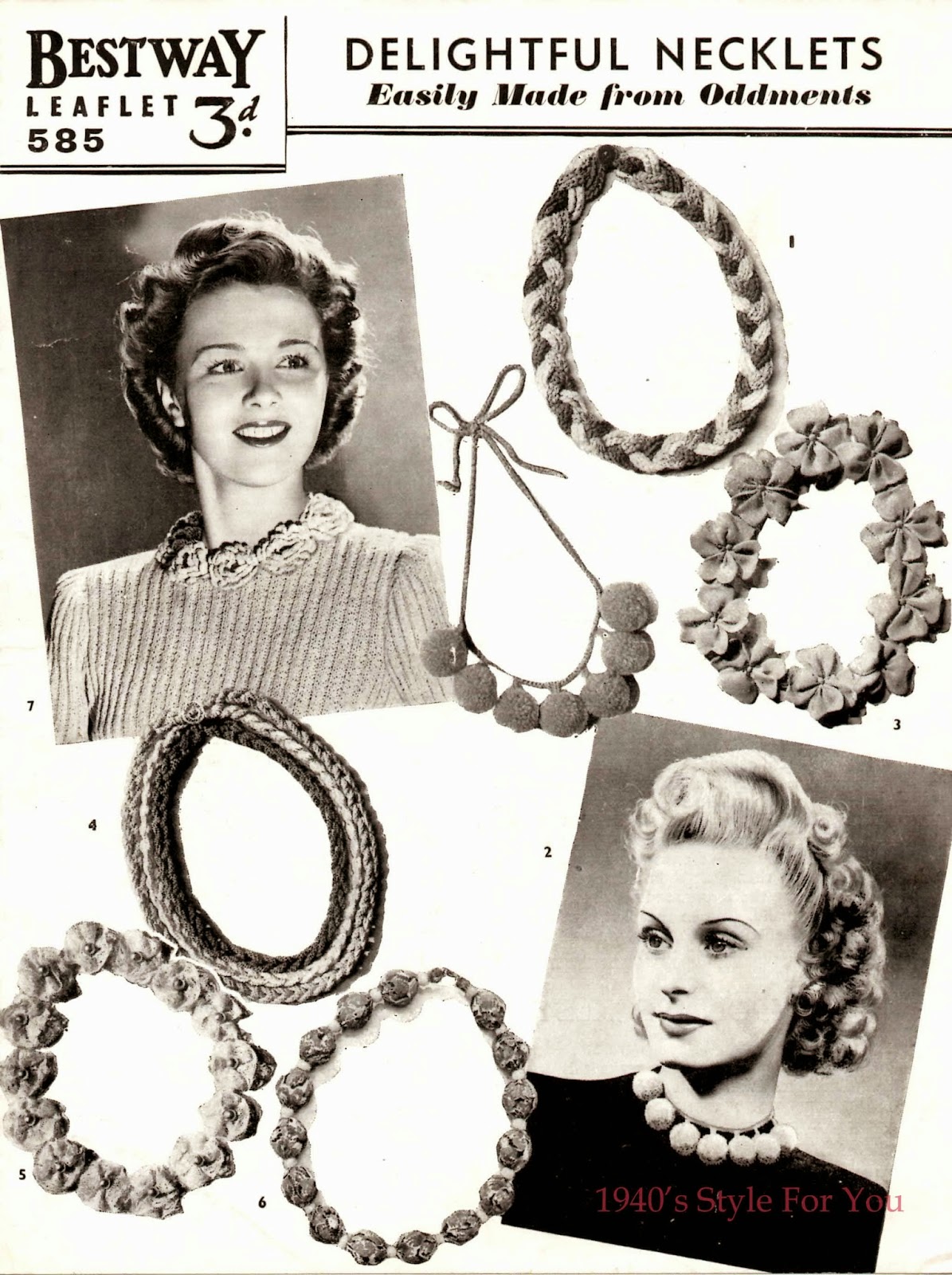 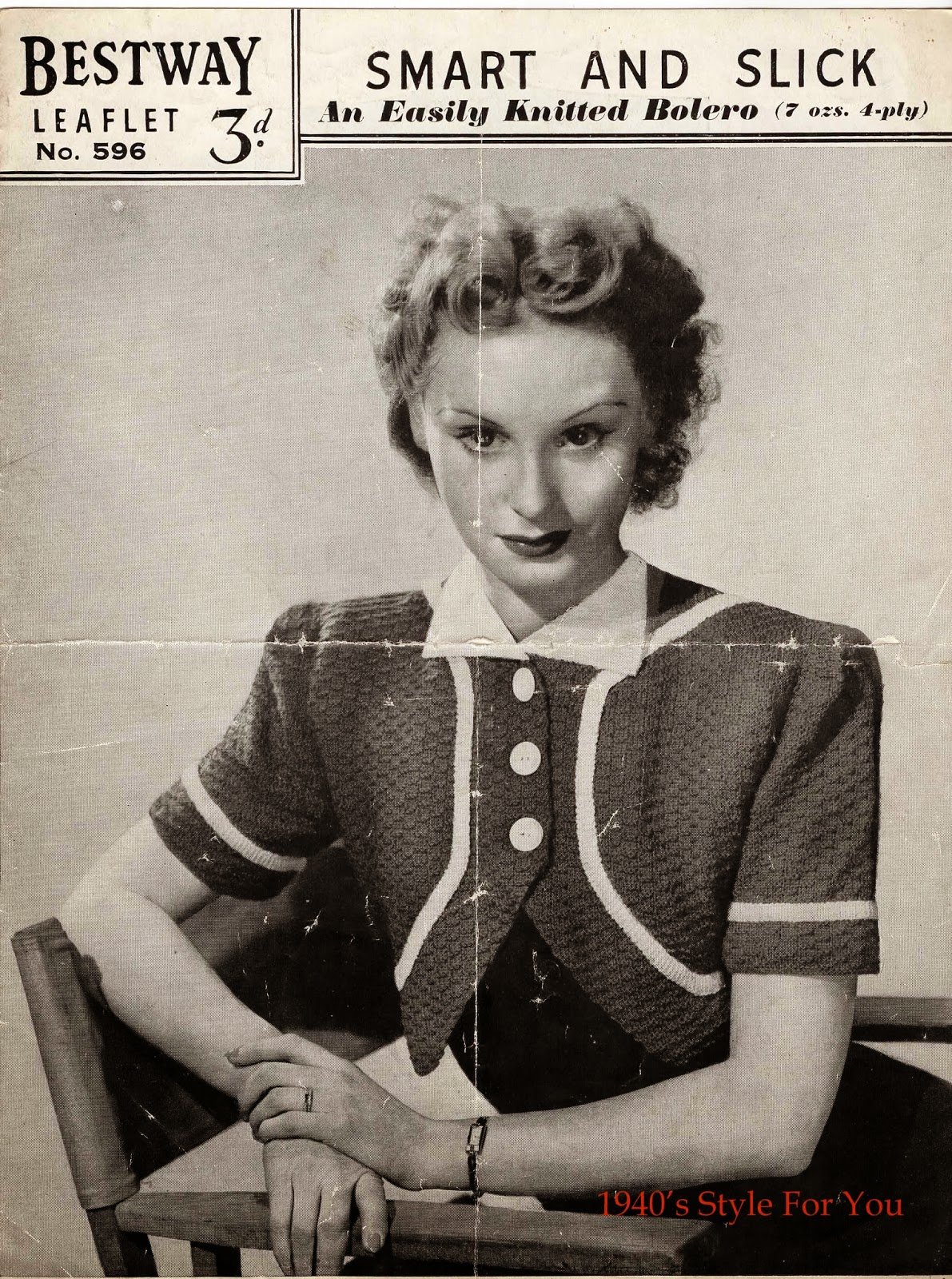 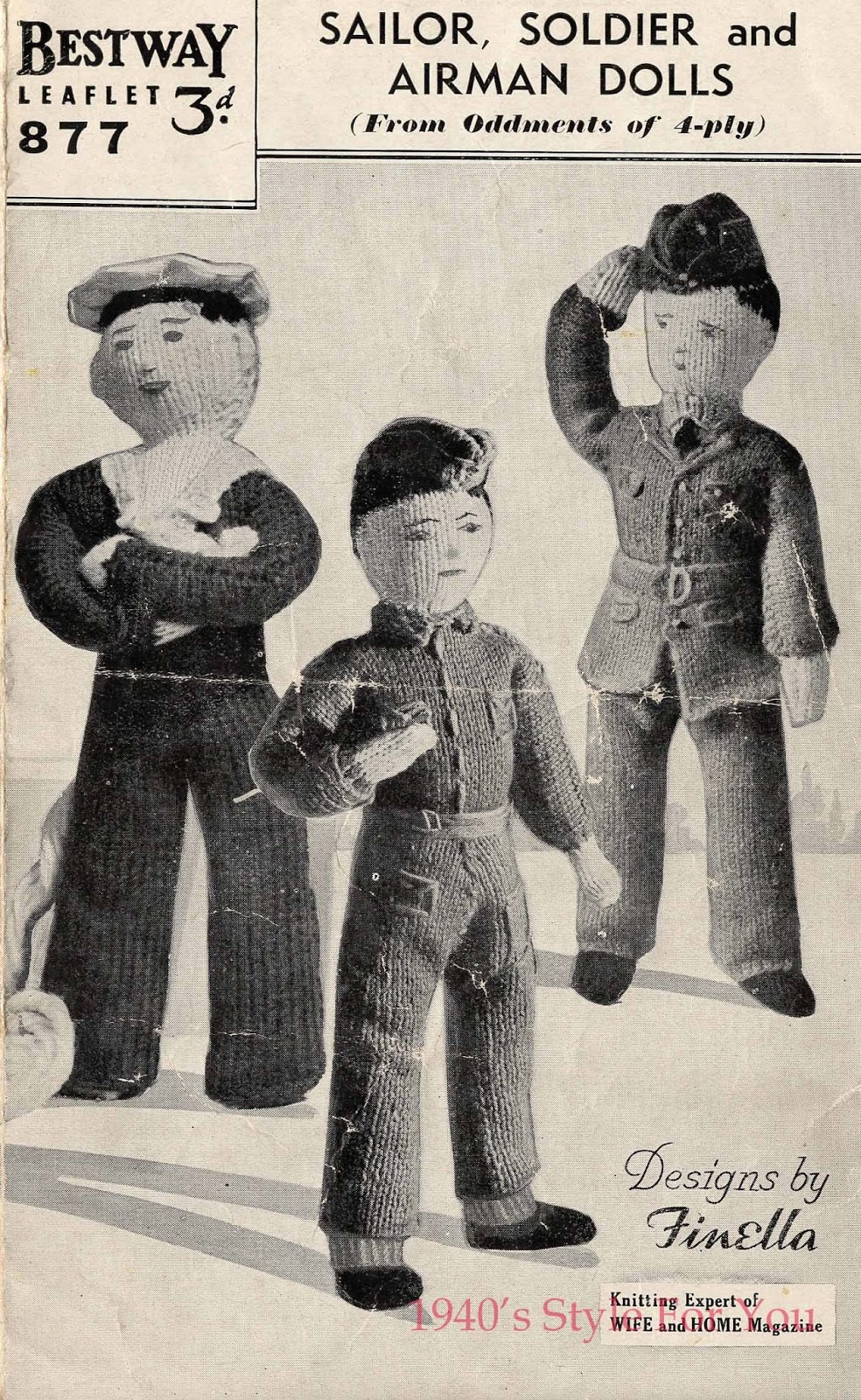 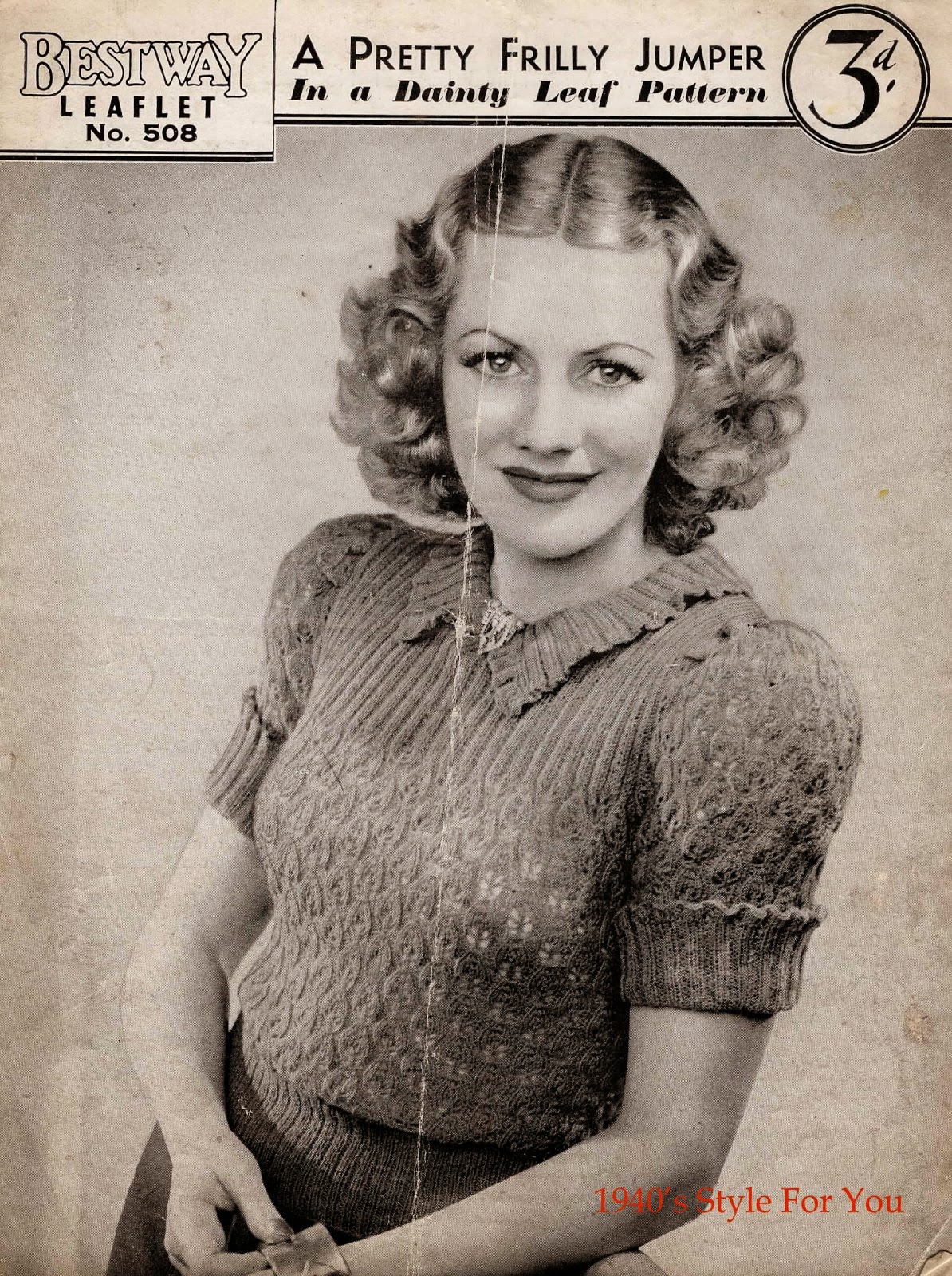 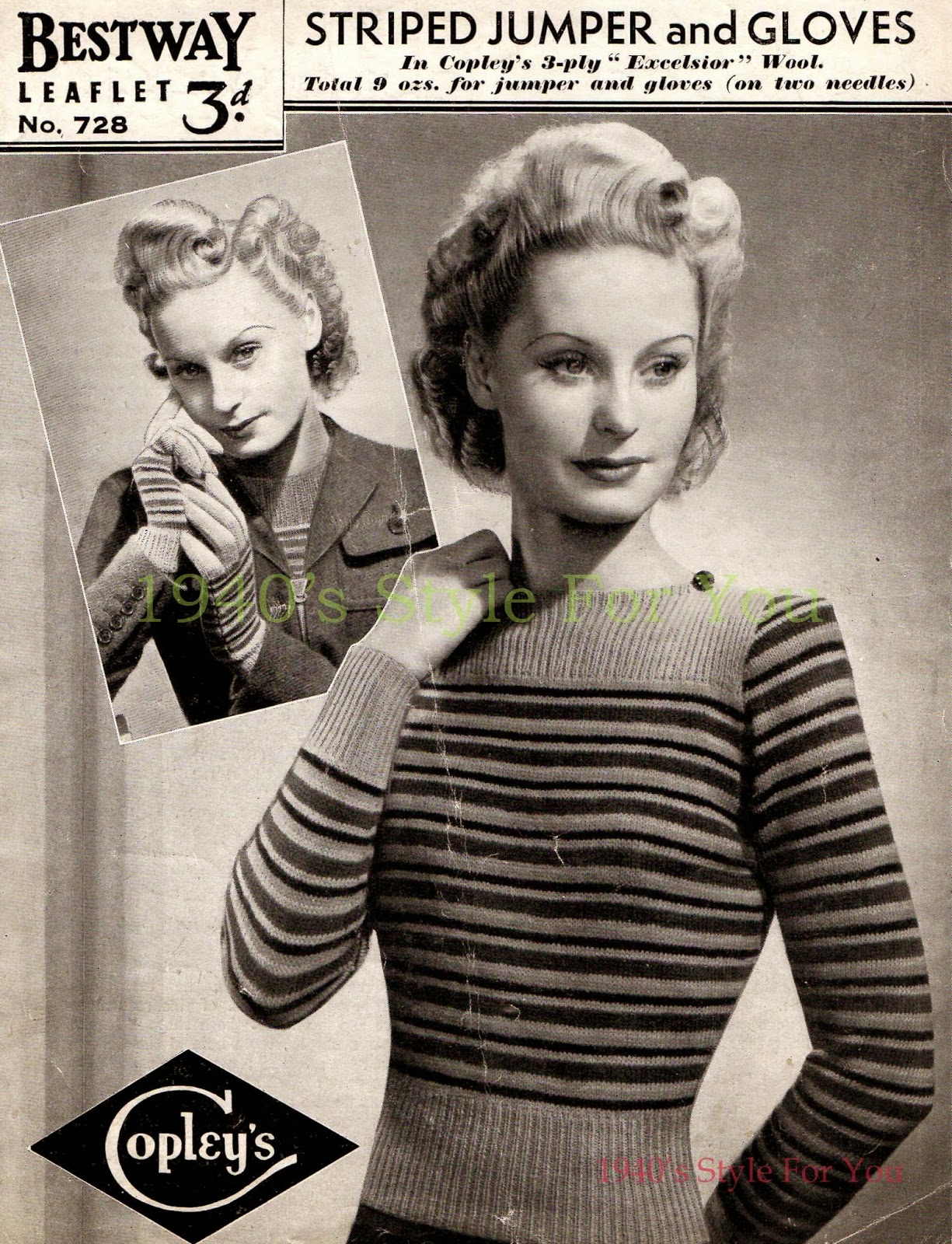 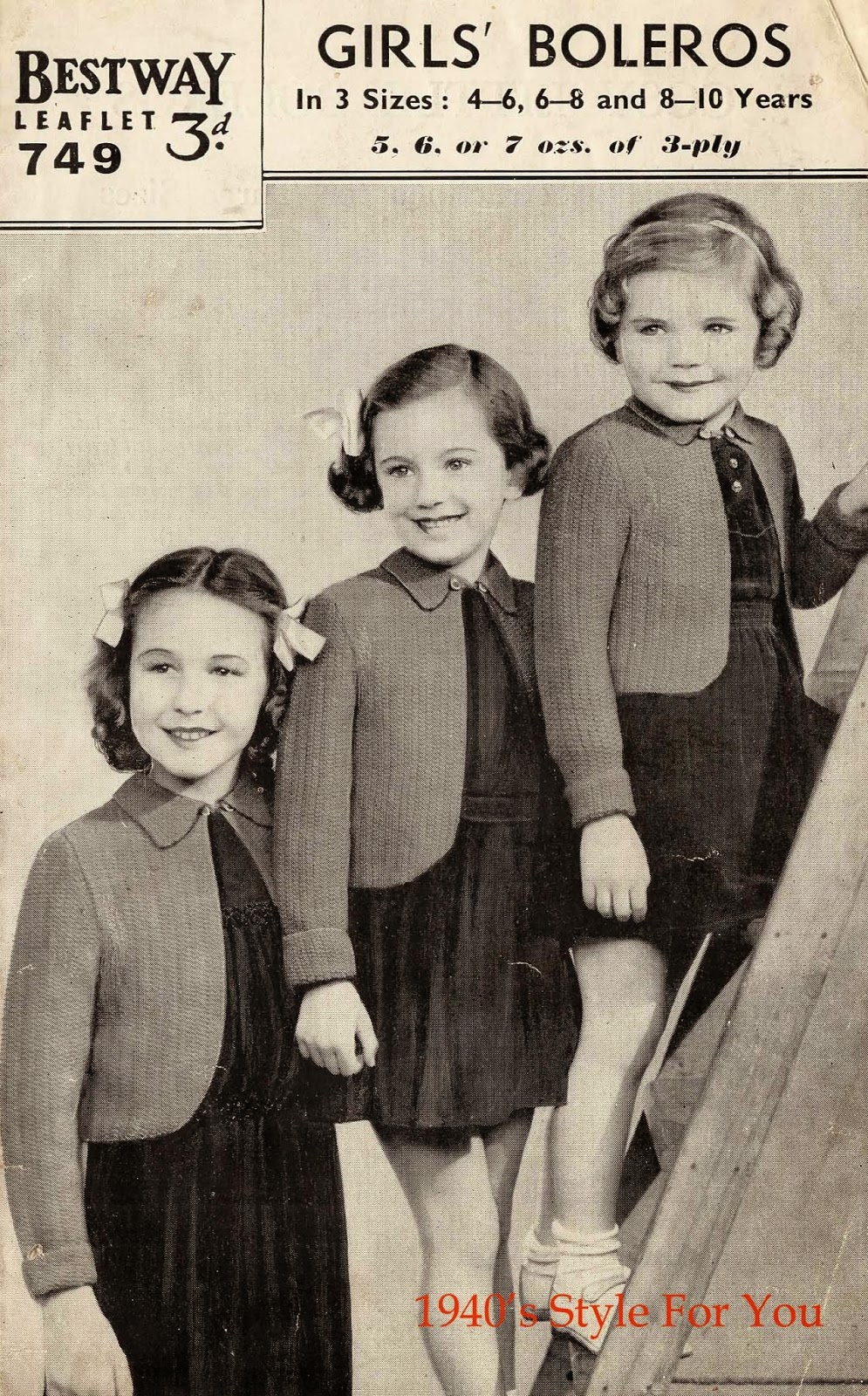 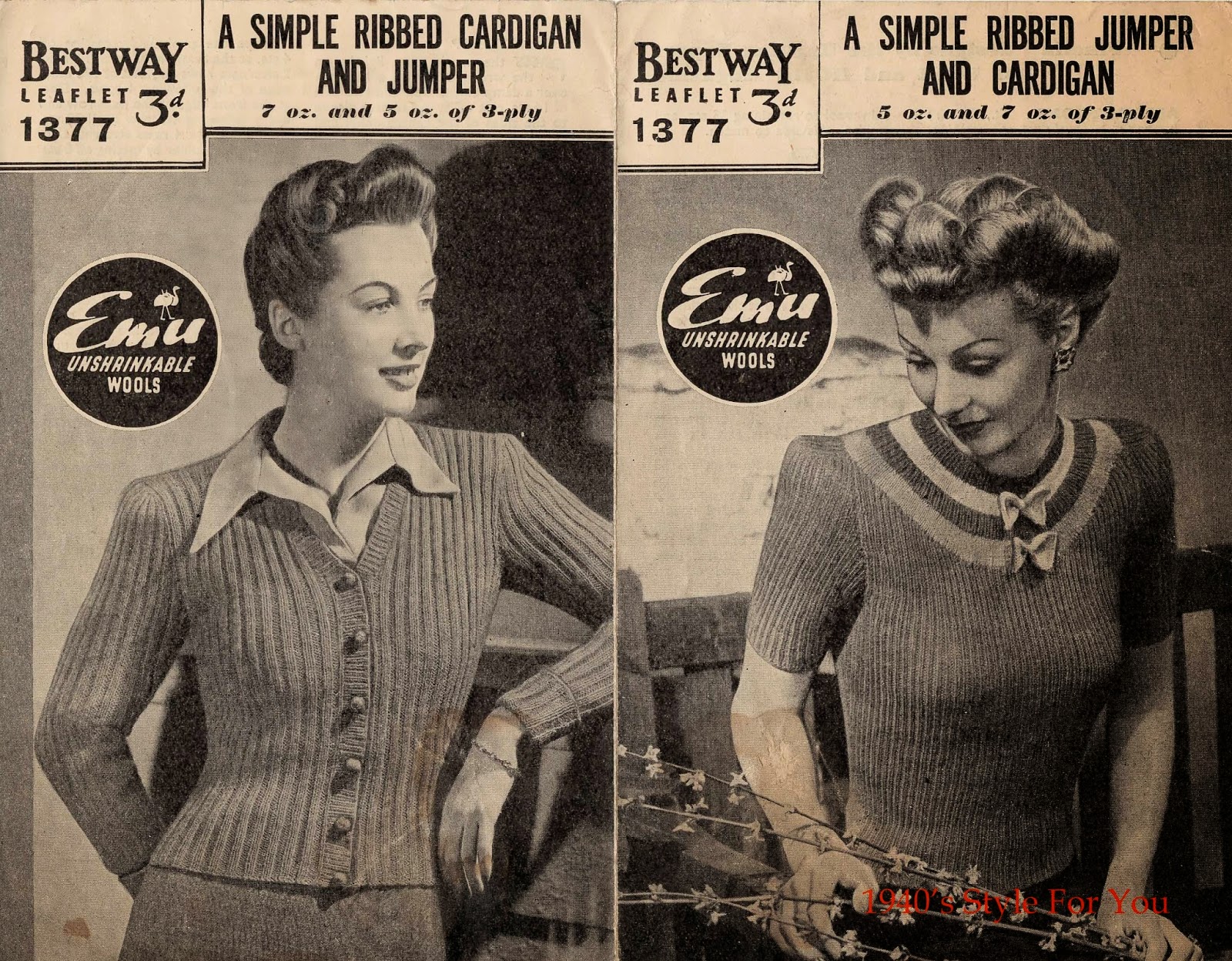 Frustratingly, I can't find a single thing out about the history of the Bestway Company.  I don't know when they first started producing patterns, or when they stopped!  I know they didn't exclusively deal with knitting patterns, as I have Bestway patterns for crochet, leather work, lacework and sewing, but sadly, that is as far as my knowledge goes.

Liza, who blogs over at The Vintage Knitter, has done a wonderful visual archive of the front covers from the 1940's Stitchcraft magazines, which you can find HERE.  As well as knitting, I love nothing more than to ogle at all the wonderful patterns that were produced in the 1940's, and so, inspired by Liza's efforts, I decided it was about time I got a grip of my own patterns.

Not wanting to feel overwhelmed, I started out slowly, tackling just 10 patterns a day and scanning them.  This scanning lark is boring, don't you know?! :o)  Anyhoo, I have managed to work my way through my Bestway stash and have, I think, put them into number order.

Some I know I'll never knit, nor do I ever wish to, but I collect and love them all the same.  I like the idea of a knitting pattern archive, and so have put my Bestway covers into a Flickr album that, should you fancy a butchers, you can find HERE.

Liza has kindly agreed to send me over pictures of the covers of some of her own Bestway patterns, and if you have any cover pictures that you would like to contribute, then please do get in touch.

Ultimately, the goal is to scan and digitally store all of my patterns.  I don't have any plans to get rid of my originals, but it is safer for them to be stored away, rather than mauled by me :o)

A Floral Frock for my Birthday Belle!

At the end of February, C turned 8.  I can’t quite believe that I have an 8 year old, how can time have raced by so quickly?!  It seems only yesterday that she was this tiny, toddling, cuddlesome bundle. 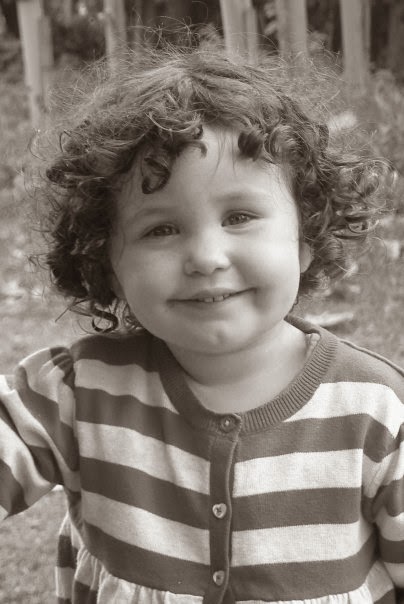 Anyway, my bundle of joy loves nothing more than to dance around in a pretty dress, the more voluminous the better!

I figure that every birthday girl deserves a new dress, right?  Having left it somewhat to the last minute, we wasted no time in choosing a pattern.  Options were given, but C was very definite in her choice, a sweet little pattern by ??

As much as I love to use vintage fabric, I don’t like to use it on anything I make for the girls who, lets face it, are growing taller by the day, so anything made will likely only last them one season.  Instead, a practical and easy to work with cotton was the order of the day, in perfect fresh spring tones.

Where one leads, the other often follows, and so not to be left out, M had to have a new dress too.

If you follow me on Instagram, you may recognise the fabric that she was lucky enough to end up with!  It’s a 1930’s reproduction fabric which I had bought with a view to turning it into a dress.  Right from the start, M had had other ideas, and as soon as it dropped on the doormat, she had claimed the fabric for a dress for herself.

To be fair, it’s a very practical fabric for a child’s dress.  Being cotton, it’s really easy to work with, is pretty durable, something required in a fabric for M who is always climbing, jumping, skipping and falling over!

Again, the pattern was a vintage one, but more simply constructed than C’s dress.  Not one for fancy collars or restrictive clothing, the sleeveless, open neckline design of the dress really suits M.

The fabric had no nap, which meant the pattern placing was easy.  The skirt construction was basically a run of 3 rectangles joined together and gathered.  The major plus point for M’s dress is that there is a 4” hem, so hopefully she will get use out of it well into next year. Teamed with thick tights and a cardigan, it’ll be perfect in winter too.

We still aren’t entirely sure how C managed it, but celebrations that would ordinarily have been confined to the one day ended up spreading over 3 days and she managed a meal out with my parents and brother, a day walking the coast at Dunwich with a buffet afterwards, and then a trip to the cinema with very special friends.  Think I might ask her for a few tips on extending my own birthday celebrations :o) 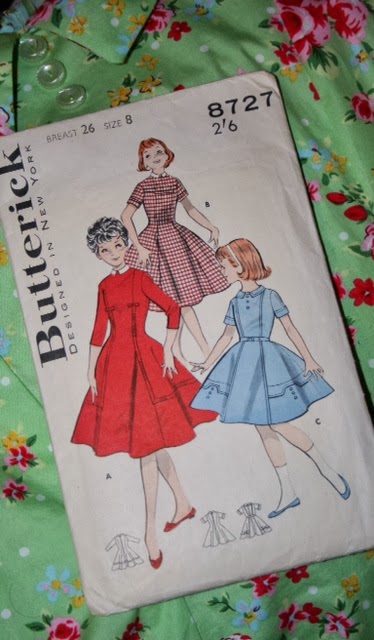 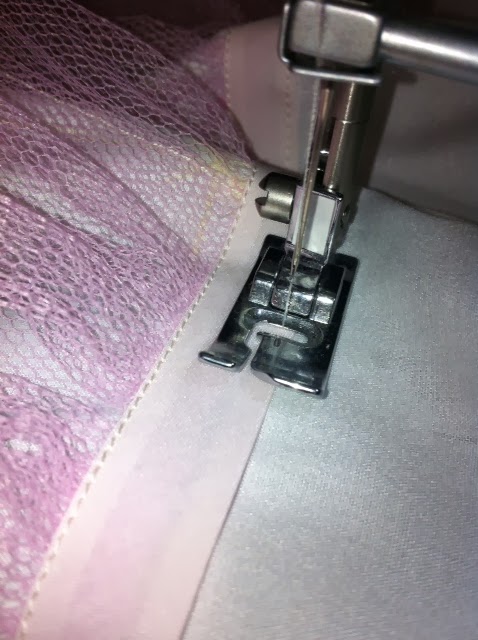 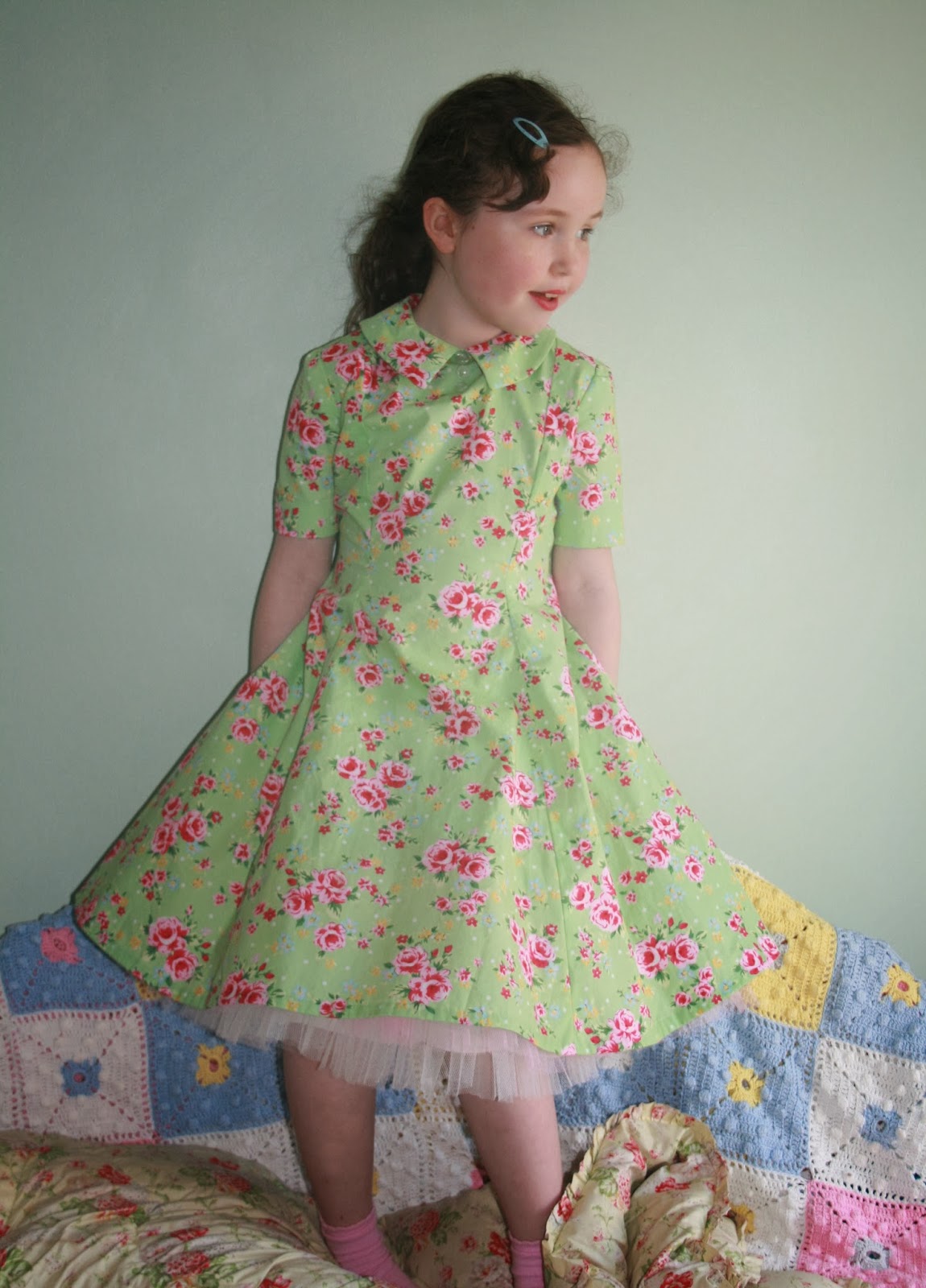 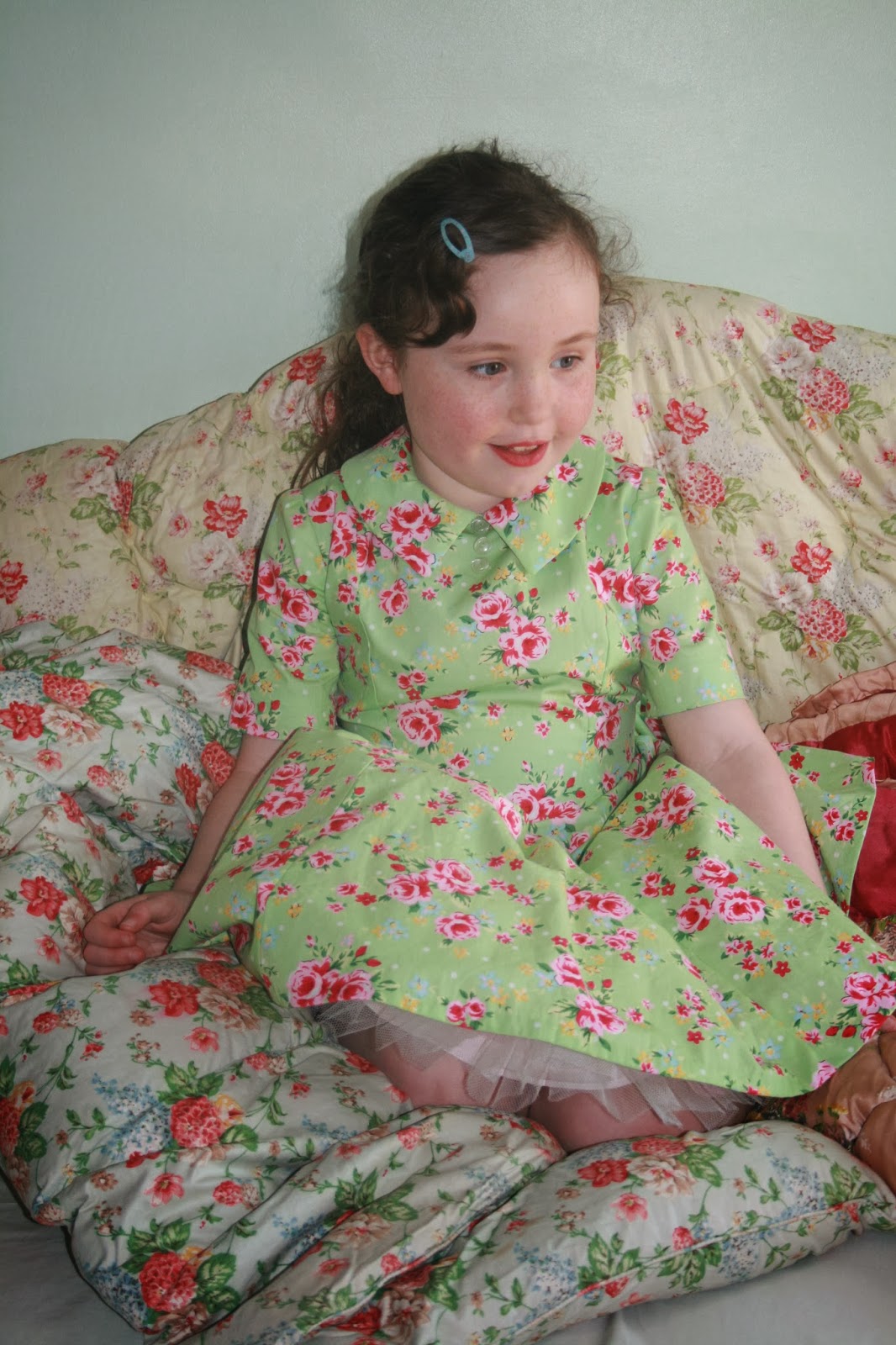 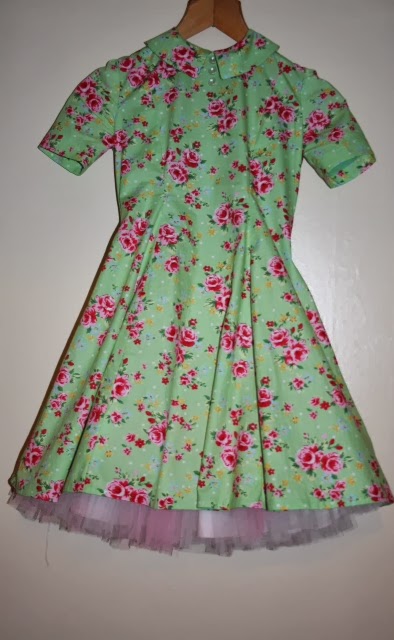 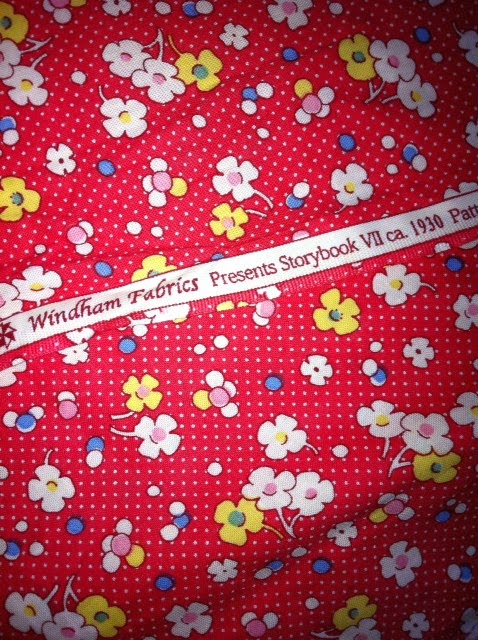 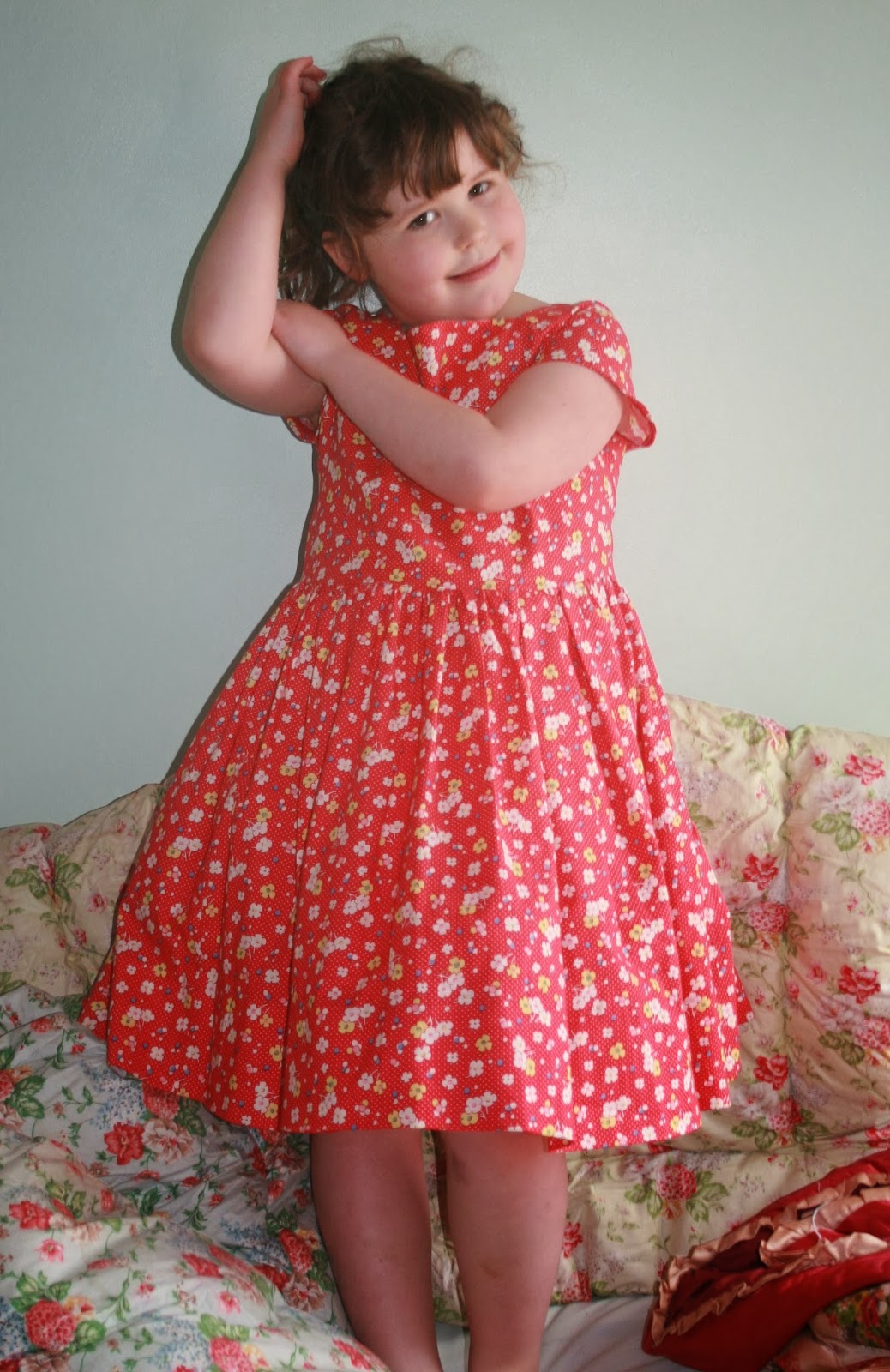 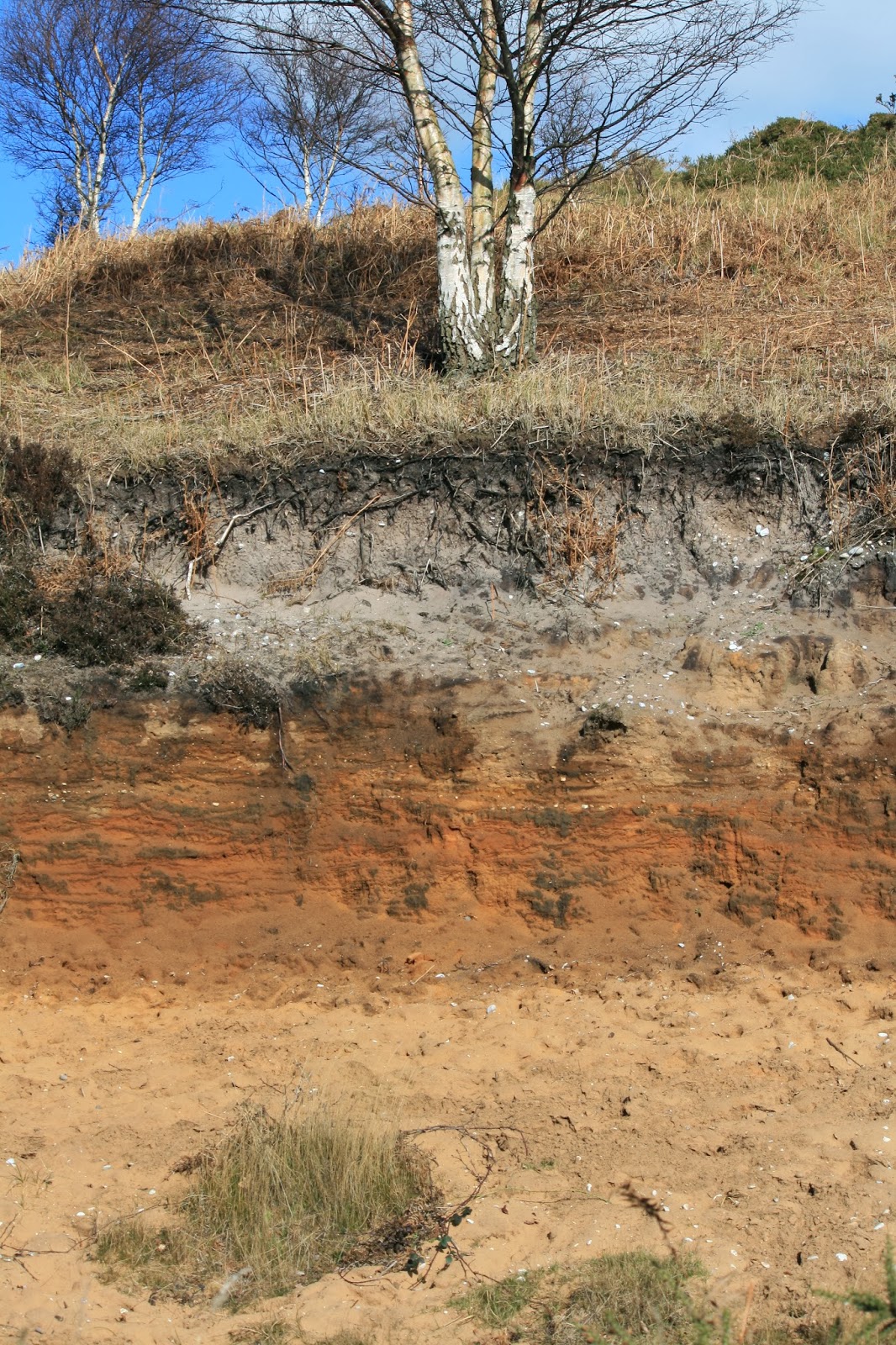 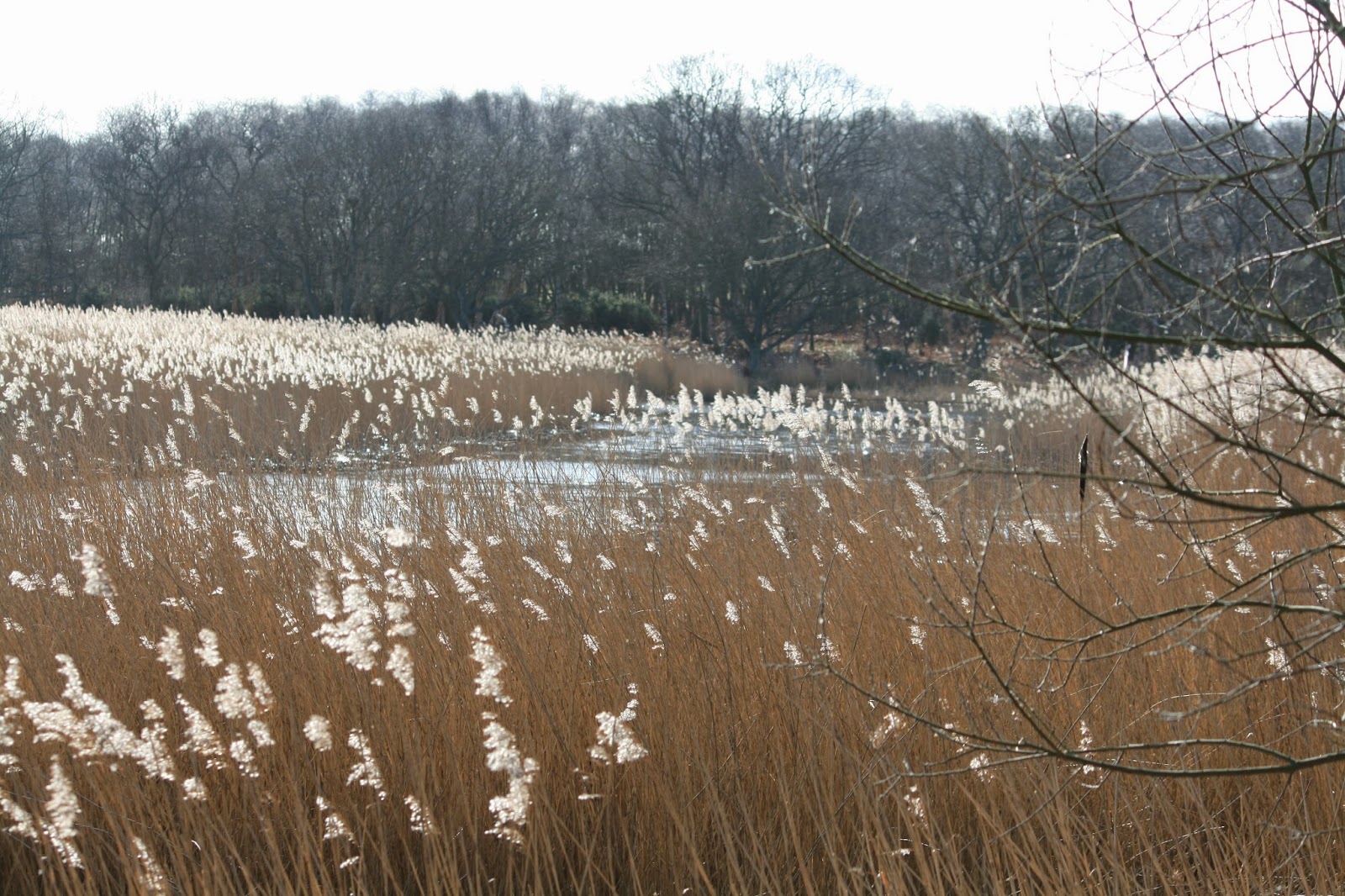 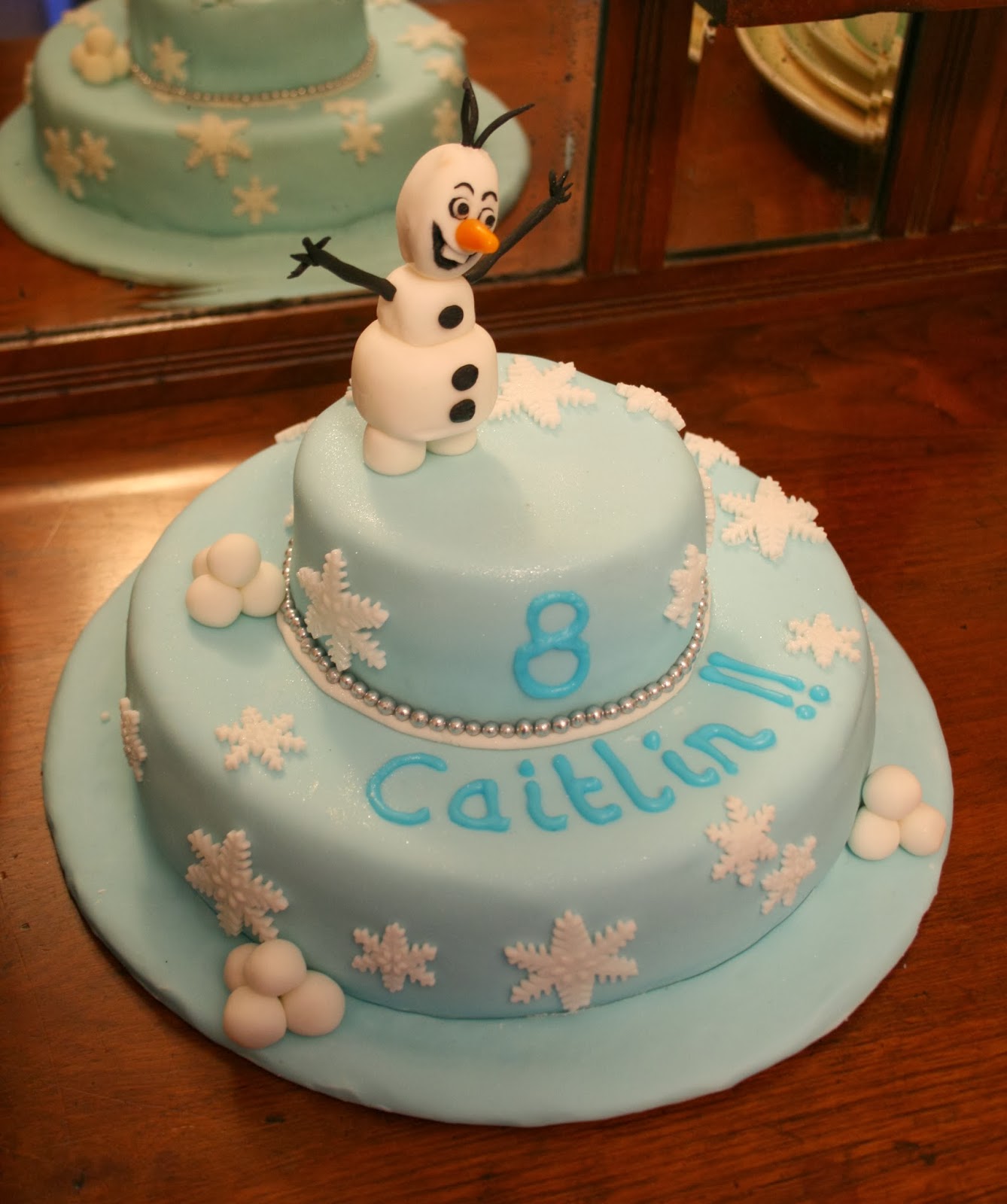 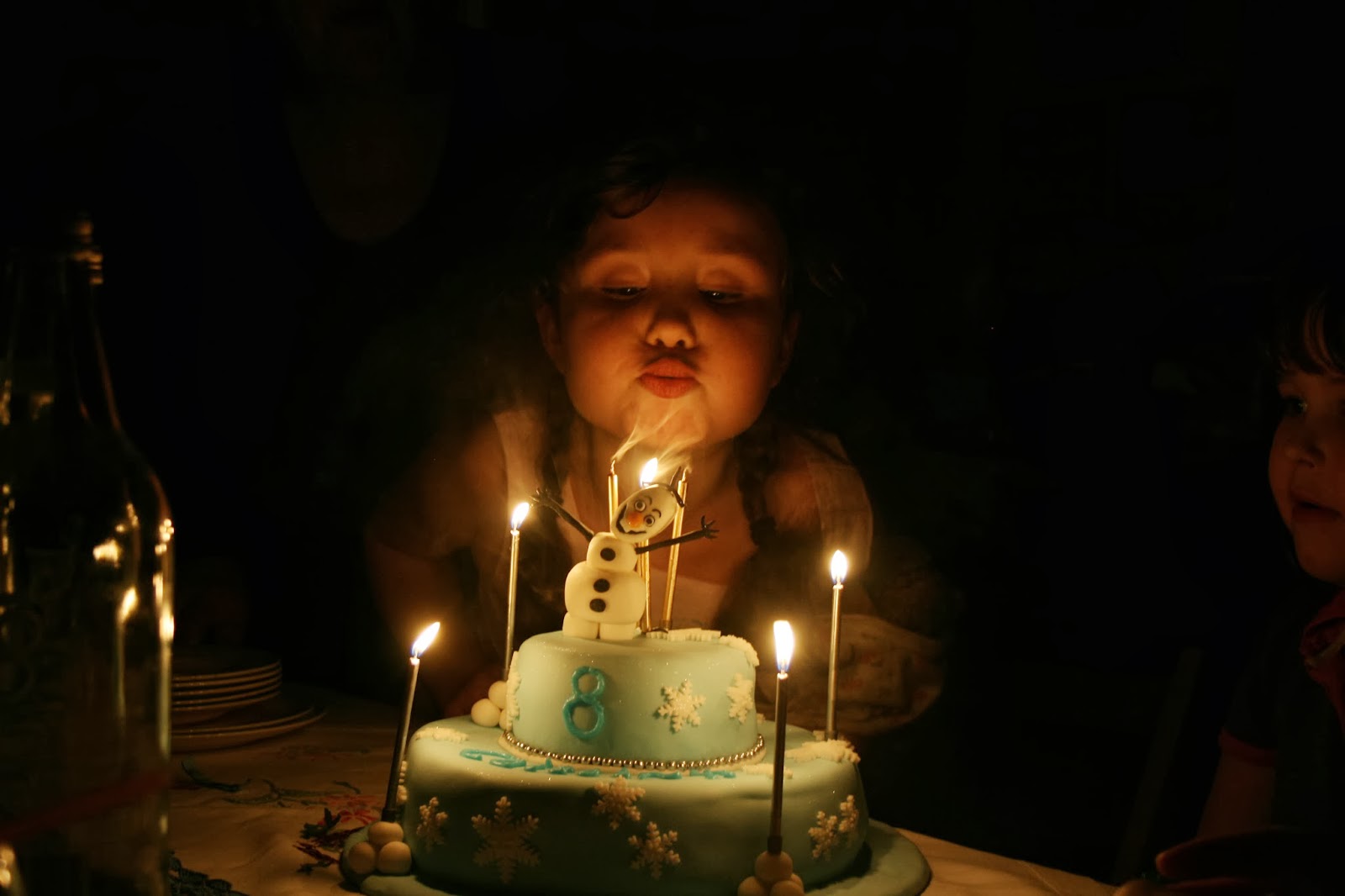