Every now and again, we step outside the knitting comfort zone and attempt a pattern that is more intricate than our normal offerings.

As soon as I bought this pattern, I knew it had to be attempted. 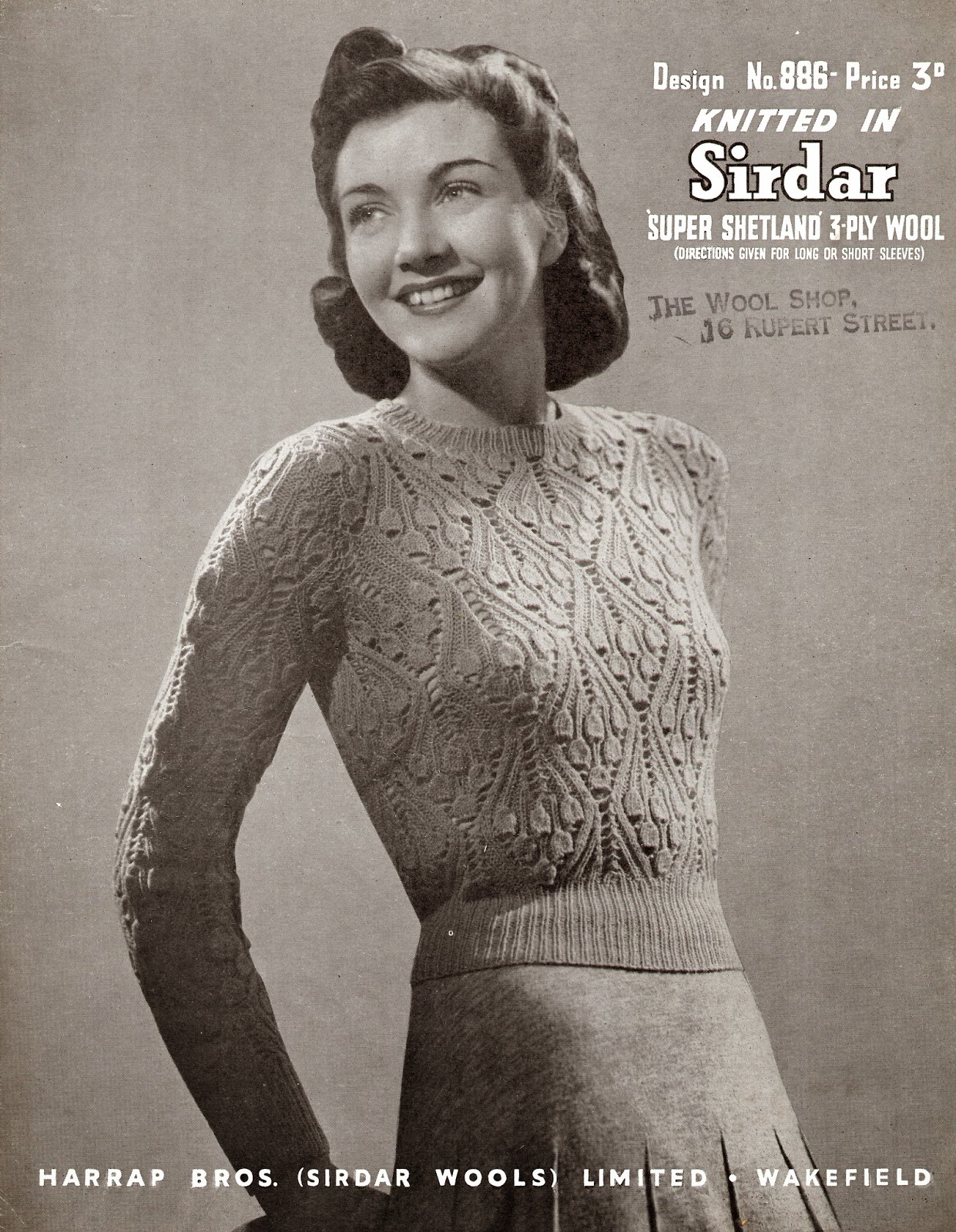 One of my favourite Spring flowers is the bluebell, so what better shade to choose for a jumper covered in said flowers than to opt for a springtime shade of blue?  Ordinarily, I’m not actually a fan of blue, and favour autumnal shades instead, oh, and green of course, you can’t beat a bit of green, especially that scrumptious 1930’s green!  :o)

Anyway, getting good 4 ply, which isn’t wool, in a shade other than your very basic colours, can prove troublesome, especially with blue, which is often offered up in baby blue, or dark navy, neither of which took my fancy.  However, good old Stylecraft came up trumps again, with a divine shade called aster.

When knitting a complicated pattern, I always want the stitch detail to show up.  I mean, what is the point in spending so much time knitting in a colour which is so dark that you can’t see the intricacy of the pattern until you are 12” in front of it??

Aster proved to be the perfect shade, showing up the little clusters of bluebells perfectly.  And what’s more, it was incredibly economical to knit, using just 190g of wool, which works out at roughly £6.00 for the materials.  Not bad, hey?!

The finished design is so pretty, a definite eye catcher, even from afar ;-)  The only slight downside is that it is a fairly open work design, so you would need to wear a little camisole underneath. 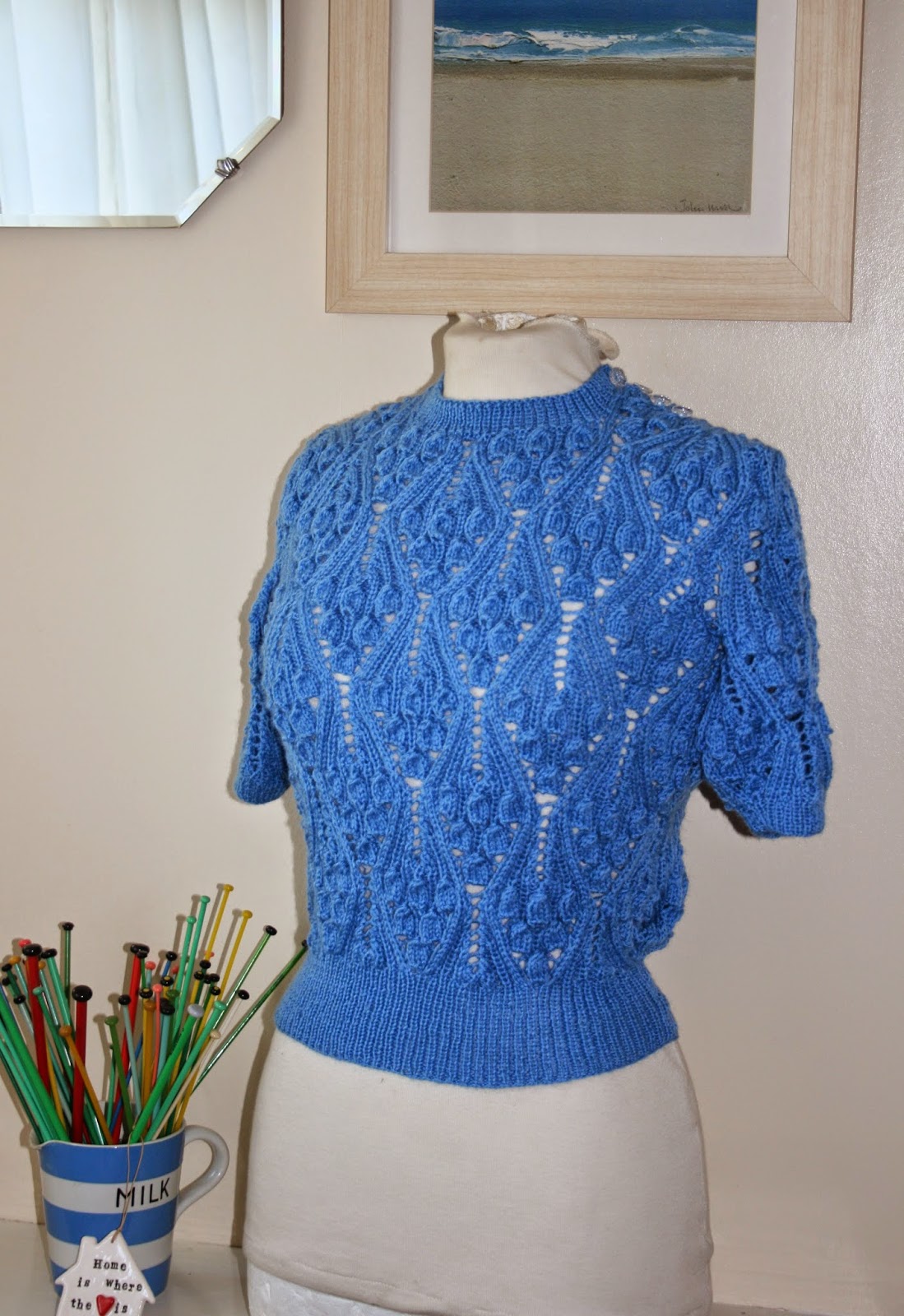 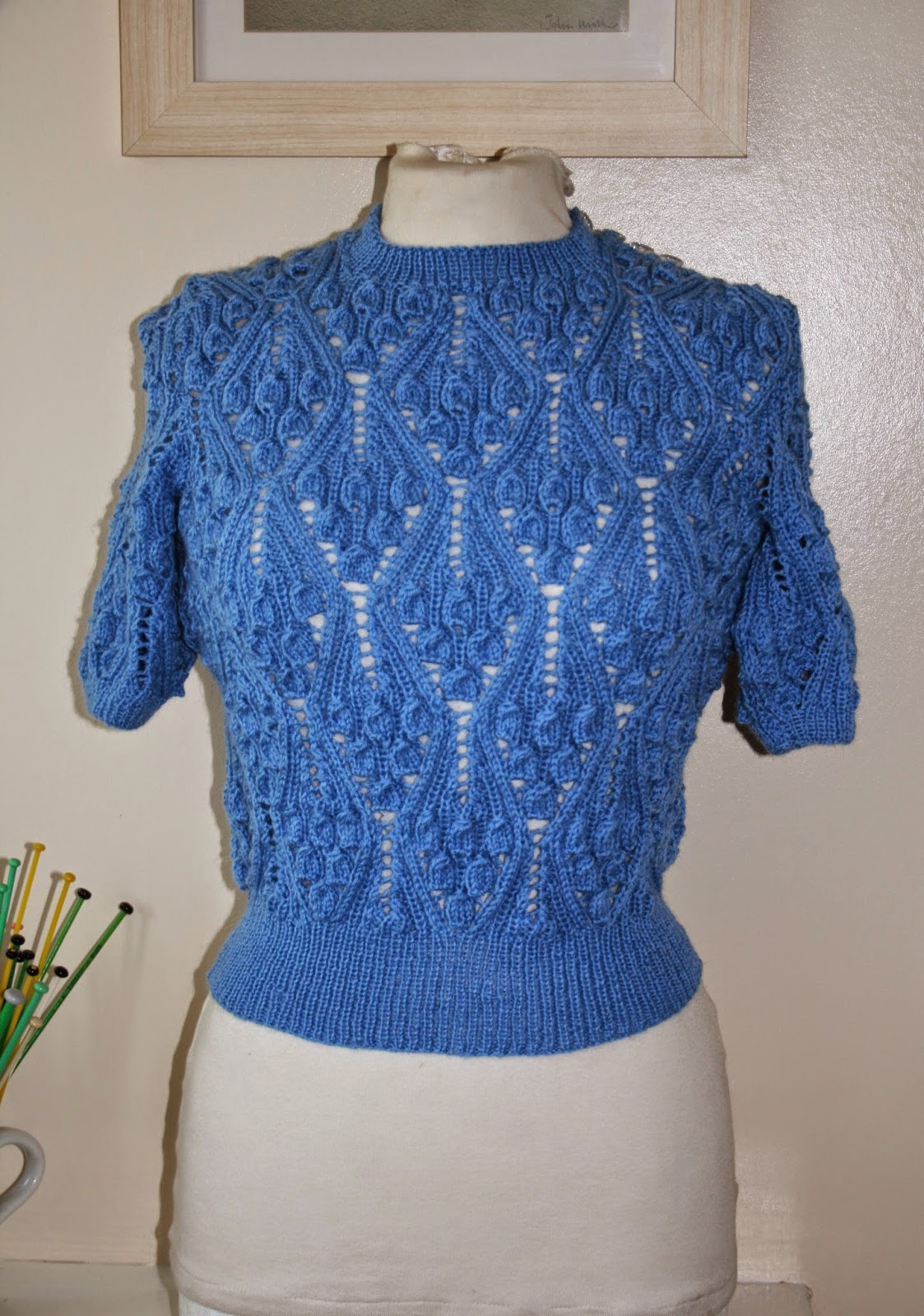 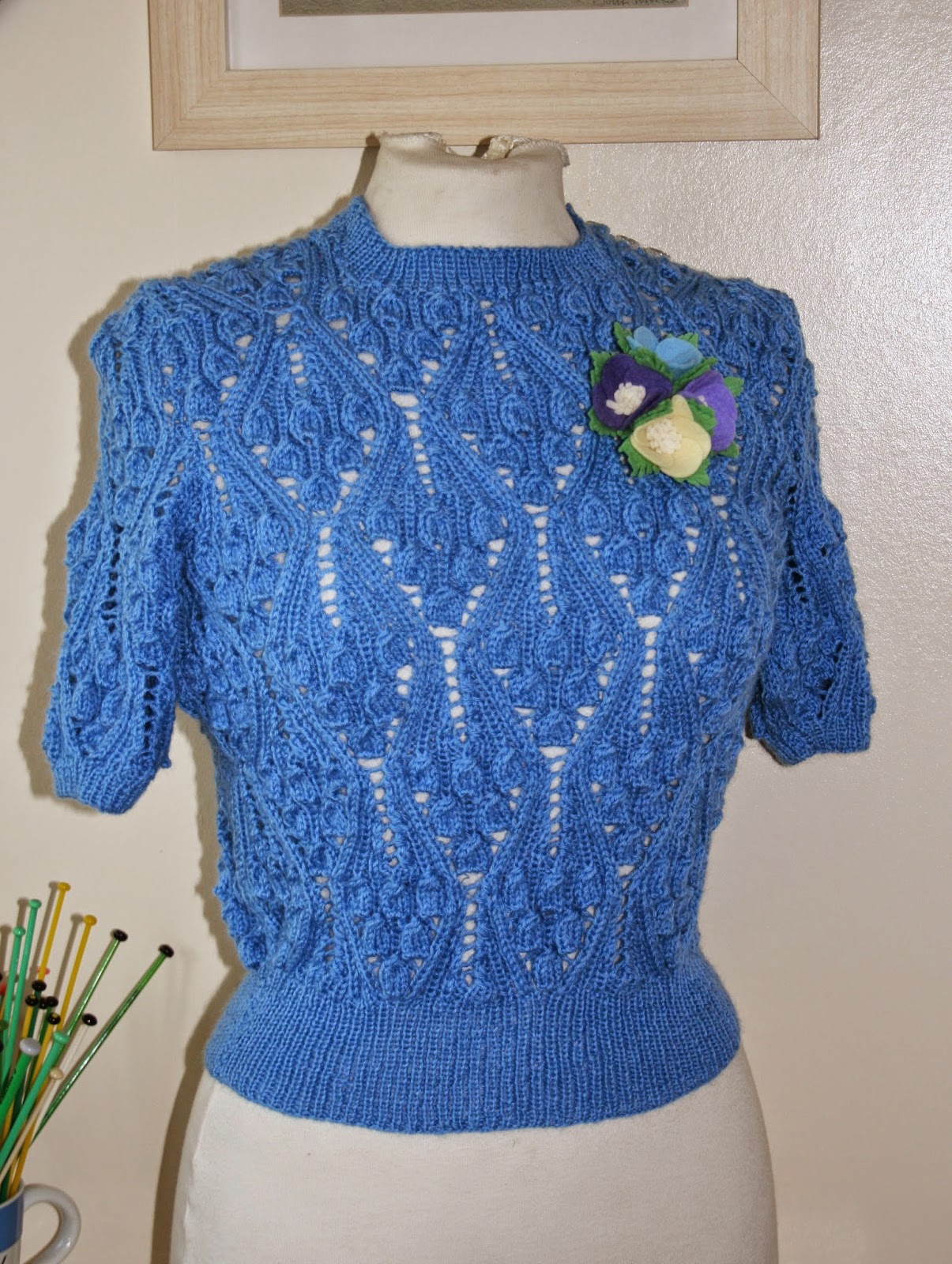 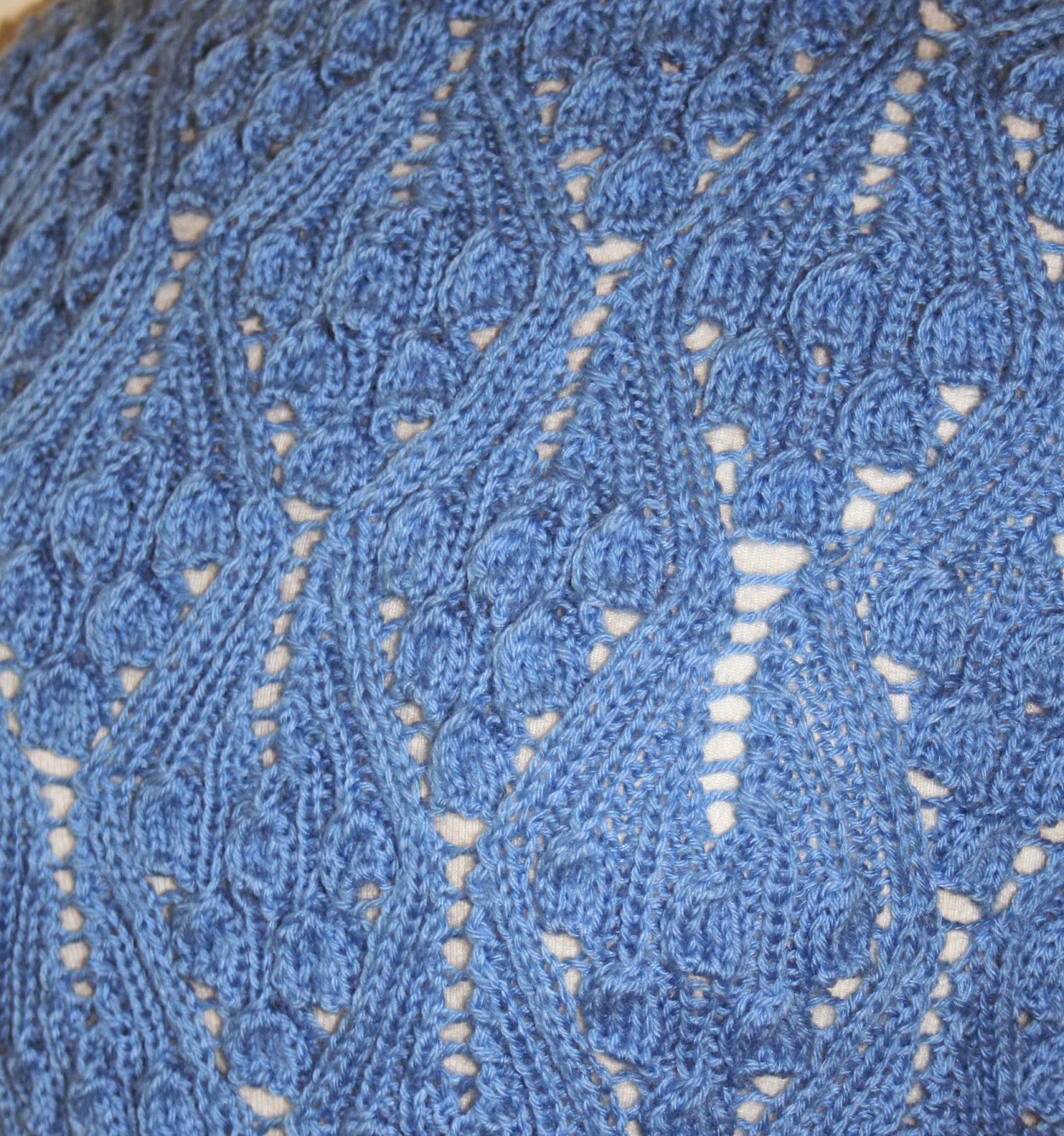 For anyone wanting to give this pattern a go, you can print off a copy of the pattern for free by clicking HERE.

Although I wouldn’t want to put anyone off from having a go at this jumper, I think it’s only fair to say that it isn’t really for a beginner.  It is an intricate pattern, with a pattern repeat of some 36 rows, and really does take maximum concentration.  I wouldn’t be confident sizing this jumper up by adding stitches, but you could go up or down a needle size to give a bigger/smaller woolly.  You may also want to look at the neck opening.  I found that it came up really small, so I adapted the pattern slightly, and added a buttoned neck opening to the left shoulder instead.