Life isn't allowing for much blogging time at the moment.  All is well here, but September brought with it the start of a new school term, and we're all a little bit busy!

I have lots of makes I want to get up on the blog, but I haven't the time for many words (that might be a good thing!!), so please forgive me for the photo overload!! xx

This dress was made from an original 1940's Anne Adams sewing pattern from America.  It was made using original 1940's rayon silk, which falls and drapes beautifully, but is a slippery blighter to work with!!  It is a generous size, and will fit a 46" bust, 38" waist and 48" hip. 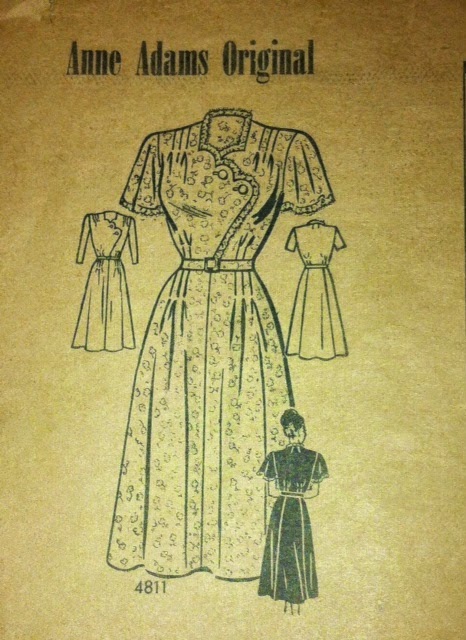 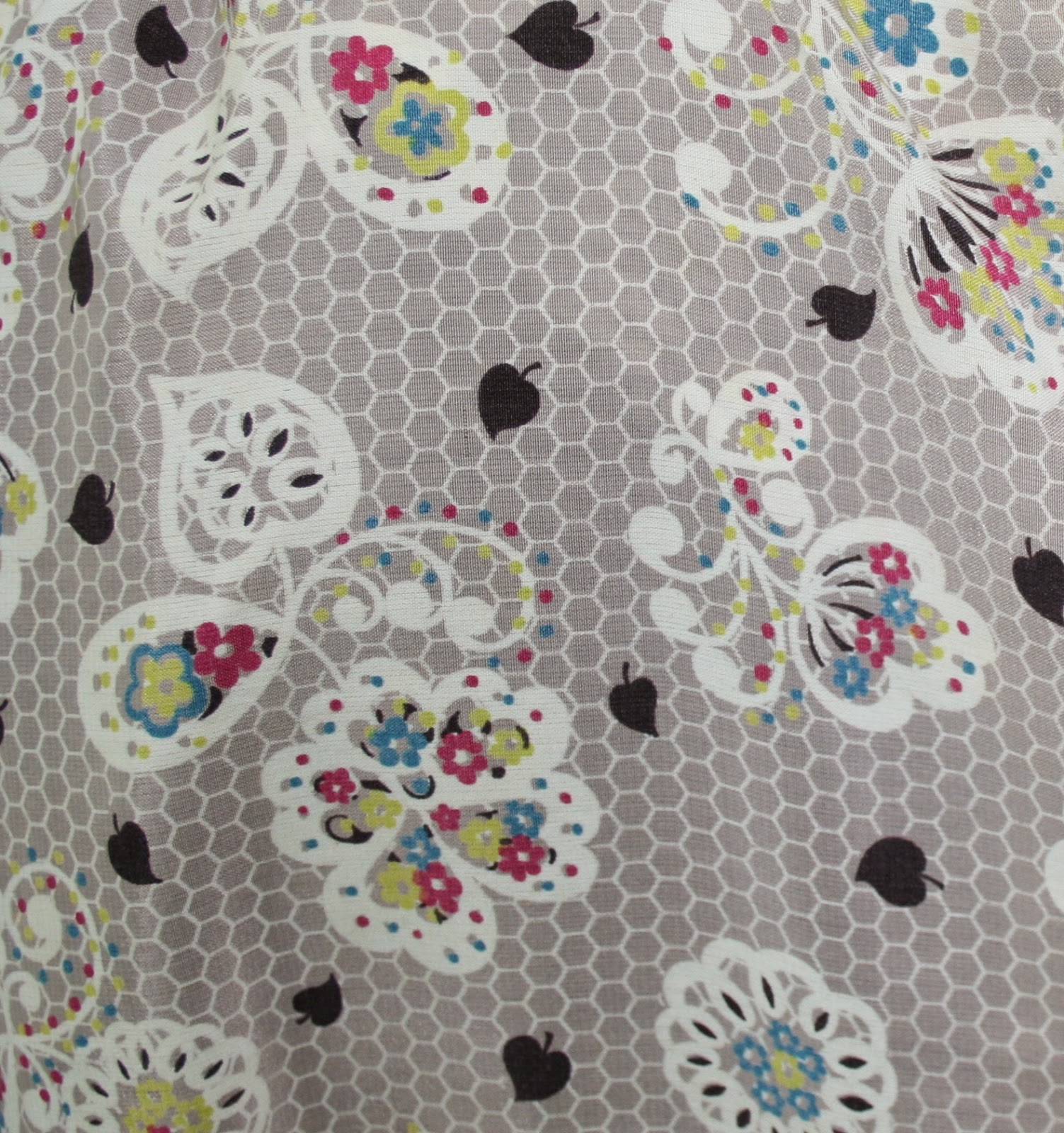 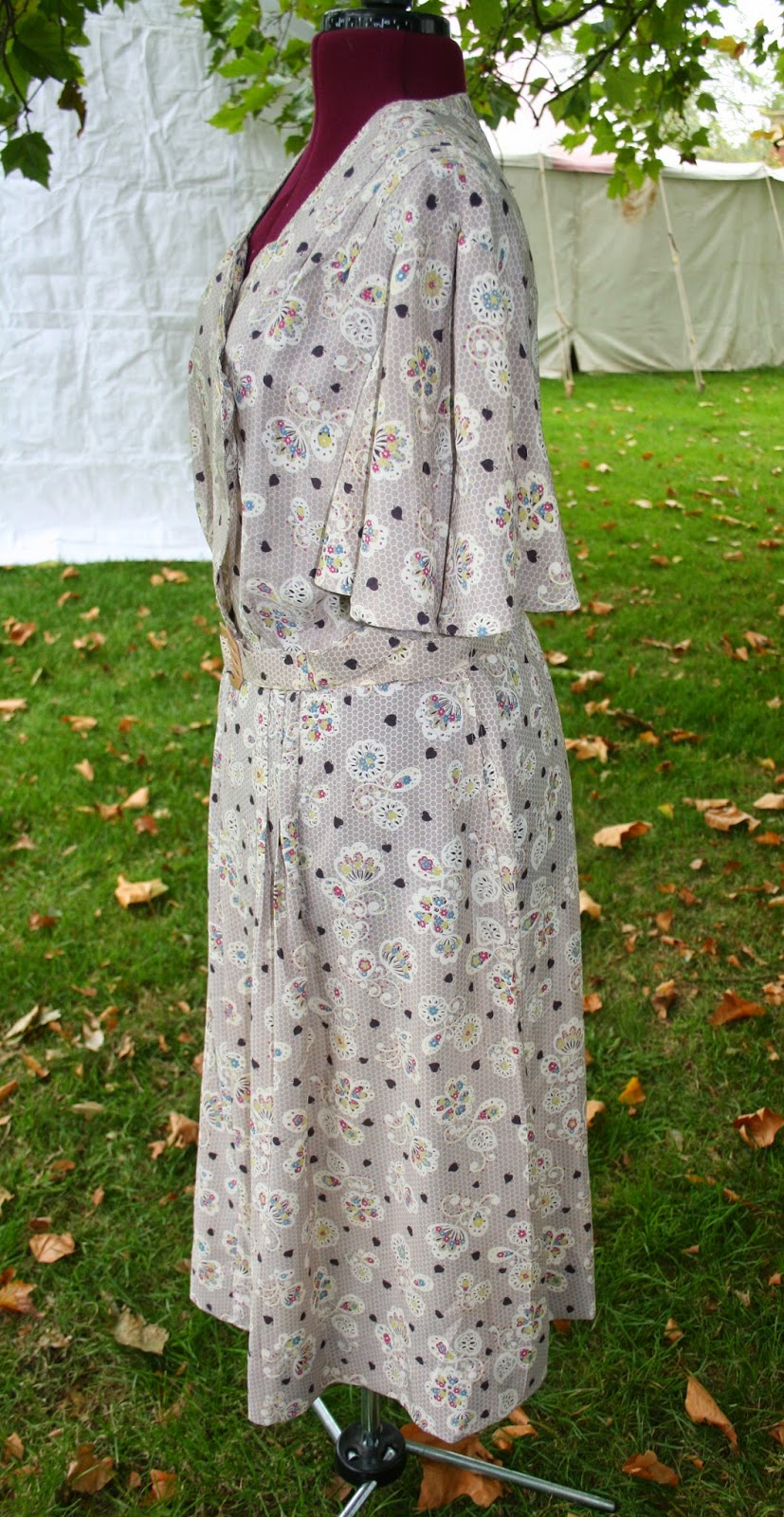 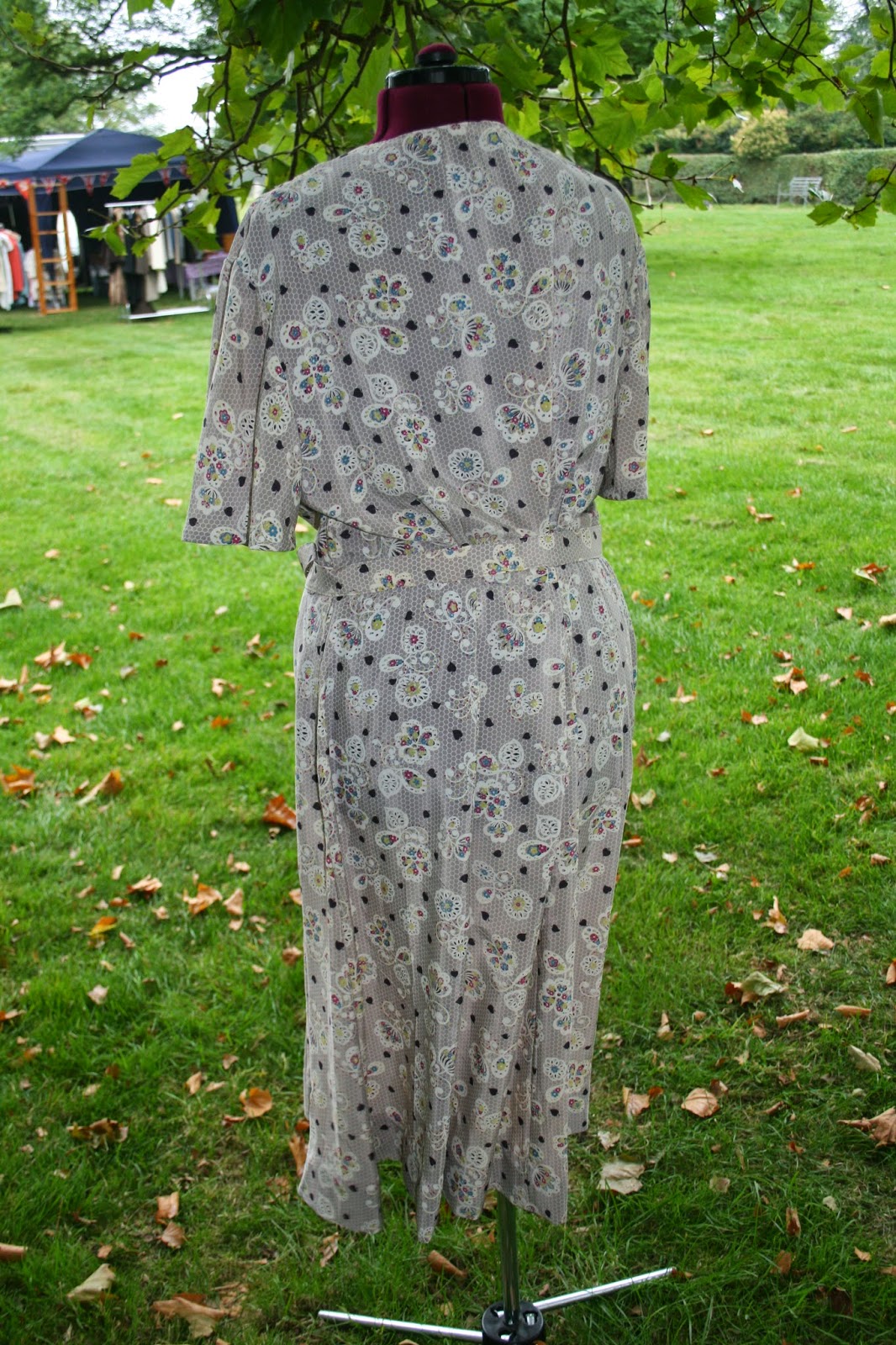 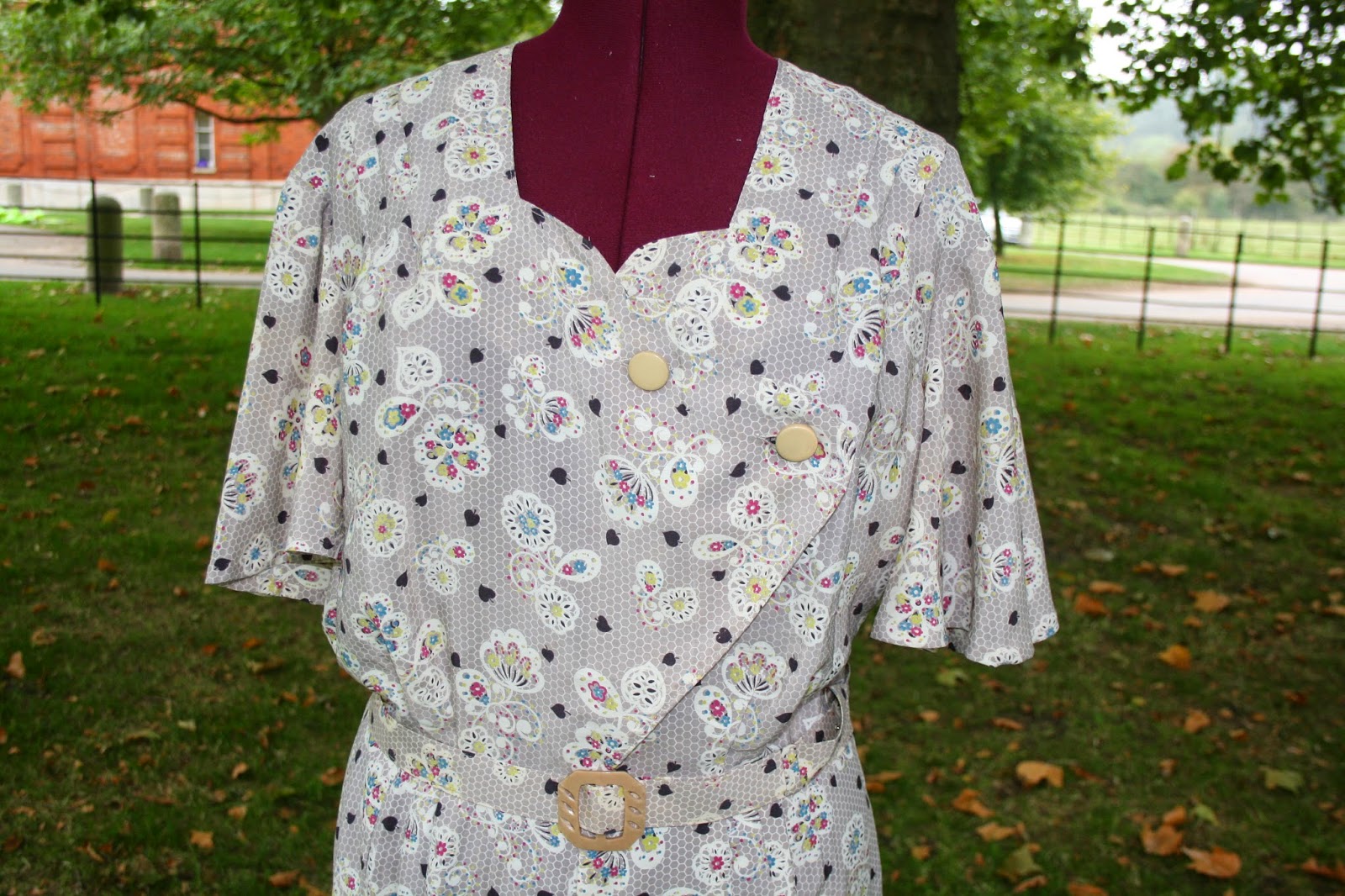 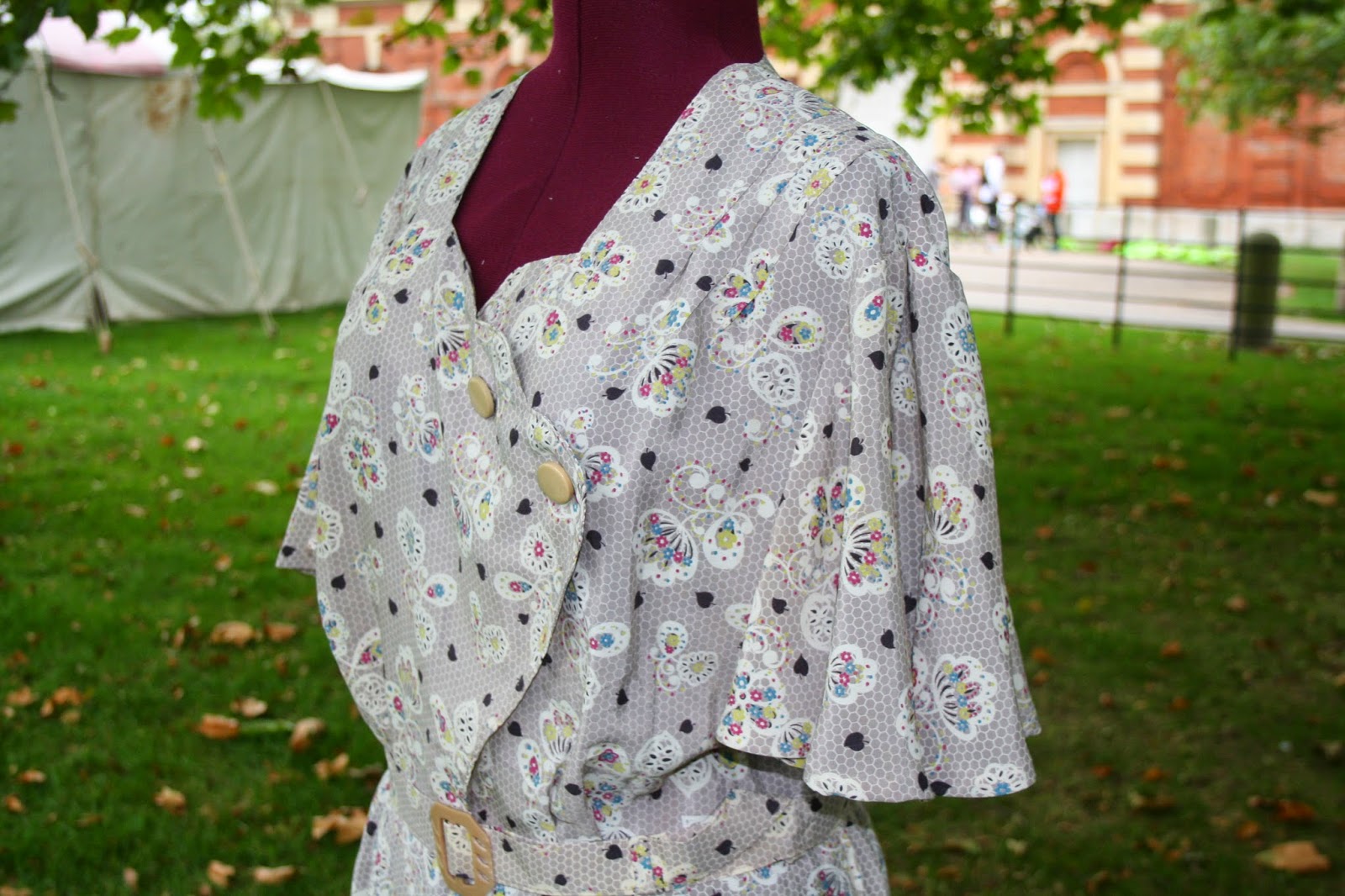 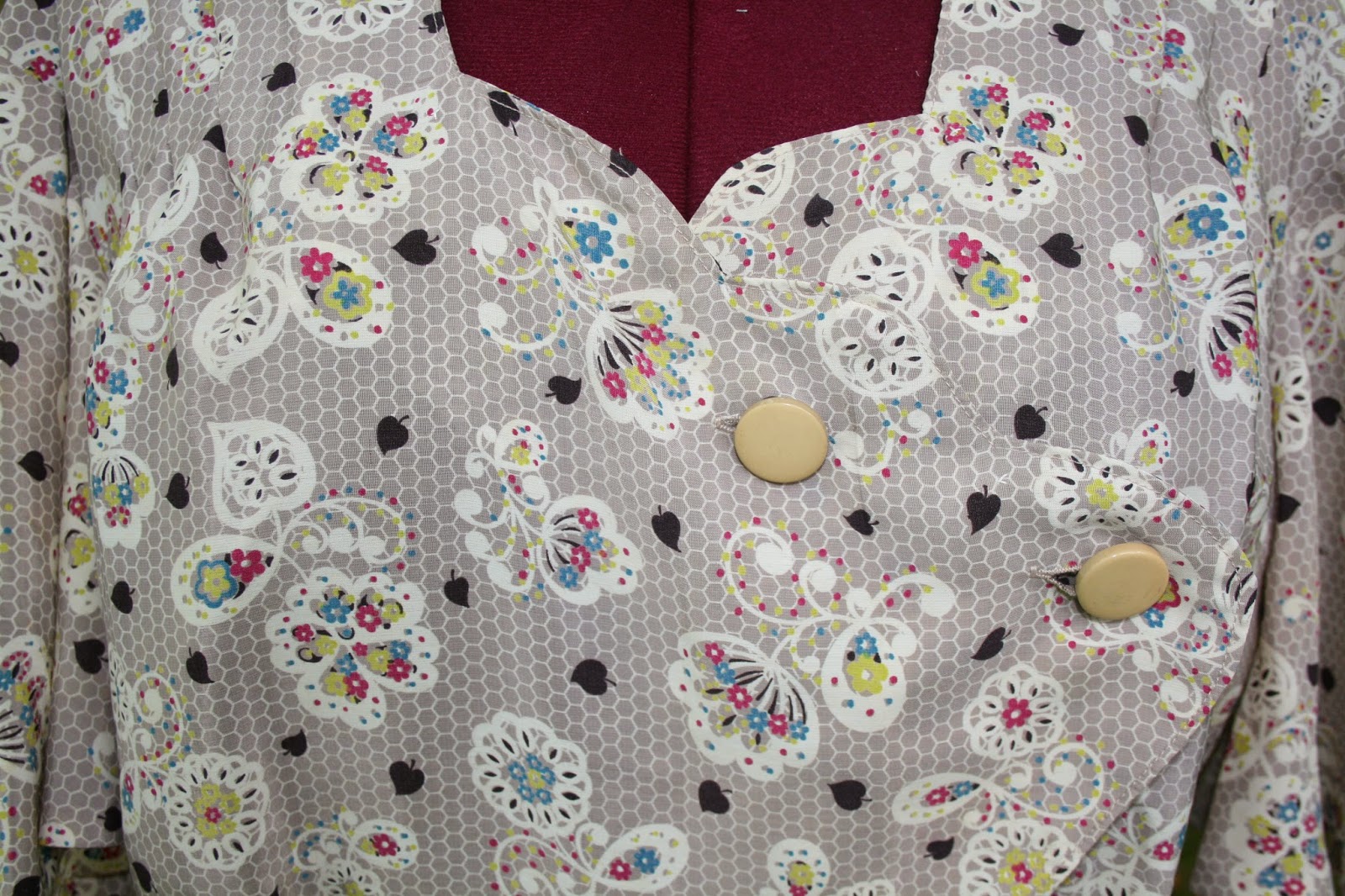 Ok, so the blouse I’m posting about today isn’t actually from .  The title refers to the design of the fabric which, you’ve guessed it, has a French theme, , none the less!

Trying to get on top of my, um, fabric hoard, I’m trying to adopt a kind of one in one out philosophy.  I keep amassing beautiful pieces of fabric, but don’t use it as quickly as I’m buying it, because knitting and felt work seem to take priority.  With the extended summer break, which is now almost at an end, I've been keeping my sewing machine busy, and am ever so slightly making a dent in the stash!
Whenever we go to events, one of the things we always hear people say is that they wish it the clothing was bigger.  There is no denying that your average wartime woman was smaller than the average woman of today.  So, with this in mind, I went about picking out one of my larger blouse patterns, and ended up going for this Vogue pattern from 1948. 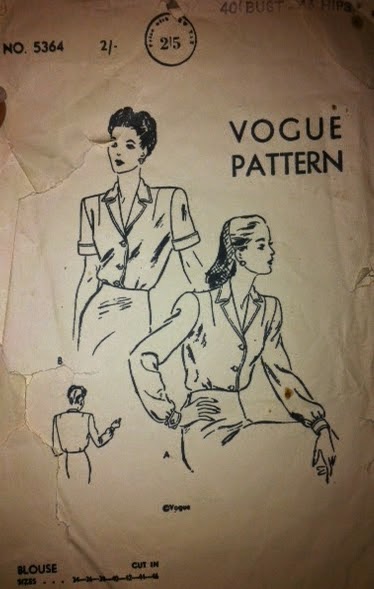 The blouse is quite a simple design, just three buttons, no fancy gathering or puff sleeves, quite a sleek, somewhat sophisticated, design, which I felt called for a similarly themed fabric.

Cue this little piece of loveliness. 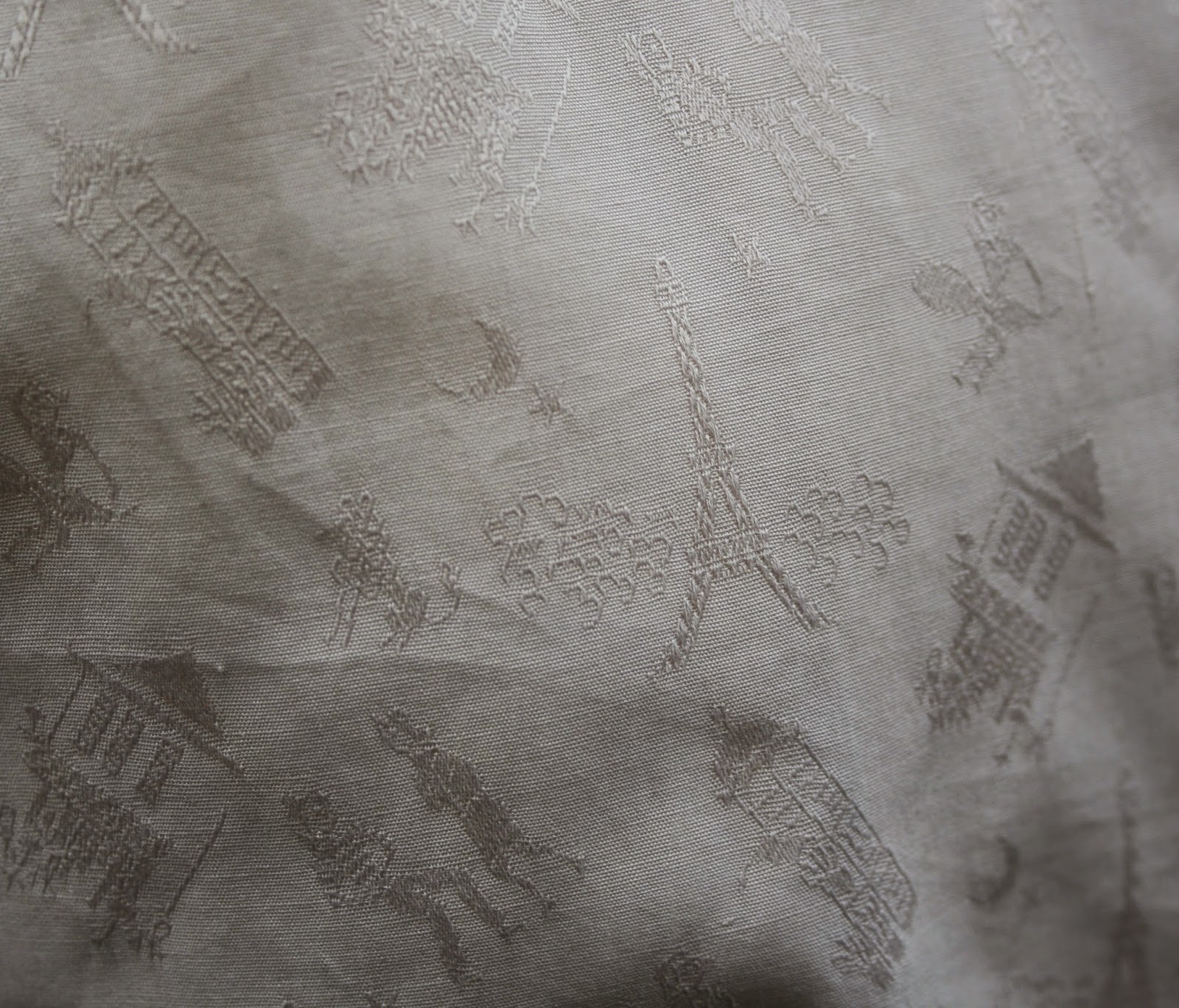 The fabric is a vintage, probably from the 1950's, and the photographs don't do it justice, because it is actually a really pale pink shade.

From a distance, it just looks like a plain old piece of fabric, but when you take a closer look, the fabric is actually covered in a French themed design of poodles, the , jive dancers, the moon, and some other buildings that I can’t identify!

Because the fabric design ran in an up down direction, the main pattern pieces all had to be cut in the same way, i.e. top to bottom, all pointing the same way.  It was a tight squeeze, and there were only fragments of fabric to spare.

Matching buttons to the fabric was more of a challenge than I thought it would be.  Because the fabric has a sheen to it, plastic buttons would be too dull in comparison, and therefore glass was the only way to go.  Clear glass looked totally wrong, so in the end, 3 rather scrumptious vintage pink champagne coloured flower buttons were the best option. 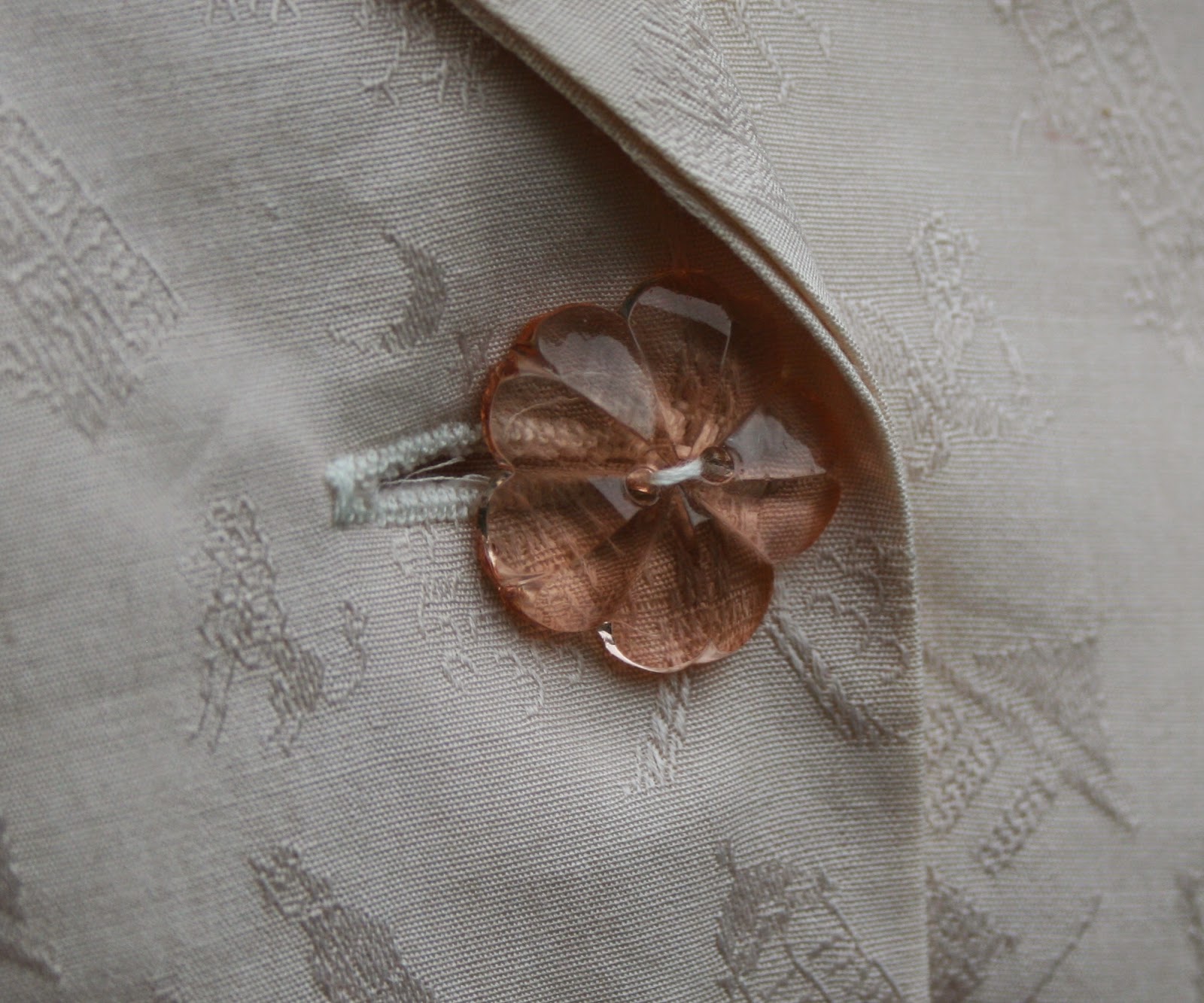 Regrettably, 2 out of the 3 buttons have a tiny nibble on the back, as is often the case with 50+ year old buttons.  Personally, I don’t think it matters.  They are vintage buttons, and it does happen, but I’m hoping the new owner won’t mind either.

The blouse has been photographed on a dummy which is far too small for it, hence the overly baggy look, and the fact that one sleeve looks longer than the other!  It is pictured with the skirt from an original 1940's pin stripe suit. 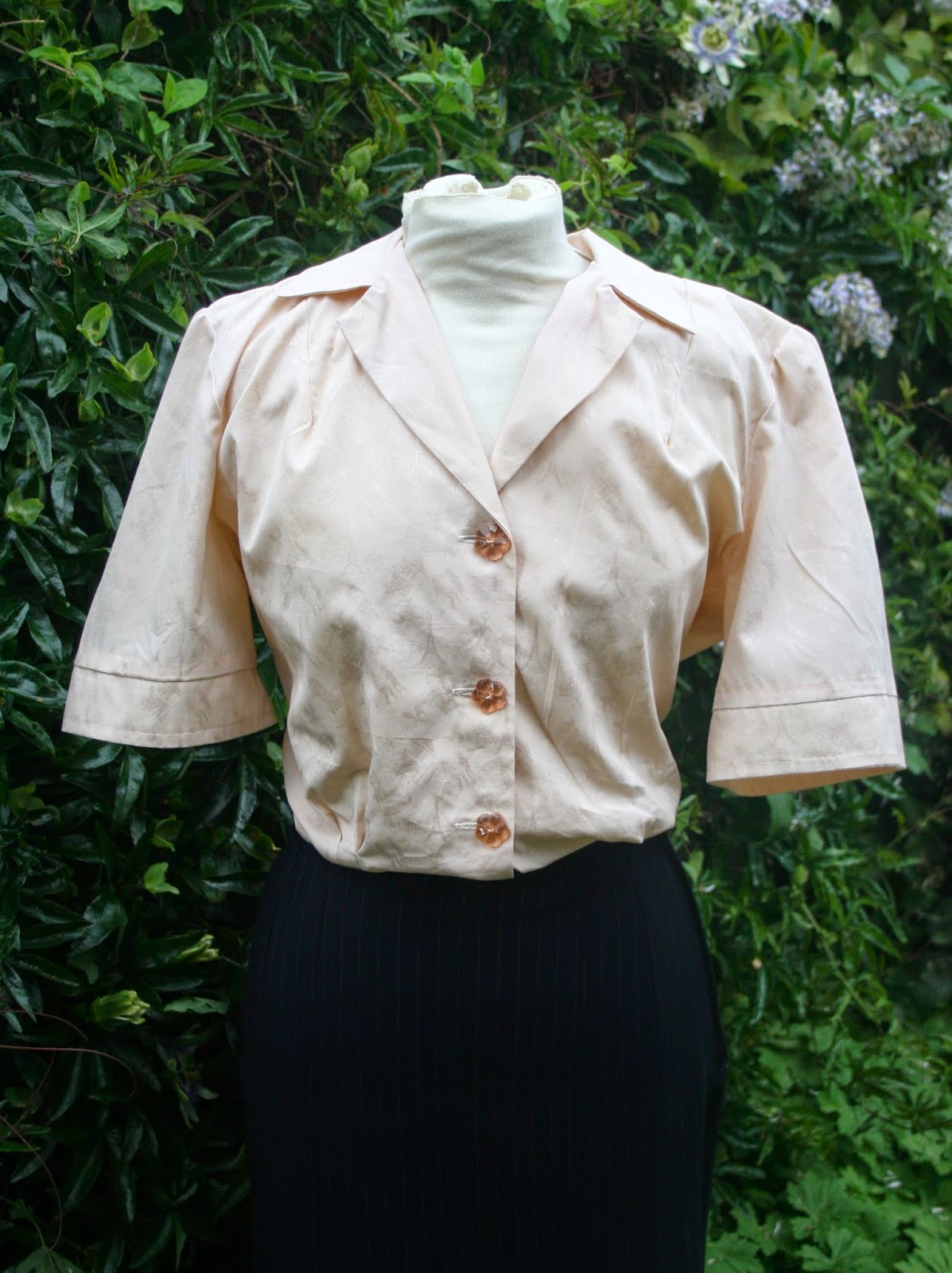 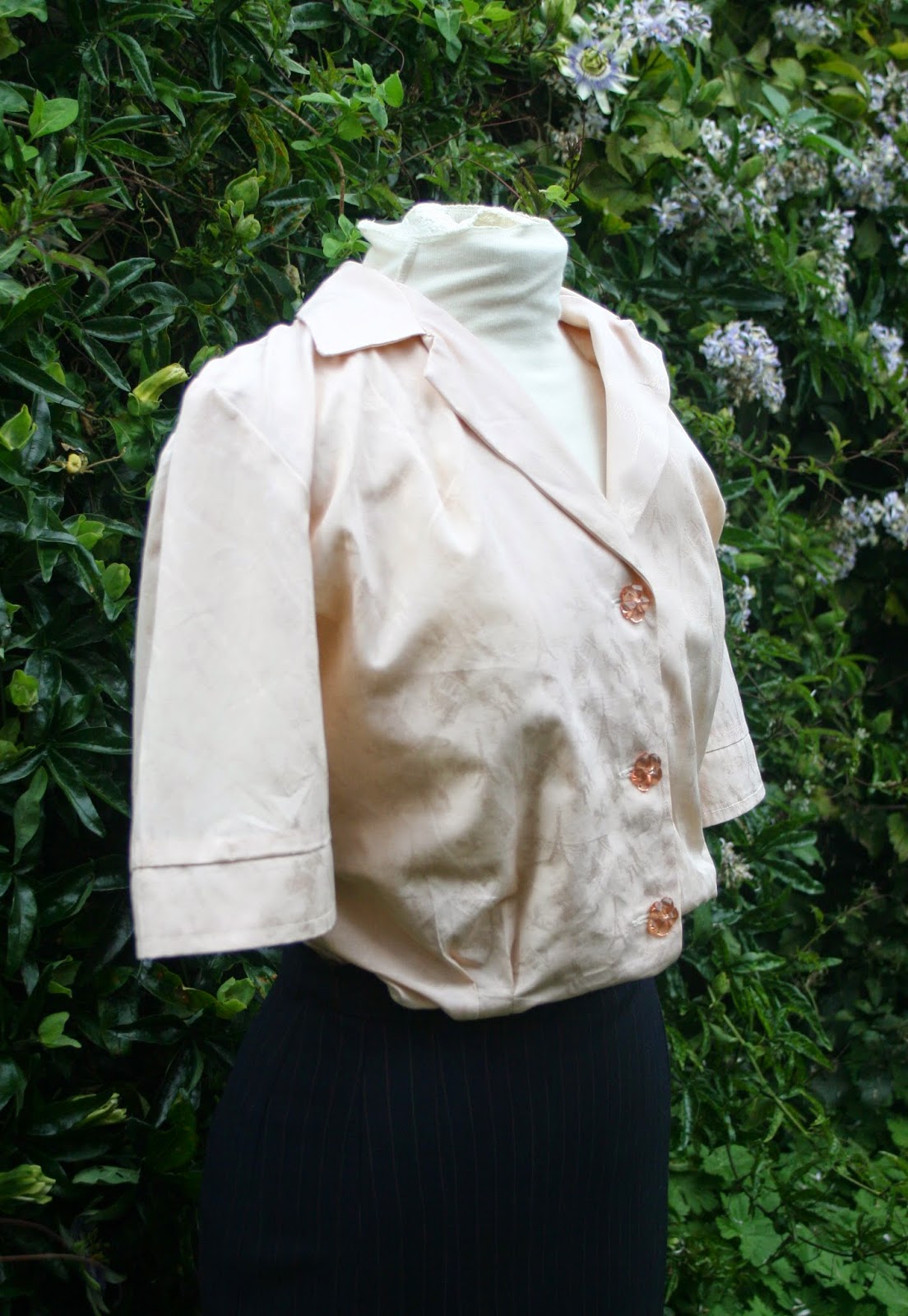 The pattern was a dream to work from.  I didn’t have to make any changes to it at all.  All the pieces fitted easily together, and the entire thing took less than a day to construct, although it took me weeks to actually do the final finishing!!
Posted by Lucy at 08:00 5 comments: