Hasn’t it turned decidedly cold?  I’m sitting here, looking out of the window, ignoring the ironing, willing for the white stuff to start falling.  I’ve seen plenty of picture postcard views from other parts of the country, but has avoided a covering, much to my girls’ annoyance.

They are off on a jolly with their grandma today, the first time this year.  Lunch and a spot of beach combing are on the cards; so I’ve got a small window of me time, in which to share with you my recently finished bolero.

I rather like a natty little bolero.  They were quite popular in the 1930’s and 1940’s, and could be found in both the fabric and woolly variety.  I have quite a few patterns for the knitted sort; some lacey, some simple, others hideously complicated.  After much deliberation, (choosing a pattern is a complicated job, don’t you know), I opted for the blackberry-stitch bolero, a Bestway pattern from the early 1940’s. 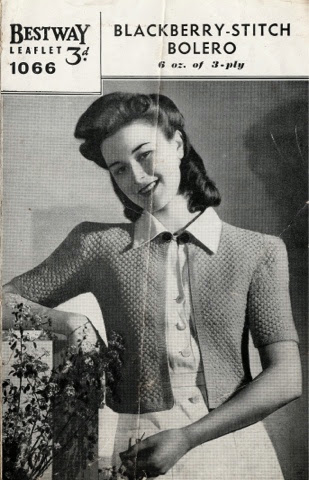 Quite a while ago, many months, maybe even years, us wool hoarders loose track of our stash, I picked up 4 balls of Jarol Heritage 4 ply. 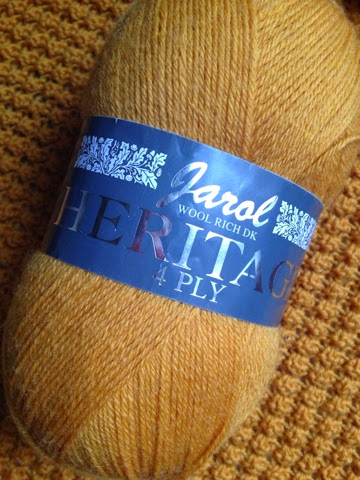 Jarol wasn’t a brand I’d heard of before, but on a mission for mustard shades, the Heritage range popped up in the search results.  The shade I used was No.140, which is a warm mustard/ochre.  It’s not the cheapest of wools, working out at about £5.00 per 100g, but it is worth the money, because the quality is there.  It’s a 55% wool, 25% acrylic and 20% nylon mix which is, apparently, washable at 30 degrees, although I always advocate hand washing the woollies I knit.  Although there is some acrylic in it, it doesn’t shine in the sunlight like some of the cheaper brands do.  It’s a dull, matt colour which, I know I’m not describing very favourably, is perfect for an authentic reproduction piece.

About 7 years ago, when I first started knitting, and progressed beyond 6” squares, the first thing I knitted up was a blackberry stitch turban, worked on huge needles.  The joy of blackberry stitch is that when worked on larger needles, it knits up quite quickly.  This bolero was knitted on 8’s, so I could really see it growing, which is always a plus in my book.

I actually made a sleeve for the bolero back in the autumn last year, but with commissions and Christmas prep, everything got bagged up until it was rediscovered in a cupboard on New Years.  Sunday evening knitting was made all the more palatable by being able to watch Foyle's War. 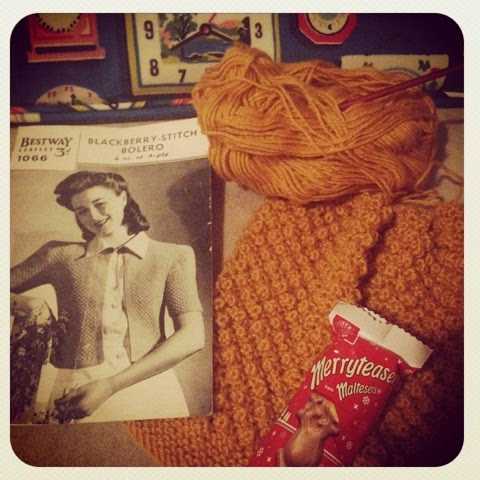 I often wonder how long it actually takes me to knit a garment.  Because I knit as the girls work, or in the car, or while I watch television, I don’t notice time ticking by.  So, New Year, new start, and all that, I thought it was about time I actually found out.  So I timed myself!  Yep, armed with my trusty stopwatch and a piece of paper, I recorded how long it took me to knit every single piece.  I even timed how long it took me to pin, press and finish it.  The grand total was 46 ½ hours, which I don’t think is too bad. 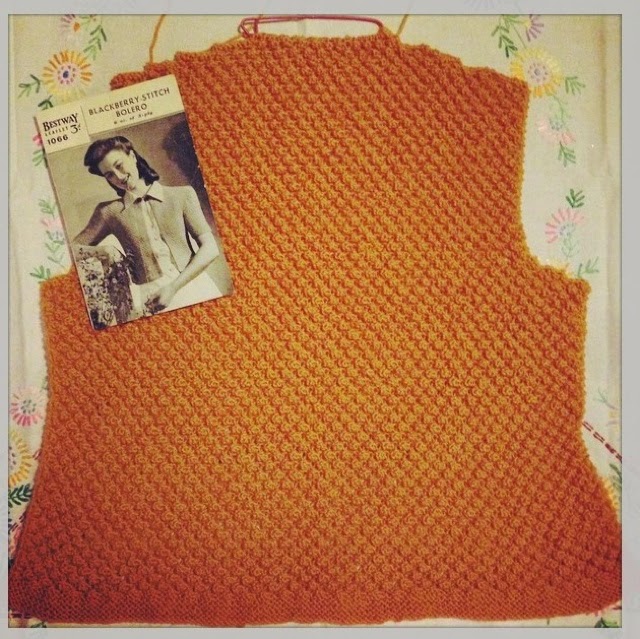 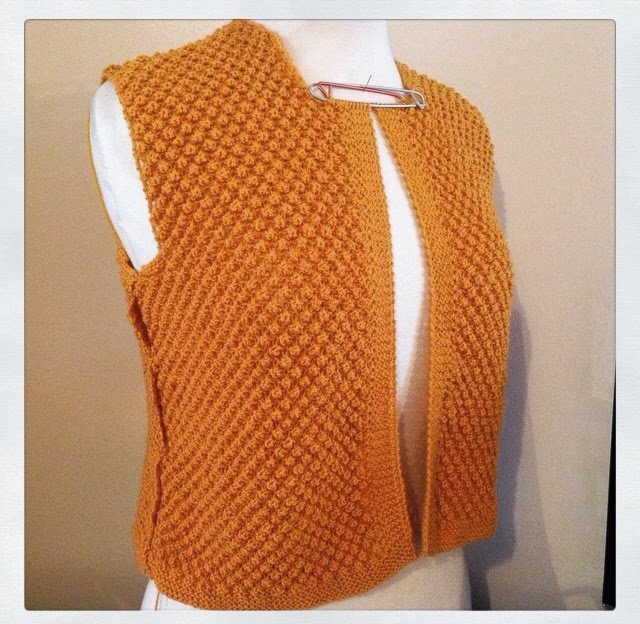 I would have finished it sooner, but I foolishly tried to knit the second sleeve while full of snuffles, and so my cotton wool brain fluffed it up, and I had to start the sleeve over again!  Note the curly wool from ripping back the sleeve! 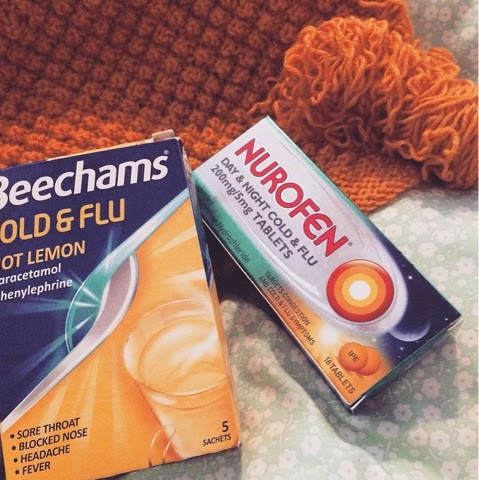 Sometimes patterns turn out as per the original, but sometimes they don’t, and this was one of those.  Although the pattern was nice and simple to follow, with a really easy pattern repeat, the sleeve tops didn’t go together as they should, so rather than putting in the pleats as suggested in the original, I gathered them instead.  The finished bolero also ended up being 4” bigger in the bust, coming out as a 38” rather than a 34”, but that’s not the end of the world.  Sorry about my photographs, they aren’t the best but it’s been so dull here.  I think the sun has gone on strike! 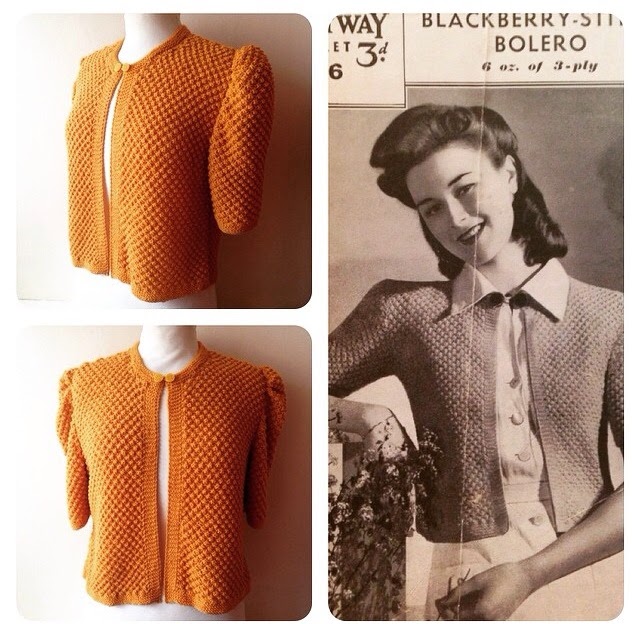 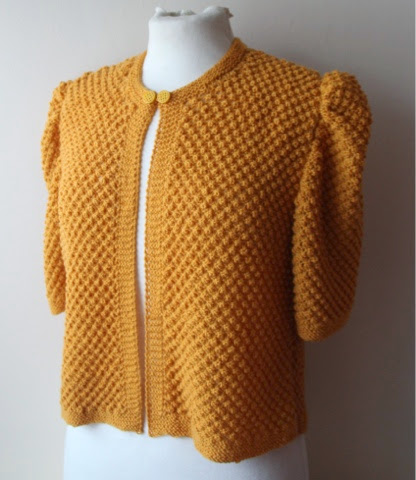 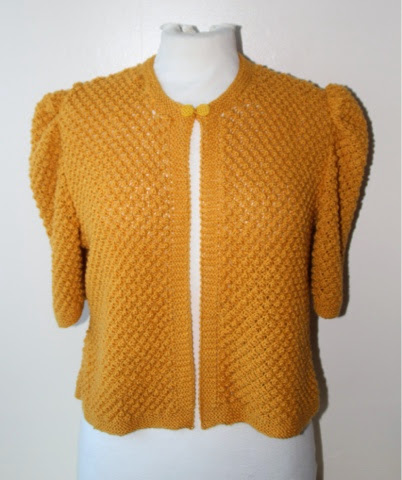 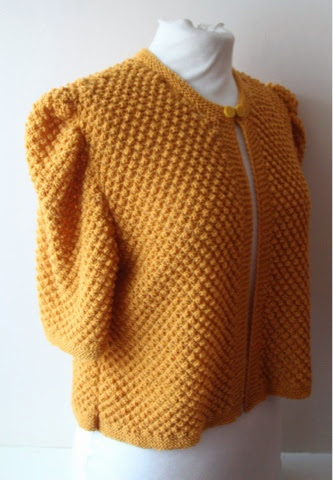 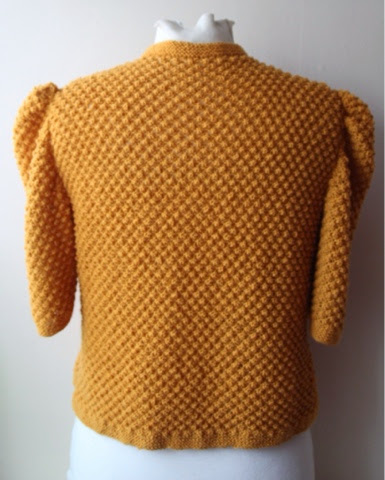 If you fancy giving this one a go, maybe in a cornflower blue or pistachio green ready for Spring, I have put the PDF pattern in my Etsy shop, which you can find here.

Another woolly post today!  Not a garment that I've completed this year, I'm not that speedy, but one I managed to squeeze in just before Christmas.

The jumper in question is the one I knitted for my mum.  In 2013, as well as giving shop bought gifts, I made my family and close friends a handmade Christmas present.  Some edible, some felty things, others woolly.

I hadn't really planned anything similar for 2014, we'd had such a busy run up to the festive season that making gifts for family hadn't even crossed my mind.  However, come mind November, I realised I'd be disappointed in myself if I didn't make something for my much loved parents (why do we put such pressure on ourselves??) so I sorted out the patterns and wool and cracked on!

My mum's pattern was an easy choice, it was one she'd long admired, a stylish long sleeved jumper from a pattern originally printed in "My Home" in May 1936. 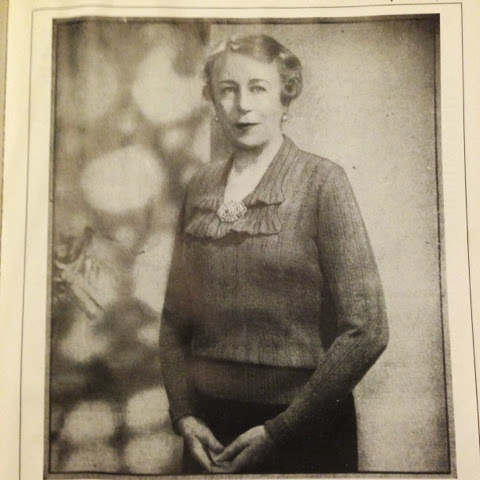 The pattern was found in "The 30s Family Knitting Book", edited by Jane Waller, and printed in 1981; proves that loving vintage isn't a "new" thing!

I opted for Adriafil Azzurra in Azio Blue as she, unlike me, loves the pretty colour. 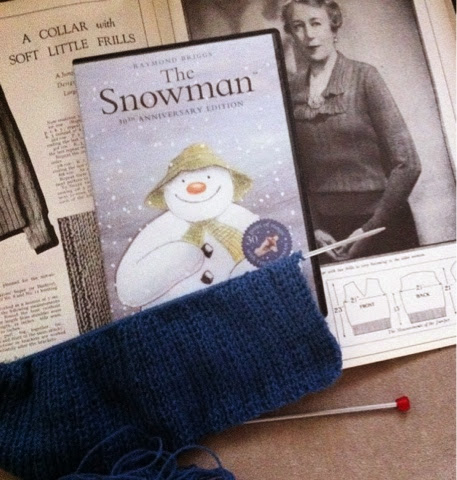 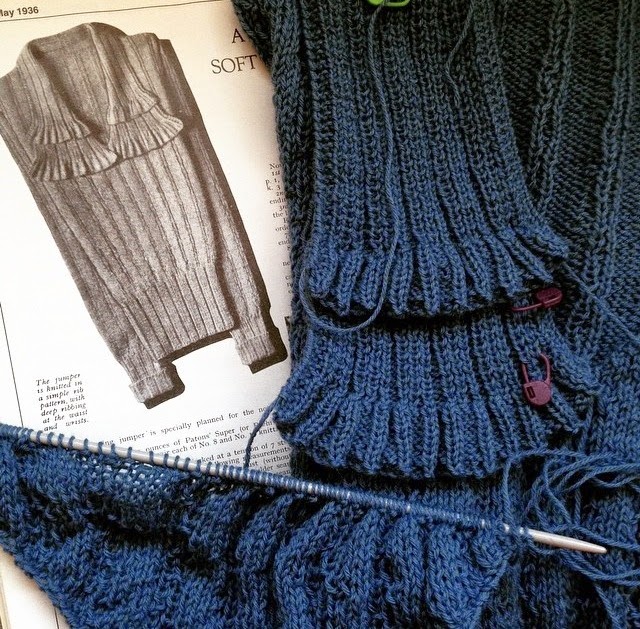 I did struggle a bit with my tension on the sleeves.  They are worked from the top down, and the heavy size 8's with such few stitches on we're hard to handle, so I switched so short double ended needles, and that helped a bit.  I use metal needles, but am going to try some bamboo needles to see if they are easier to handle.

I'm really pleased with how the jumper turned out, and more importantly, so was Mum!  It's not my best work, I can see a couple of wrong stitches, but as I put on the gift tag, every stitch was done with love, and that counts for a lot in my book.

No chance to show you a picture of her wearing it yet, so you'll have to make so with some shots of it on the dummy :)  Please excuse the rubbish shots, they were taken on my phone one evening, and the light was appalling. 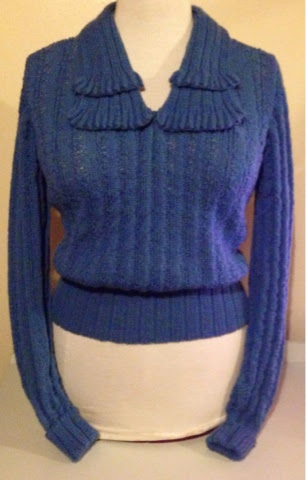 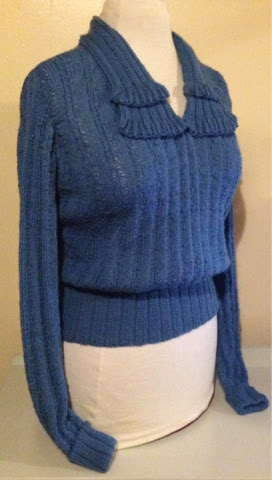 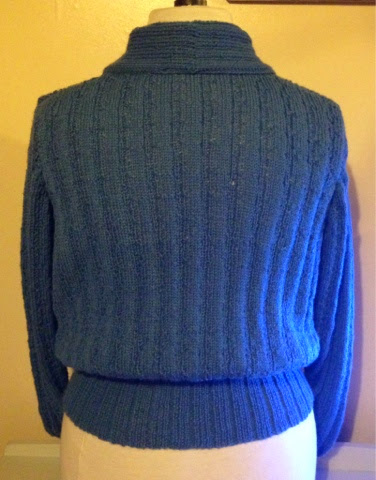 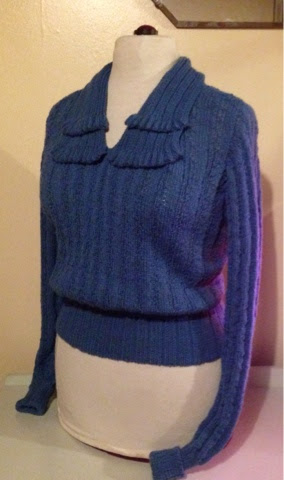 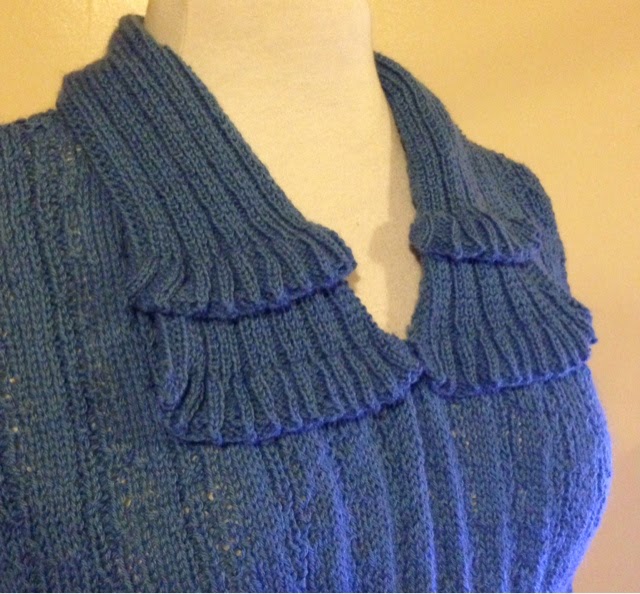 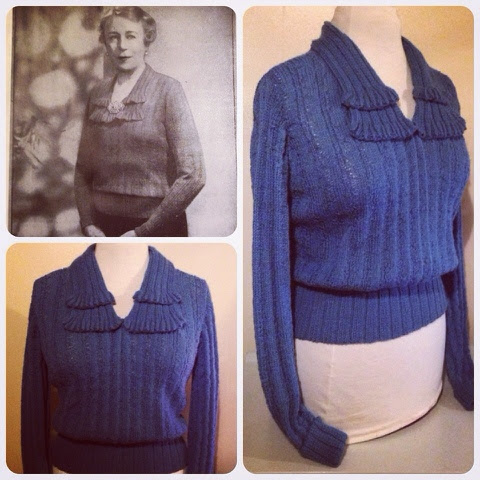 I'm currently working in a bolero in a scrumptious shade of mustard, and will soon be picking up the needles on my next commission piece xx

There's certainly no denying that 2014 was a busy year on the jumper front.  Thank you for your lovely comments on my last post; I'm glad you enjoyed looking at all the pictures as much as I did :o)

Over a year ago, I decided I wouldn't take commission orders anymore.  Problems with non-paying customers, issues with customers changing their mind once I'd started, or even worse, customers not liking the design of the piece, despite it having been their choice, put me off the process.  I kept knitting, but I knitted the patterns that I wanted, in the wool I wanted and in the colours I wanted!

After a much needed break of doing as I pleased, and after countless emails asking whether I would knit to order, I decided to change the way I took commissions.  I now take payment for the wool upfront, am more particular about the type of wool I will use, and most important of all, I've learnt to say no when someone asks me to knit something that I really don't want to knit.

I had the pleasure of knitting for some truly fantastic people last year.  My final commission piece for 2014 was no exception, and was probably one of my favourite to work on.  It was knitted in a glorious shade of green and was, in the most part, all stocking stitch, so a nice quick knit.

It was knitted in Adriafil Azzurra and the pattern was a Bestway pattern from the late 1940's. 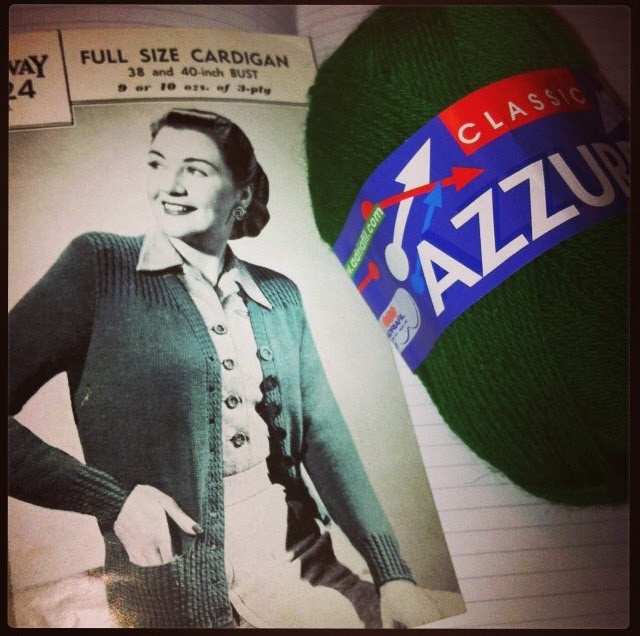 I've knitted a few cardigans in the past, but I've never done one that required so many buttons.  Nine matching vintage buttons proved quite tricky, most of my sets had either four or eight, but I raided my own personal stash and found the perfect vintage set, heavy carved ones from the 1930's. Pretty, don't you think?? 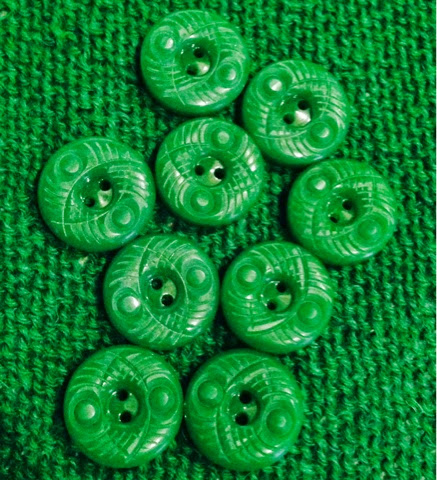 The pattern was nice and easy to follow, no little quirks or tricky bits.  It knitted up quite quickly (I was running it alongside another woolly), and everything fitted together nicely when it came to making it up.  The thing that took me the longest was the placket, it seemed to go on forever!!! 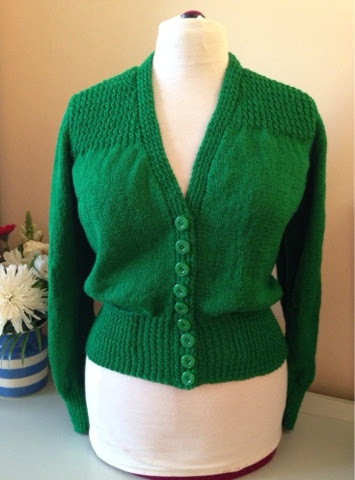 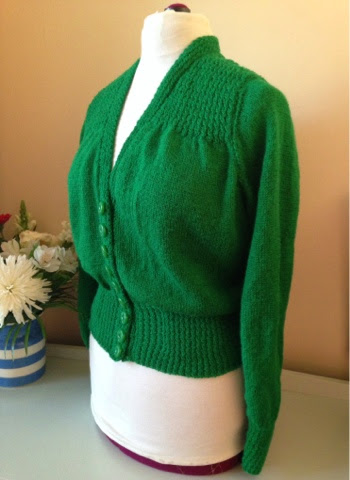 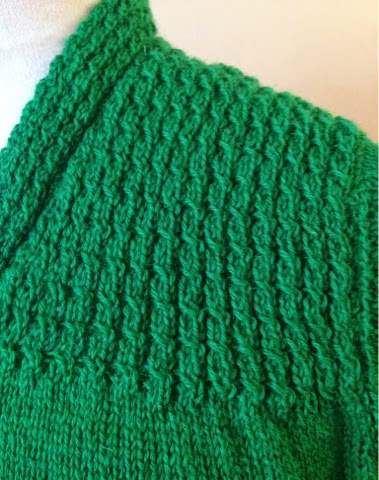 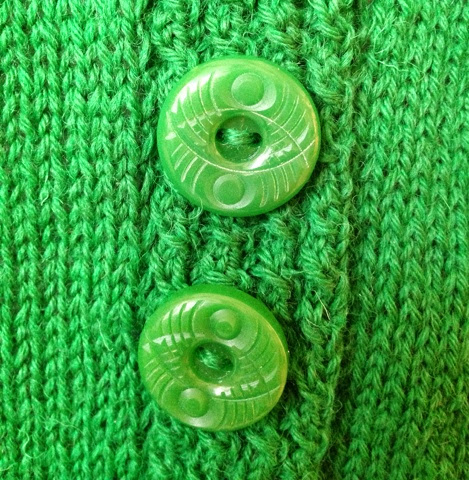 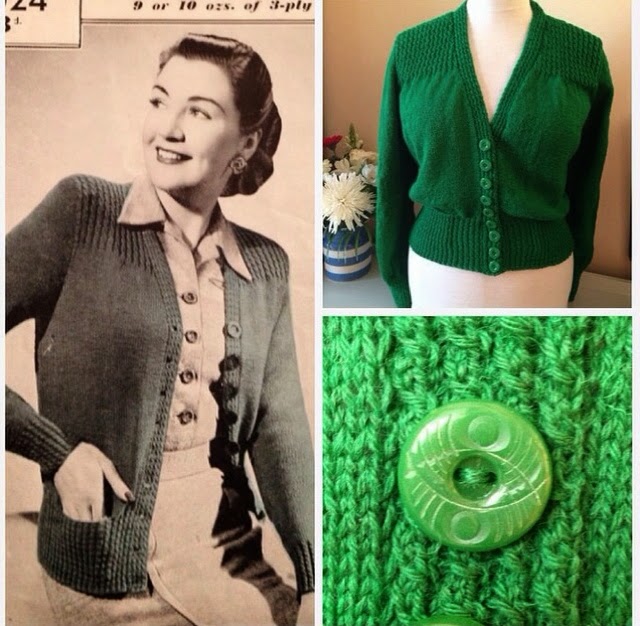 The cardigan has a new home with the very talented Kitty Lou who is an incredible seamstress who has an Etsy shop, Kitty Lou Vintage, which you can find here.

Mr Y is back to work on the 5th, so normal routine will resume.  I can't wait to start my next commission!